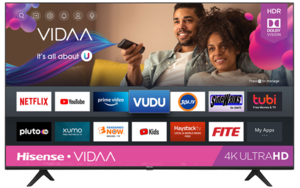 SANTA ROSA BEACH, FL, March 10, 2022 /24-7PressRelease/ — 30A Media (30ATV) is excited to announce the signing of agreements with VIDAA Smart TV operating system to include 30A TV live broadcast channels in their manufactured Hisense, Toshiba, and other Smart TV’s. Vidaa, based in Atlanta, aggregates quality content for viewers, who can search via remote or by using voice search.

Vidaa’s current household reach is above and beyond 8 million in the United States, 4.6 million in Europe, 4 Million in Latin America and 3 Million in Australia/Asia.

“Vidaa is the superior operating systems for Smart TV’s,” said Paul Vizard, CEO of 30a Media. Vidaa leads the way in aggregating content into name brand televisions. Not content with Hisense, Vidaa is available in Toshiba TVs, with non USA distribution in Europe and Australia.”

About 30a Media
Broadcasting 12 live 24-7 channels of engaging content, 30a Media as a ROKU® and AMAZON Fire TV® channel developer, 30a Media is dedicated to compiling content delivery for large YouTube® channels who wish to explore the television market.

For more information on 30A Media visit www.30a.media

About VIDAA
VIDAA Smart OS is a Linux-based open smart TV operating system. The independent company VIDAA USA was established in 2019, and it has – in just two years – become a strong global contender in the smart TV platform space. As of May 2021, the most advanced version on the market is VIDAA U5, which saw further improvements in user experience by implementing Google Assistant capabilities, its voice service, the new VIDAA remote control smartphone application, as well as advertising and billing services in select markets.