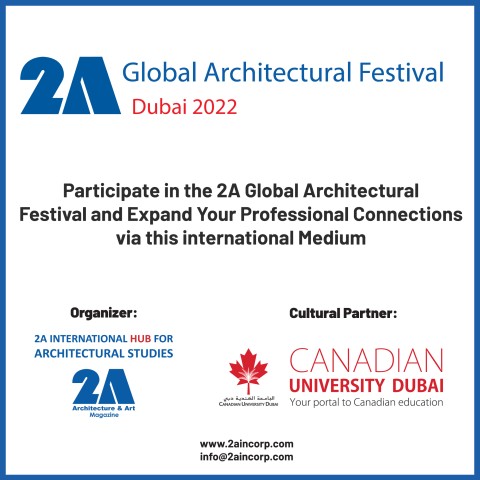 Since 2006, the 2A Magazine has created a choral relationship with it’s audience. Established by Ahmad Zohadi, the 2A magazine continually, through its multitud of activities, continues to be an international hub for architectural studies. Through its various activities, the 2A magazine has always tried to bring a positive change to humanity, improving their quality of lives. After being organised online for two years, because of the COVID pandemic, The 2A Global Architectural Festival is returning to the offline world. This year’s 2A Global Architectural Festival will be organized at the Canadian University, Dubai. It will have the following activities under one forum.

The 2A Continental Architectural Awards (2ACAA) is one of the most prestigious International Architectural Awards. For eight years, the award has been recognising the outstanding contributions made by individuals and firms to the field of architecture. From the challenges they have faced in the field and/or the region to the innovations they have come up with, the 2ACAA celebrates the journey that has imprinted them in the architectural world. It is an appreciation and recognition of architecture worldwide stemming from various cultural and traditional backdrops.

Architecture in different countries is inspired by their distinctive culture. That’s what makes the world of architecture very diverse. 2ACAA aims to celebrate this uniqueness and diversity at the same time, promoting an amalgamation of diversity together with professional discussions into remoulding the very face of the earth. The goal of 2ACAA is to prevent the extinction of cultural practices and techniques in different countries as well as conjugate them with modern ideas and methods to create masterpieces that are a statement of the tradition as well as the advancement of the nation. This is also in keeping with the global nature of the 2A magazine.

The theme of the 2022 2ACAA will be “Innovative Contextual Architecture in Continents”.

Both movies and architecture are in fact art-forms.

Movies and architecture have always had an intrinsic connection. Movies have been serving as a telescope of architecture across continents and been documenting their evolution. Architecture is not just the backdrop of the scenes in movies. Many a time, cinema tends to showcase cities in their architecture as a representation of their lifestyle.

On the flipside, a change in lifestyle, and living conditions of a city or country does have an impact on cinema too. The 2A City-Architecture Movie Awards (2ACAMA) celebrates this very relationship.

It will provide architectural philosophers and critics with a medium to contemplate the expression of architecture. It forces one to try and understand human and environmental needs while building living spaces. Also, it makes you recognise what kind of spaces are required in keeping with the mentality of the people and the cultural setting. 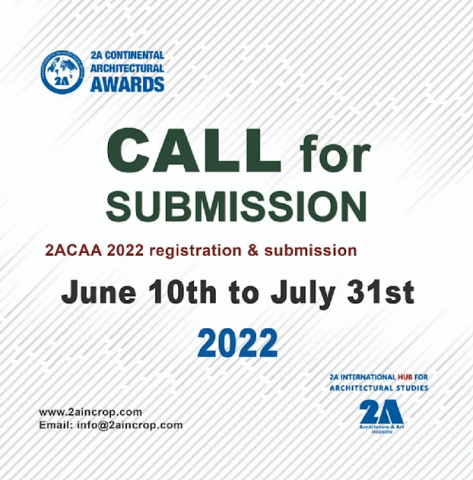 The theme of the eighth edition of 2ACAMAA is “Building a Creative Atmosphere” to promote expression of assorted cultures through content.

The festival will feature many international documentaries and films that show the reflective and thoughtful nature of the relationship between movies and architecture. Applications can be submitted in the form of 7-minute movies and as movies above seven minutes whose narrative utilises the socio-cultural as well as economic aspects of architecture. Documentaries about celebrated professionals of the architectural industry are also welcome. The other category will be movies that showcase the marketing of architecture and built projects. Projects in the form of animations, AR, VR and video games telling architectural stories are also welcome to compete for the award. Applicants can make more than one submission in each category. The submissions will be open from 15Th June through 15th August. The decision of the judges shall be final. The jury members include prominent figures such as Gul Kacmak Erk (Senior lecturer in Architecture, Queen’s University, Belfast), Pouran Derakjshandeh (Film director, producer, screen writer & researcher), Dr Toby Reed (PhD – Architecture and Design), Chang Huai-Yan (M.Arch, Director of Salad Dressing), Abbas Gharib (Founder of Studio Gharib),  and Elise Feirersinger (Architecture’s Executive Committee). 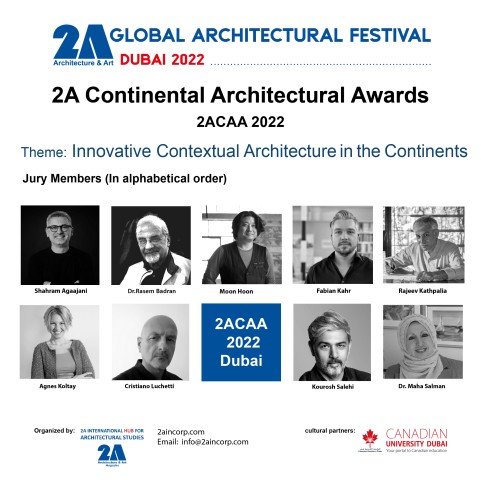 Since its inception, the 2A Global Architectural Festival has focussed on coalescence of ideas to invent new ones. Archtalk has always been a unified forum for cross-continental architectural networking. In keeping with this tradition, this year’s festival will continue to provide a platform for sharing ideas from different origins. Beginning in 2018, ArchTalk has served as a forum for International Interaction and exchange of practices and theories of various styles of architecture.

It sets the ground for the 2A Centre of Future Architectural Perspective (2ACAP).

2ACAP will drive the exchange of diverse cultural data that creates a substantial impression globally on the architectural industry. The possibilities that could arise in future are visualised and augmented at the formal forum called 2ACAP. As a part of this comprehensive activity, the 2A Veneration Innovative Achievement Memorial Icon is presented to Genuine Innovators, Architects, Artists, Social Strategists in Design and Execution, Developers & Builders.

With such award-winning, experienced and seasoned professionals present on the same premises, one can only imagine what kind of creative conversations that will be sparked. It sets a new dimension for multiculturalism, case studies, inspiration and, in turn, architectural innovation. ArchTalk serves to bring about perspective, to absorb the various methodologies, techniques and reflect upon the existing limitations, challenges and where we can go from here. Through several influential programs, intellectual discussions and lectures, ArchTalk strives to add to the rational impact of architecture.

Every city has its own different style of architecture inspired from its landscape, people’s attitudes and culture – and that is what makes it unique. As brilliant as it is in its own way, it may have certain limitations as well. And the very goal of 2A magazine initiating Paragon City is to upgrade the situation in participating cities. A paragon city can be of any scale – a whole city, a part of the city or just a neighbourhood. The goal is to achieve innovation, create smarter cities that have more ease and accessibility and are more inclusive and multicultural among other things and significantly “High Professional Standard and Performance” which reflects the Moyar’s abilities.

Moreover, a city that gets defined as a Paragon city gets announced globally, which boosts its branding and makes it easier to move towards development. Even still, the characteristics of prominent cities can be studied to arrive at conclusions about problems in smaller cities.

With this kind of upgradation, there can be predicted, in the long run, a competition amongst cities to become a Paragon City. Nonetheless, 2A will always aim for solving urban problems in the most cost-effective manner. A Paragon city will be the zenith of city’s recognition in terms of urban design, planning, municipalities, and urban management institutions, all of which will make the lives of its citizens more peaceful, less stressed and flourishing.