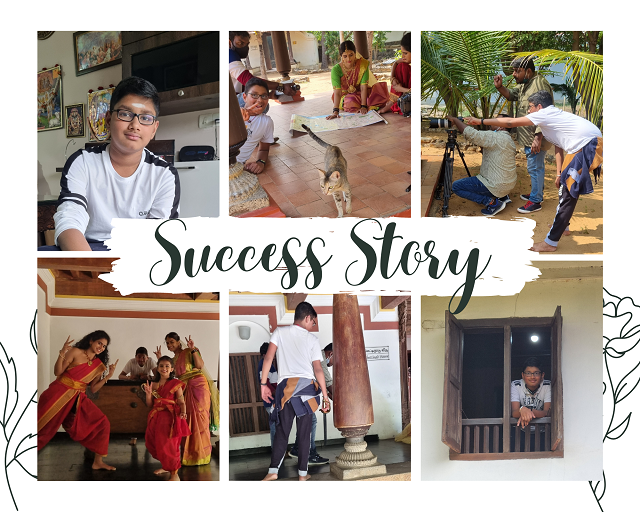 From History For Women Empowerment: It is all about inspirationCan characters from our history inspire us to accomplish great deeds? Do they give messages of great relevance to people of today? Yes, they do, says Dheepak Karthikeyan, a student of Grade 7 in Oakridge International School in Bengaluru.

Dheepak made a short film on the legendary woman warrior ‘Kuyili’ who was considered to be staunchly loyal to Rani Veeramangai Velu Nachiyar and is believed to have played a crucial role in the Queen’s victory on the British.

What is so special about this woman warrior? Her achievements, they are no less special, they can inspire the people of today, he says. She is an epitome of bravery, who stands to prove beyond doubt that women are capable of taking care of themselves and there is nothing that they can’t achieve.

Kuyili finds out that Silambam teacher of Rani Veeramagai was giving the information about her whereabouts to the British. The legendary queen was in hiding to escape confinement of the British, realising the dangers this could pose, Kuyili jumps into action and kills Silambam teacher to save the popular queen from further trouble: https://www.youtube.com/watch?v=cKa4UPNYmTY

British were planning to launch an attack on Rani Veeramangai, and, Kuyili ventures ahead to find out the strategical disadvantages of the British. She came to know where the English were storing their arms and ammunition.

She comes to know that destroying the arsenal of the British can deprive them of advantage over Rani Velu Nachiyar, sets herself ablaze and walks into the Armory and destroys only to help the queen win over the English army.

These were among her brave deeds of Kuyili which motivated me to come out with a short film on her, says the students of Grade 7.

‘In class we were studying about gender equality and how women should be treated the same way as men. Women need not depend on men for safety and that they can protect themselves. Simultaneously in language and literature we were researching about the unknown History of their birth states which introduced me to the Unknown warrior Kuyili. Her life and sacrifice amazed me. I started to feel why that bravery is not been taught to girls. Why they are taught to get scared of societies rather than fight against the evil. For Art exhibition we were suppose to come up with an art related to a theme “Create your own future” I decided to take a short film on how women should learn bravery from kuyili life and shape their future to stand for themselves.’

The student further says Kuyili was the woman who took the risk no matter what the consequences were and this has helped increase his confidence level.  ‘I was surprised to know that she was the first suicide bomber. She sacrificed her life for the queen and for her people.’

Did everything go smooth? There were some challenges he had to face during the film making process.  it took some time to make the making script and to find the perfect artists, it was also pretty hard finding the perfect area to shoot the movie since it involved a lot of historical backgrounds.

There was something that kept him moving ahead despite challenges and what was that?  My Parents – Karthikeyan V and Prethi G and My Uncle Nandakummar R and my Grandparents were the one who motivated me the most.

‘My Uncle Supported my ideas and said more than winning learning the art the right way is important, through my Mom I got introduced to Mr. Yatish sir (Director) who thought me everything and then with his guidance I was able to complete my short film successfully.’

He puts a point of relevance, a message that one cannot simply brush aside. ‘Kuyili bravely stood against the British’s army power without thinking about her life. If a woman can fight an army why can’t our girls fight a malevolent. It should start from home to be brave and fight for their rights and safety. This made me to associate the theme of the movie that has a concept from our rich past with women empowerment.’

Speaking about his future plans Dheepak says he has a passion for film making, but stresses the fact that future is always non-predictable. ‘I may I may try doing few short films with different theme during my school off.’