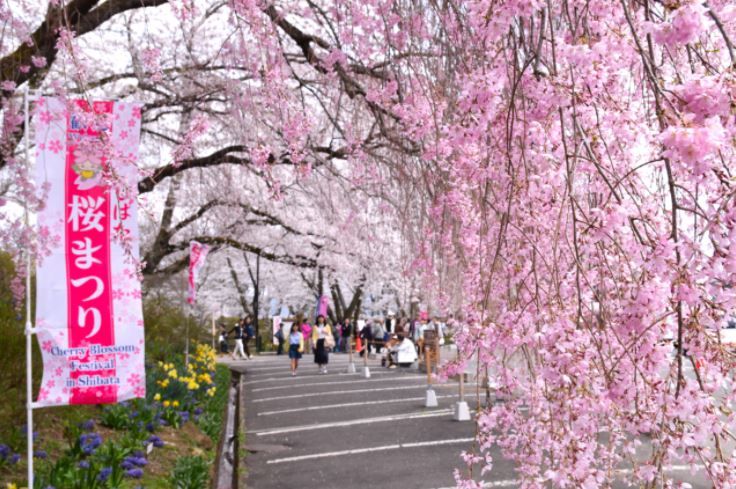 The peak of the cherry blossom season occurred on March 26, 2021, and is the earliest peak bloom date, surpassing a previous record holder of March 27, 1409, nearly a century before Christopher Columbus sailed to the New World, reports the Washington Post.

Scholars and scientists can be assured the earlier recorded date of the peak bloom is accurate because the records for Kyoto go back to 812 AD in imperial court documents and diaries.

Not only is the cherry blossom, “sakura” in Japanese, the national flower of Japan, but its appearance is also tremendously important, both economically and culturally. With their rich symbolism, cherry blossoms have been used often in Japanese art, manga, anime, and film. 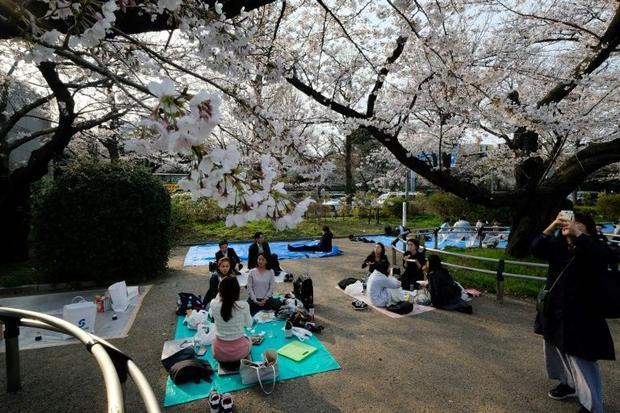 It is a Japanese tradition to eat and drink under the cherry trees
Kazuhiro NOGI, AFP/File
The flower is also represented on all manner of consumer goods in Japan, including kimonos, stationery, and dishware. Cherry blossoms are a prevalent symbol in Irezumi, the traditional art of Japanese tattoos. In tattoo art, cherry blossoms are often combined with other classic Japanese symbols like koi fish, dragons, or tigers.
Advertisement. Scroll to continue reading.

Early blooming due to climate change
“The Kyoto Cherry Blossom record is incredibly valuable for climate change research because of its length and the strong sensitivity of flowering to springtime temperatures (warmer springs = earlier flowering, typically),” Benjamin Cook, a research scientist at Columbia University who specializes in reconstructing climate data from the past, said in an email.

“In Kyoto, records of the timing of celebrations of cherry blossom festivals going back to the 9th Century reconstruct the past climate and demonstrate the local increase in temperature associated with global warming and urbanization,” according to an earlier paper published in the scientific journal Biological Conservation in 2009. 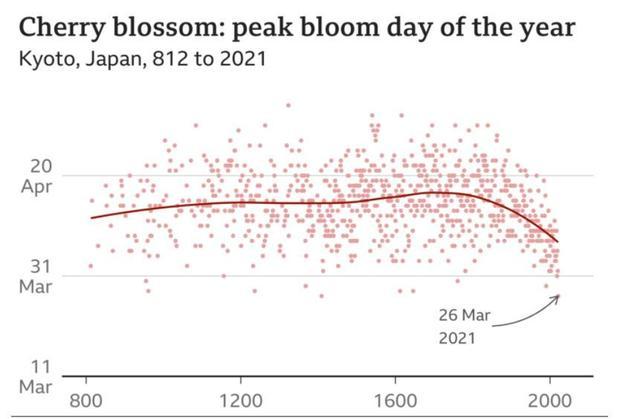 Historical Series of Phenological data for Cherry Tree Flowering at Kyoto City
(and March Mean Temperature Reconstructions)
Osaka Prefecture University
Yasuyuki Aono, a researcher at Osaka Prefecture University, has tracked the data back to 812. “I have searched and collected the phenological data for the full flowering date of cherry tree (Prunus jamasakura) from many diaries and chronicles written by emperors, aristocrats, governors, and monks at Kyoto in historical time,” he wrote.

Data suggests that since 1800, the peak blossoming date has been steadily moving back from mid-April to where it is today. This trend toward earlier blooming dates potentially makes the cherry blossoms more vulnerable to spring freezes, explained Theresa Crimmins, director of the USA National Phenology Network, which tracks the timing of the emergence of plant species. 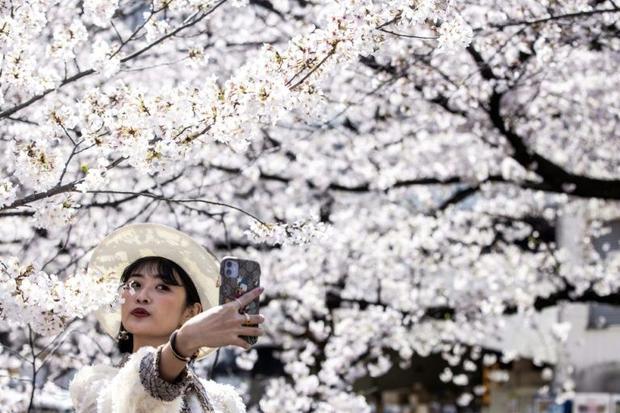 Many people decided to make the most of Friday's sunny weather and clear blue skies to snap 'sakura' selfies
Behrouz MEHRI, AFP
“For trees that flower, before they leaf out, like cherry trees, [a spring freeze], is especially damaging because they don’t generate another set of flower buds,” Crimmins wrote in an email. “If the flower buds are frost-damaged, that is it for their flowering – and fruiting – for the year. There have been recent massive impacts to fruit crops because of early blooming followed by subsequent freezing events.”

“Bees are a key pollinator for cherry trees, and if bees were not active at the time of the very early cherry flowering this past spring in Japan, the trees may have had poor pollination. In addition, those bees may be going hungry without the cherry flowers as a food resource when they do become active.”