This was the argument of Professor Andrew Gewirtz, from the Centre for Inflammation, Immunity and Infection, based at Georgia State University. Professor Gewirtz put forth this argument during a lecture delivered to the Parenteral Drug Association (PDA)’s 10th Global Pharmaceutical Microbiology Conference in Bethesda, U.S., on October 20.

Professor Gewirtz’s began his presentation with some facts about the human microbiome:

The human gut has 100 trillion bacteria;
50 percent of the weight of the gut is made up with bacteria, constituting up to 2 kilos;
The bacterial population is diverse, made-up of pathogens; those that are sometimes beneficial; and those that a neutral (termed comensurables.) Each of the three sets can ‘change’ into the other, depending on circumstances. 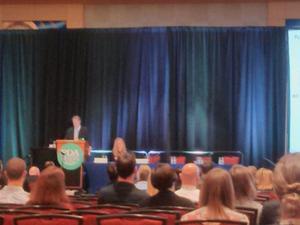 What is interesting about the microbiome (the totality of the microorganisms within a distinct region), Professor Gewirtz explained is that it is heavily shaped by infancy. Babies, he explained, are born “near sterile” (sic) with most of the bacterial population added to in the early months of life.

The composition of the bacteria in the gut is essential for health; for example, metabolizing carbohydrates that we cannot digest ourselves. Conversely, the bacterial composition can be responsible for some ill-health effects. Most of these health issues are types of auto-immune diseases, such as inflammatory bowel disease or Crohn’s disease.

Professor Gewirtz next outlined a range of studies that show how different diseases relate to the presence of different microbial diseases, and that this is borne out by various mouse studies. Indeed it is possible to breed mice with no gut bacteria and then to added different combinations to see what happens, normalizing diet and environment, and even using mice from the same litter. Here it is possible to create obese mice simply by altering the bacterial composition (via fecal transplants.) Researchers are using such mice with developed adipose tissue for research into type II diabetes.

These latter studies point to an inflammatory reason for insulin resistance and this, in turn, can trigger type II diabetes developing. This missing link is why? Moreover, researchers are looking into such effects arise from bacterial composition alone, or whether food also plays a part.

So why weight can be altered by changing gut bacterial profiles, researchers are keen to see if the features of a disease can be transferred. This is what Professor Gewirtz refers to as “metabolic inducing microbiota.” It is clear that “some microbiota are inherently more inflammatory.” These are bacteria that posses flagella (as in the picture below, having whip-like structures that allow a bacterial cell to move) and have certain types of cell walls (veering towards having specific toxins called endotoxins.) These type of bacteria are most likely to trigger cytokine reactions, as part of the immune response. 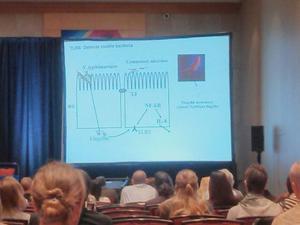 Professor Andrew Gewirtz displays some of his work to the PDA microbiology conference, October 2015.
Tim Sandle

Another factor, which will eventually link back to food, is the location of such bacteria in the epithelial lining of the gut. Examinations of people with conditions like diabetes suggests that bacteria are located closer to the gut.

So what causes this? Professor Gewirtz listed out:

It is with dietary factors that a relatively new area of research has been focusing upon, looking at amounts of fat, fiber, protein, and carbohydrate consumed.

One troubling set of findings centers on food emulsifiers. These detergent-like molecules are added to processed food in order to thicken, improve the texture, or homogenize the food stuff. An example is polysorbate-80. Such an emulsifier is added to peanut butter, for example.

Sometimes food emulsifiers constitute 2 percent of the processed food, by weight. The recent research shows that food emulsifiers promote “bacterial translocation”, that is the position of bacteria in the gut wall lining, driving them closer to the gut. As explained above, the closer bacteria are to this area then the greater the chance of inflammatory bowel disease and thus of a person developing a disease like diabetes.

This has been borne out in mouse studies, Professor Gewirtz noted, using emulsifier rich food like ice cream with water based foods. The results are sufficient to at least be cautious that it is the spread of processed foods in modern society – rather than simply the fat or sugar content – that is responsible for the rise in inflammatory diseases.

While more work is to be done, Professor Gewirtz has set out a fascinating new research strand.