Areas that have been hit the hardest in the country have declared a state of emergency, Quartz reports.

Children who are born with microcephaly often die young. For those who do survive, there’s a lifetime of problems with cognitive impairment. In order to get a handle on the sudden rise of this disorder, the Brazil’s health ministry linked it to an epidemic of Zika virus that began in early 2015.

Transmitted by mosquitoes, the virus was first detected in Uganda in the 1940s. It made its way through Africa and parts of Asia, and now it’s spread to Latin America. There’s no vaccine to prevent the virus and there’s no medicine that can treat it, either.

What is Zika virus?

The virus is a member of the Flaviviridae family and it’s related to other pathogenic vector born flaviviruses including dengue, West-Nile virus and Japanese encephalitis viruses, the European Centre for Prevention and Disease Control reports. Zika virus is an emerging infectious disease that has the potential to spread to new areas where the Aedes aegypti mosquito (a vector for the disease) is present. The Centre reports that there isn’t any evidence that the virus has made it’s way to Europe as yet, and imported cases are rare. 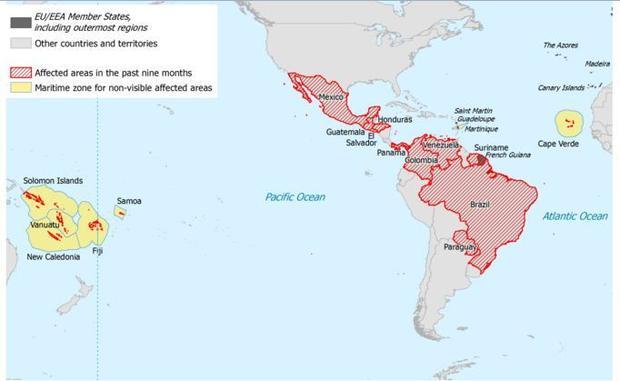 Latin American countries where the Zika virus has been reported.
European Centre for Disease Prevention and Control

But this is little comfort for families whose infants have been affected by the virus that’s also steamrolling through Colombia, El Salvador, Guatemala, Mexico, Paraguay, Panama, Suriname, Venezuela, and Puerto Rico, which just reported its first case, The Independent reports. Since October, the virus has been detected in all of these countries.

“I cried for a month when I learned how God is testing us,” Gleyse Kelly da Silva, 27, told The New York Times. An ultrasound uncovered microcephaly while da Silva was seven months pregnant with her daughter, Maria Giovanna, born in October.

A few months prior, da Silva went to the doctor after experiencing some of the Zika virus symptoms: fever, a red rash, and joint pain.

“I had never heard of Zika or microcephaly,” she said. “Now I just pray that my daughter can endure life with this misfortune.”

Aside from having abnormally small brains, infants born with this condition suffer serious neurodevelopment issues that either require life-long care or result in an early death.

Pregnant women across Brazil are understandably panicked. The government has faced stiff criticism for not acting sooner and is now urging women to take every precaution to avoid mosquito bites, the Times reports. Women who live in areas where mosquitoes are prevalent should postpone having children, one official said.

“If she can wait, then she should,” said Claudio Maierovitch, the director of the department of surveillance of communicable diseases at the Health Ministry in Brazil. 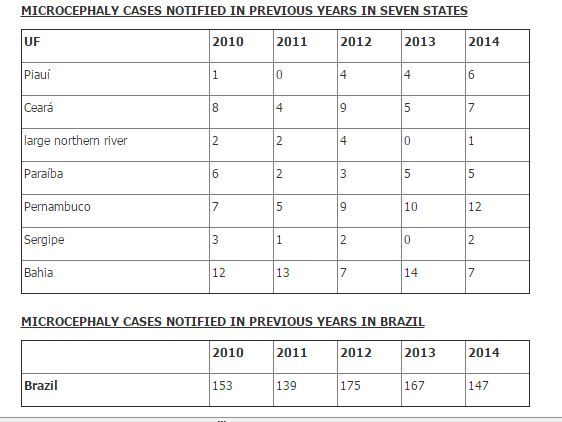 Brazilian officials have registered at least 2,782 microcephaly cases this year, compared to just 147 in 2014 and 167 in 2013. Researchers say at least 40 of the babies have recently died, and there are concerns that cases could multiply in the coming months. Infants who do survive may face lifelong impaired intellectual development.

Researchers in Brazil say that the Zika virus is to blame for the sudden increase in brain damage in infants.

However, some virologists urge caution and say that more testing is necessary to prove the dangerous link between the virus and brain damage. So this makes the full extent of the threat to the country, and the hemisphere unclear.

“Why this may have happened in Brazil and not elsewhere is at this stage difficult to answer,” Alain Kohn, a virologist at the University of Glasgow told The New York Times. Kohn studies Zika. “Perhaps it was never properly registered in other areas, or the situation in Brazil is indeed different.” There is, he said, a possibility that the link between Zika and microcephaly may be related to certain virus strains.

Microcephaly at a glance

It’s a condition in which the circumference of the head is smaller than normal because the brain either hasn’t developed properly or has quit growing, according to the National Institute of Neurological Disorders and Stroke (NINDS). While it can be present at birth, it sometimes develops in the first few years of life. Genetic abnormalities that interfere with the cerebral cortex in the early months of a fetus’s development are the most common cause of microcephaly. It may be associated with Down syndrome, chromosomal- and neurometabolic syndromes.

Babies can also be born with microcephaly if their mothers abused drugs or alcohol, or contracted German measles or chicken pox while pregnant.

Depending upon the severity of the condition, children with microcephaly can suffer impaired cognitive development, delayed motor functions and speech, dwarfism or small stature, hyperactivity, seizures, facial distortions, difficulties with coordination and balance and other brain or neurological problems. Some kids with microcephaly will have normal intelligence and a head that will grow, but it will still be below the normal growth curves for head circumference, the NINDS reports.

While Brazilian doctors did find the virus in the placenta of children born with microcephaly, that wasn’t the case when a major outbreak occurred on the Yap Islands in Micronesia, Quartz reports. Of some 12,000 people living on the island, 75 percent were affected by the virus.

These two epidemics didn’t cause a spike in microcephaly.

A possible explanation for the link might be that a new strain of the virus is spreading across Brazil, Kohl said. However, Quartz notes, even for the planet’s quickest evolving organism, acquiring a set of brand-new powers of devastation is pretty unusual.

A likelier explanation? The link between virus and disorder has simply gone unnoticed. Perhaps microcephaly induced by the Zika virus only occurs in a small portion of pregnant women, and none of the earlier epidemics were sufficiently large enough to raise an alarm.

To make matters worse, Brazil has suffered a nasty dengue epidemic, caused by the same mosquito, A. aegypti. In 2015, 1.6 million cases of dengue were reported. almost three times as many as were reported in 2014.

“Brazil offers the ideal conditions for Zika to spread so quickly,” said Ana Maria Bispo de Filippis, the leader of the research team that linked Zika and microcephaly told the New York Times. The population is susceptible because most of the people have never been in contact with the disease.

The country’s embattled political situation is another problem. President Dilma Rousseff is fighting impeachment proceedings and she has been criticized for taking a weak stance regarding the Zika epidemic. Even worse, the rainy season begins in January and continues through May and mosquito-borne diseases always tends to spike during this period.

It’s worth noting that Zika has also been found in the U.S., brought back by travelers who have visited affected regions, but as yet, there have been no locally transmitted cases there. The Centers for Disease Control and Prevention expects these cases to increase, the Times reports.

The CDC advises the following precautions to avoid mosquito bites in the affected countries: Use insect-repellent creams, wear long sleeves and long pants. If possible, sleep in air-conditioned rooms or behind screened-in windows.