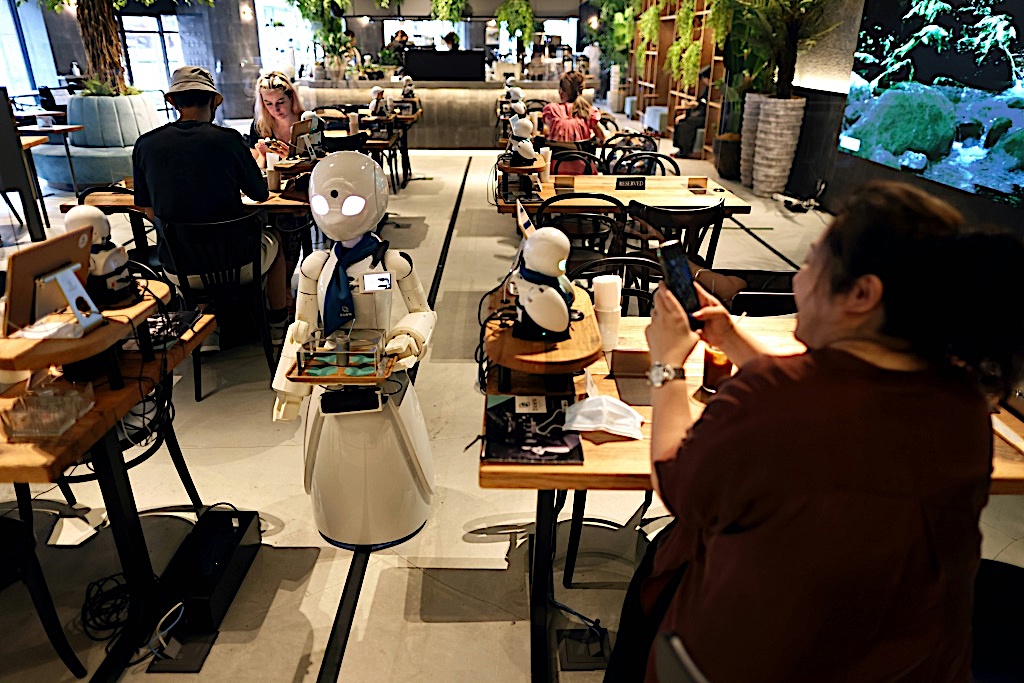 At a Tokyo cafe, Michio Imai greets a customer, but not in person. He’s hundreds of kilometres away, operating a robot waiter as part of an experiment in inclusive employment.

Dawn cafe’s robots are intended to be more than a gimmick, offering job opportunities to people who find it hard to work outside the home.

“Hello. How are you?” a sleek white robot shaped like a baby penguin calls from a counter near the entrance, turning its face to customers and waving its flippers.

Imai is behind the controls at his home in Hiroshima, 800 kilometres (500 miles) away, one of around 50 employees with physical and mental disabilities who work as Dawn’s “pilots”, operating robot staff. 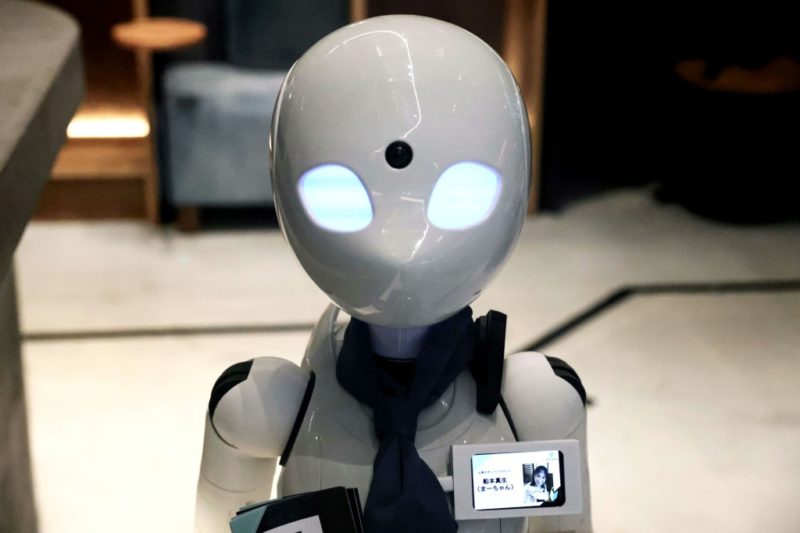 Dawn cafe’s robots offer job opportunities to people who find it hard to work outside the home. — © AFP

The cafe opened in central Tokyo’s Nihonbashi district in June and employs staff across Japan and overseas, as well as some who work on site.

It was originally supposed to open last year to coincide with the Paralympics, but the opening was postponed by the pandemic — just like the Games, which begin on Tuesday.

Around 20 miniature robots with almond-shaped eyes sit on tables and in other parts of the cafe, which has no stairs and smooth wooden floors large enough for wheelchairs.

The machines named OriHime feature cameras, a microphone and a speaker to allow operators to communicate with customers remotely.

“May I take your order?” one asks, next to a tablet showing a menu of burgers, curry and salad. 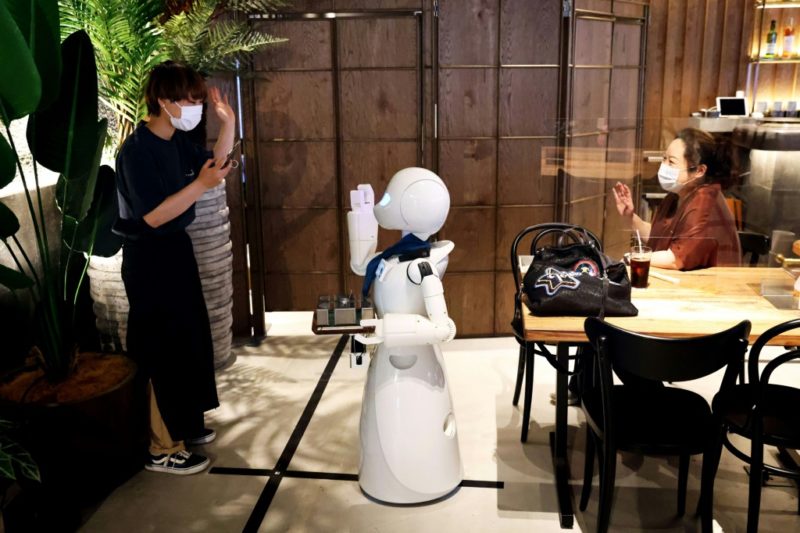 The cafe’s robots are largely a medium through which workers can communicate with customers. — © AFP

As customers chat with the pilots operating the mini robots, three larger, humanoid versions move around to serve drinks or welcome customers at the entrance.

And there’s even a barista robot in a brown apron at the bar that can make coffee with a French press.

But the robots are largely a medium through which workers can communicate with customers.

“I talk to our customers about many subjects, including the weather, my hometown and my health condition,” said Imai, who has a somatic symptom disorder that makes leaving home difficult.

“As long as I’m alive, I want to give something back to the community by working. I feel happy if I can be a part of society.” 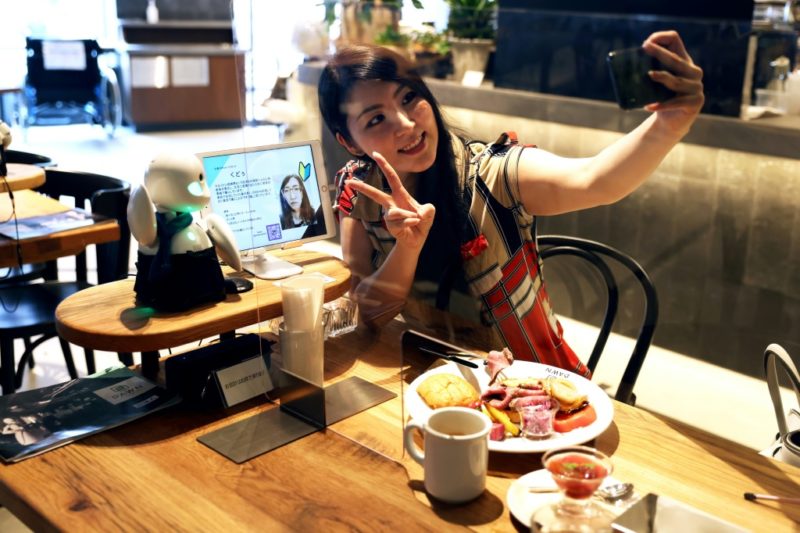 Since Tokyo won the bid to host the Paralympics, it has touted efforts to make public facilities more accessible. — © AFP

Other operators have a range of different abilities, including some Amyotrophic Lateral Sclerosis (ALS) patients who use eye movements on a special digital panel to send signals to the robots.

The project is the brainchild of Kentaro Yoshifuji, an entrepreneur who co-founded the company Ory Laboratory that makes the robots.

After suffering a bout of bad health as a child that left him unable to go school, he began thinking about ways to bring people into the workforce even if they can’t leave home.

“I’m thinking about how people can have job options when they want to work,” said the 33-year-old.

“This is a place where people can participate in society.”

He established the cafe with support from major companies and crowd-funding, and says the experiment is about more than robots.

“Customers here are not exactly coming to this location just to meet OriHime,” he told AFP at the cafe.

“There are people operating OriHime behind the scenes, and customers will come back to see them again.”

– Work to do on inclusion –

The cafe’s launch comes with the Paralympics due to open on August 24 and disability advocates debating Japan’s progress on inclusion and accessibility.

Since Tokyo won the bid to host the Games in 2013 it has touted efforts to make public facilities more accessible.

But support for inclusion remains limited, said Seiji Watanabe, head of a non-profit organisation in central Japan’s Aichi that supports employment for people with disabilities.

In March, the government revised regulations to edge up the minimum ratio of disabled workers at a company from 2.2 percent to 2.3 percent.

“The level is too low,” Watanabe told AFP. “And Japanese companies don’t have a culture of hiring diverse human resources on their own initiative.”

At Dawn, Mamoru Fukaya said he and his 17-year-old son were enjoying the cafe on a lunchtime visit.

“(The pilot) was very friendly,” the 59-year-old said. “Since he said he can’t work outside his home, it’s great that there’s this kind of chance.”

Yoshifuji is focused on the cafe project now, but thinks robots could one day even make the Paralympics more inclusive.

“There’s a possibility that a kind of new Paralympics for those who are bedridden can be created,” he said.

“We could even create new sports. That might be interesting.”