Sorghum has a lot to offer, and people have recently started paying attention to this grain’s usefulness. Sorghum has been used in the United States for fodder and in birdseed mixes. It is also used in the manufacture of biofuels, foods such as gluten-free baking flours, and industrial products including packing peanuts and insulation, to name but a few.

Sorghum and other cereal crops, such as maize (corn), wheat, rice, barley, and millet, are members of the Poaceae family of plants, These domesticated members of the Poaceae family constitute the most economically important crops in the world today. Sorghum is native to Australia, with some species found in Africa, Asia, Mesoamerica, and even a few islands in the Indian and Pacific Oceans.

While there are a lot of species of sorghum, including one known as Johnson grass (S. halapense), an invasive species in the U.S. that has been known to kill livestock, the one of particular interest to farmers and scientists today is Sorghum bicolor. This species is native to Africa and is an important subsistence crop for many of the Sub-Saharan people who are food-insecure. Traditional and modern African food recipes use sorghum as an ingredient in breads and couscous, as well as mass-produced hot cereals. Sorghum is also used to make a traditional African beer. 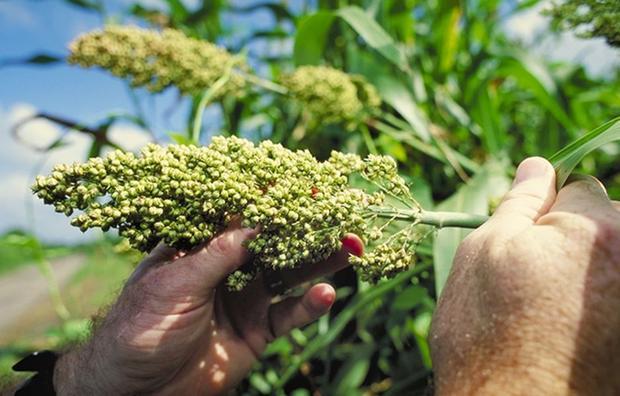 Gluten-free and climate-friendly grain
Annually in the U.S., farmers plant close to 80 million acres of corn. It is a resource-intensive crop. Farmers need to add nitrogen to the soil in the form of synthetic fertilizers, and corn needs a lot of water. To get 200 bushels of corn from just one acre of land requires 160 pounds of nitrogen and 600,000 gallons of water.

The run-off and buildup of chemicals in waterways and aquifers resulting from the use of synthetic fertilizers is but one of the negatives associated with corn production. Another important consideration is climate. In 2012, when the Midwest experienced a drought that lasted for months on end, corn and soybeans didn’t make it through the growing season. The only crop that survived was sorghum.

Sorghum seeds are cheaper than corn, and the crop requires only two-thirds the water per acre that corn needs, and requires less nitrogen. And if it doesn’t rain at all for several months, the crop will do just fine. Sorghum is also resistant to mycotoxins and fungi. Despite these attributes, sorghum usually produces less bushels per acre than corn, and in non-drought years, makes it less economical. But with the change in weather patterns, there is a distinct advantage to planting sorghum.

Although sorghum is used primarily for fodder and ethanol production here in the U.S., American food manufacturers are taking another look at sorghum. The grain is gluten-free, a marketable trait more families are seeking. In the past few years, sorghum has been showing up in alcoholic beverages, grain mixes, and as a substitute for popcorn. And sweet sorghum, once a staple in the Appalachian region of the country, is making a comeback. The syrup tastes like a mixture of molasses and maple syrup. 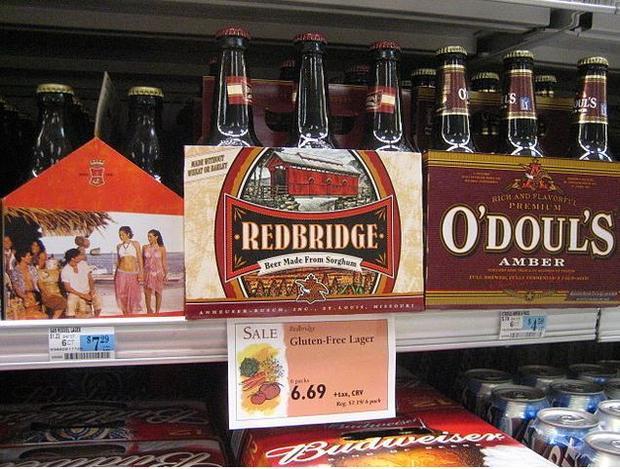 Gluten free beer made from sorghum in an American supermarket, just one of the many products made from this remarkable grain.
flickr

The nutritional value of gluten-free sorghum
Sorghum is usually eaten with the hull, the outer shell of the grain which contains most of the nutrients. It is naturally high in iron and fiber, as well as being high in protein. The grain is also rich in antioxidants and policosanols that may impact cardiac health. Being gluten-free, sorghum also has many micro-nutrients that bring many health benefits.

But undoubtedly, the use of sorghum in our diets is going to increase as the world begins to adjust to our changing climate conditions. Sorghum is critical to diet diversity because fewer and fewer crops are feeding the world’s population than there was 50 years ago. And with its multiple uses, not only as a food crop, but in the production of biofuels and other consumer products, sorghum will continue to be an important part of our future.