Through the marvelous access of Wikipedia in our digital age, this reporter was able to find a few answers in minutes while watching the film. As I scrolled through the basic outline of info provided at Wikipedia, I was disappointed to read that the creator of the Bond series, Ian Fleming, had little to say—only that “I wanted Bond to be an extremely dull, uninteresting man to whom things happened. I wanted him to be a blunt instrument.”

An unsatisfactory answer for me, especially when the James Bond ‘007’ character has been portrayed by an array of actors who are anything but dull and uninteresting.

Yet, perhaps as providence or serendipity would have it, a few days later on a trip to the local library—there was information waiting. As I walked in the door, the answer was waiting on the New Books shelf. It was in the form of an exciting booked called “Into The Lion’s Mouth — The True Story of Dusko Popov: World War II Spy, Patriot, and the Real-Life Inspiration for James Bond,” by Larry Loftis. USA Today gives it a high star rating and praised it for being well researched.

Even more fortunately, I was able to reach Loftis. We talked by phone from his home in Florida. While doing research for an espionage novel, Loftis began to search what real spies had done, and who was the best. “All roads led to Popov,” he said, “a WWII British double agent.” In short order, Loftis changed his search to focus on this iconic figure and soon discovered that this MI6 agent was the real-life inspiration for James Bond. The man turned out to be all the things we imagine a Bond to be, and more.”

The principal reason why very few know that Popov was Ian Fleming’s Bond inspiration, Loftis noted, is because of Britain’s Official Secrets Act. The Act, which gagged Fleming his entire life, prevented any British intelligence personnel from breathing a word of their activities during the war; to do so would have brought immediate fine and likely imprisonment. As such, Loftis added, when Fleming was asked about his model for Bond he’d say he drew upon multiple people he came across during the war, or redirect the question to how he came up with the James Bond name (his favorite ornithologist). 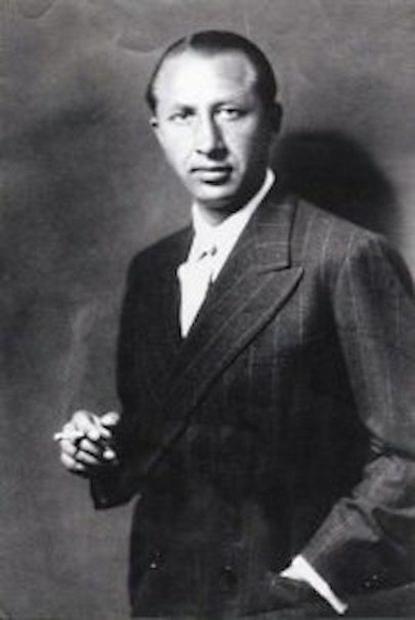 While real-life spy work is dangerous and often less than glamorous, double-agent, Dusko Popov was very much the playboy, bon vivant. While never referred to as “007” with a license to kill. Author/biographer Larry Loftis said he could have “ice-in-his-veins’ determination in carrying out even the most Machiavellian of plans.
Courtesy of Larry Loftis and Berkley Caliber, NY

Fleming died in 1964, taking his secrets to the grave. In the 1970s, several former British intelligence officers began to release memoirs as the Official Secrets Act began to soften, but typically either changing names or using code names. After Popov died in 1981, Loftis explained, the UK and US began to declassify files. The problem for researchers, of course, was that there were thousands of MI5 and FBI to review.

Loftis spent two years doing just that, combing through thousands of MI5, British Naval Intelligence, and FBI files. The FBI’s WWII files, which are housed in National Archives II in College Park, Maryland, include eight boxes of information on Popov.
Into the Lion’s Mouth has received glowing endorsements from two four-star admirals (James Lyons and R. J. Zlatoper) and a former CIA Director (Michael Morell), none of whom were aware of Popov, Loftis said, or that he had warned the FBI in August 1941 that the Japanese were planning a surprise attack on Pearl Harbor. The reason, Loftis explained, was easy to see in hindsight—J. Edgar Hoover kept the FBI records classified until his death, and Britain’s Official Secrets Act kept MI5’s files classified.

Loftis’ book includes documentation showing that Fleming got his inspiration for the Bond character while shadowing Popov in 1941 in Lisbon, then a hot spot for spies and espionage activities. In particular, Loftis describes an encounter between Fleming and Popov in Casino Estoril, which Fleming used to create James Bond and Casino Royale, Ian’s first novel. In the casino scene made famous by Daniel Craig in the 2006 movie version, Loftis explains in his book, Bond is essentially playing Popov, Mathis is Fleming, and LeChiffre is a man from Liechtenstein named Bloch. 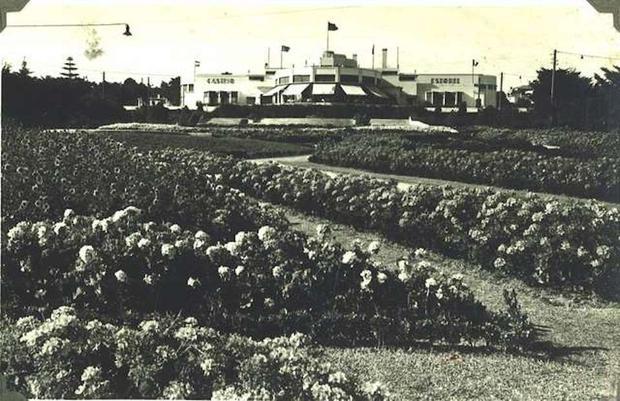 Casino Estoril, in Portugal not far from Lisbon is the place where Ian Fleming encountered Dusko Popov and used that chance encounter/impression as the basis for the James Bond character in his novels.
Courtesy of Larry Loftis and Berkley Caliber, NY

Casino Estoril still exists, and Loftis will be conducting media interviews there—as well as in the hotel where Fleming and Popov stayed (Estoril Palacio)—February 14-17.
While espionage has always fascinated audiences and the Bond movies based on Fleming’s novels have tremendous appeal, the work Popov did in real life was exceedingly dangerous. The title of Loftis’ book—Into the Lion’s Mouth, the author explained, came from a quote by one of Popov’s intelligence colleagues—Lt. Commander Ewen Montagu. After the FBI had blown Popov’s cover in 1942, Loftis noted, British Intelligence warned Popov not to return to his Abwehr masters in Lisbon. Popov went anyway, knowing that torture and death were likely. Popov was threw himself “into the lion’s mouth,” Montagu would say years later. 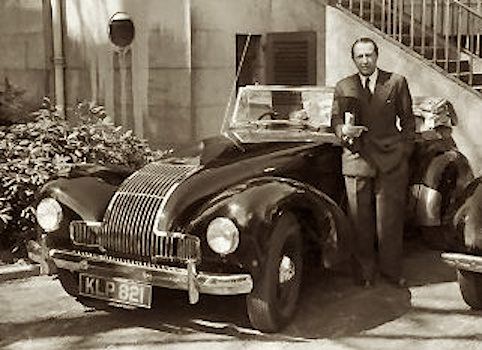 Dusko Popov the playboy. Born to a wealthy and prominent family, he was accustomed to living well and cultivated an impressive lifestyle that drew people to him, especially the ladies.
Courtesy of Larry Loftis and Berkley Caliber, NY

Popov survived the war, notwithstanding an attempt on his life, and was awarded and OBE—Officer of the Most Excellent Order of the British Empire—and given citizenship for his bravery and efforts on behalf of the Allies. In MI5’s application for the award, they noted that when Popov joined them, his home country of Yugoslavia was neutral. The triggering event, for Popov, Loftis surmised, was his first-hand experience with the Nazi party and the Gestapo while he attended graduate school at Freiburg University in 1936-37. Hitler was psychopath, Popov realized, and had to be stopped.

When looking back upon World War II, historians mostly cite the monumental battles, such as Normandy, Iwo Jima, etc. Yet as Adamya Sharma from the University of Colorado at Boulder pointed out in a thesis from 2015, “it is imperative to note that Allied and Axis intelligence units battled for supremacy in a war of deception. The Double Cross system employed by the British military intelligence division (MI-5) was, virtually from the war’s onset, successful in overwhelming its German opponent, the Abwehr by turning its agents into supportive double agents.”

Sharma’s aim of the thesis was to show that “the success of the ‘Double Cross’ system (of espionage) should be attributed to more than solely the actions of the Double Cross team. Though the operatives (like Popov) played an invaluable role, the existence of an overriding, well-structured system determined their success.” According to Sharma, the “victorious outcome of the British (and their allies) in the intelligence war was due to their tireless effort to perfect a system of counterespionage.”
But for those who want to see how that counterespionage system worked—by an agent who inspired James Bond and warned of Pearl Harbor, no less—Into the Lion’s Mouth is the resource. 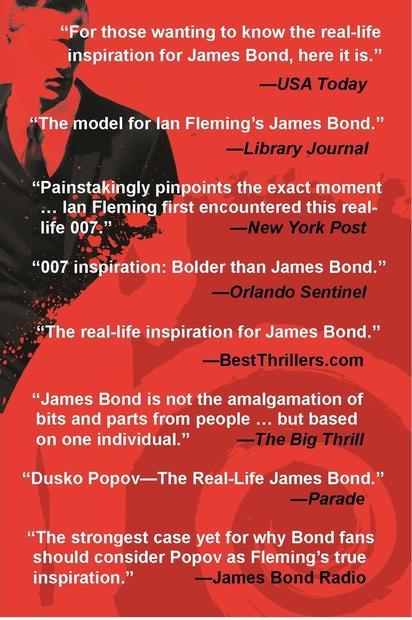 Thriller writer Steve Berry praises Loftis’ book, stating, “who needs fiction! Truth is a thousand times better, and this true-life adventure has it all.” Admiral Zlatoper, who had not seen Berry’s comment, rendered a similar conclusion: “Sometimes truth is not only stranger than fiction, but more exciting than fiction.”
While critics will continue to debate which actor is or was the best James Bond incarnation, Loftis’ research finally puts to rest the mystery of who inspired Fleming’s iconic character.
To learn more about “Into The Lion’s Mouth — The True Story of Dusko Popov: World War II Spy, Patriot, and The Real-Life Inspiration for James Bond,” visit Larry Loftis’ web site.