A collection of his most recent watercolor renderings is featured at the Sonoma Community Center and an opening reception was held there this past Oct. 7.
He shares the gallery space with ceramic artist Chic Lotz, the pottery designs compliment Cole’s compositions. Mostly landscape and pastoral scenes Cole’s work reflects his illustrator background. Some of the attendees to the reception that Friday evening commented on how “life-like” his paintings were. “At a distance they almost seem like a photograph,” one visitor said.

“I always love his pictures,” said Ellen Shepherd. She was among the first to arrive just as the reception started at 5 PM. The detailed use of a carefully selected color palate and the well-crafted angles of light and shadow, pulled people in to take a closer look. 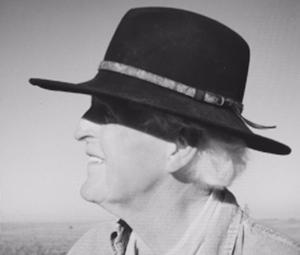 Illustrator, artist, poet, musician and fly-fisherman, to many Dick Cole is truly a ‘Renaissance man,’
Courtesy of Knowlton Gallery

“He is a realist and a representational painter,” said Manette Fairmont. She owns and operates Fairmont Gallery on the plaza in town. “I respect his work very much,” she said. The Fairmont Gallery has featured Cole’s work. “I represented him for about eight years,” said Manette as she is an artist herself. And, she has served on some of the same panels and committees for art competitions as Cole has over the years. Both have had the honor of “Master Watercolor painter.”
Watercolor is a specific type of painting that is not easy. Annual competitions across the State and throughout the U.S. are very strict as local artist Larry Murphy knows all too well. The California Watercolors Association has very tight rules about what it expects from artists who enter in the competition. About only 10 percent of the more than 800 entries are selected. 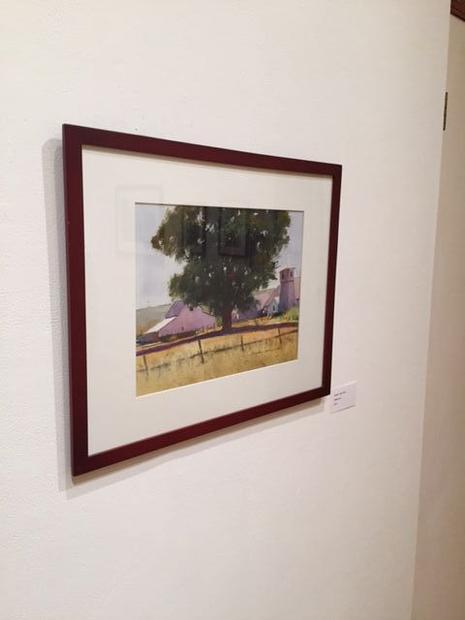 Most of artist Dick Cole’s paintings are of landscapes. Of the more than a dozen on display that evening, rural life was the subject.
Jonathan Farrell

Manette noted Cole’s work as an illustrator in the advertising sector, “he mastered architectural illustration.” “It is his abstract elements, a very choice – disciplined color palate that underlies the work. Dick has an eye for geometry and makes exceptional use of shadow,” she said.
This might be why most of Cole’s paintings are of landscapes, rural spaces. For as he told Southwest Art artists and art collector’s network back in 2012, “I like interior spaces: dark, largely unoccupied, punctured by a single light source, empty of human presence but always suggesting the aura of someone having just left the scene or not yet having arrived. I have always painted on the ‘dark side,’ my darkest colors painted first.”
This does not surprise Manette Fairmont or any of her colleagues as she said, “Dick uses a limited palate and is what I would describe as a ‘tonal painter.’ The striking aspects in his work is very hard to do,” she added. Mentioning that Cole does do ‘Plein air’ painting on location, “his ability to do renderings as a draftsman is amazing,” she said. 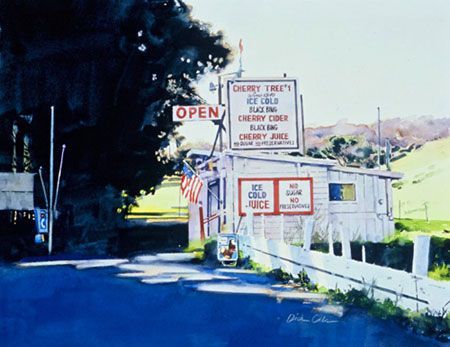 The Cherry Juice stand is a familiar site along the highway to Sonoma. In this rendering artist Dick Cole depicts it as it was in its heyday. Now, the stand is no longer in use and just sits abandoned.
Dick Cole, courtesy of California Watercolor Association

“I know Dick Cole and admire him, said Murphy, “He is simply the best.” Like Fairmont, Shepherd and others, Murphy mentioned that Cole was a man of many talents and abilities.
Shepherd knows him not only as a painter but as a writer. Each month they meet as part of a writers group, called ‘The Write Stuff,’ “It is a group we have been attending for over 20 years,” she said. It was founded by former San Francisco Chronicle editor William Chapin. She spoke fondly of the late Chapin who after retiring to Sonoma and had started the group, He died in 2003. “Bill and Dick could go on for hours, she said. Their wit and sharp insights were formidable and made the group very interesting.”

Despite the loss of its founder, the writer’s group is still going strong. June England who attends regularly enjoys reading Cole’s work and listening to the way he reads each verse and sentence. His distinctive voice is easy-on-the ears. Cole is a natural for voice-over work.
“Dick’s prose and verse are much like his painting, well constructed with a thoughtful use of words,” she said. 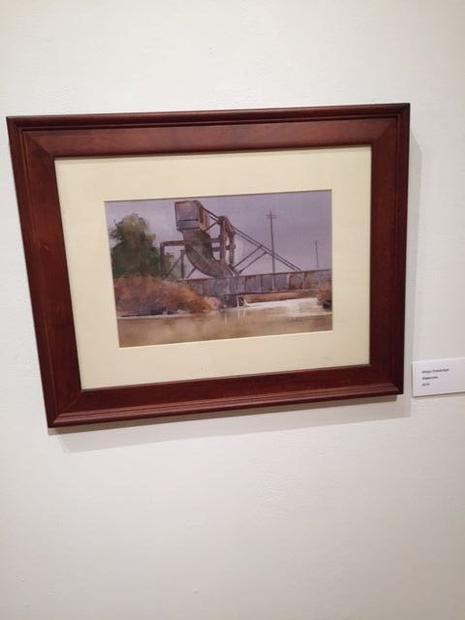 Like the cherry juice stand, artist Dick Cole captures remnants of a rural life that is disappearing. Here is an old facility that is no more.
Jonathan Farrell

While the group has a rule of not more than two pieces to read, Each literary piece Cole presents to the group is crafted as if sentences are painted lines and the emotions the words convey are a palate. Some of his writing is satirical and other pieces are reflective of events, like his prose about a performance he saw of musician Charlie Parker. “I saw him in one of his last performances just before he died,” said Cole.

Which leads into another important aspect of Cole. His life spans the important decades of change and transformation of contemporary America. He is of the post-WWII generation. While coming of age in the 1950’s and the decades that followed, he witnessed tremendous social, cultural and political changes. 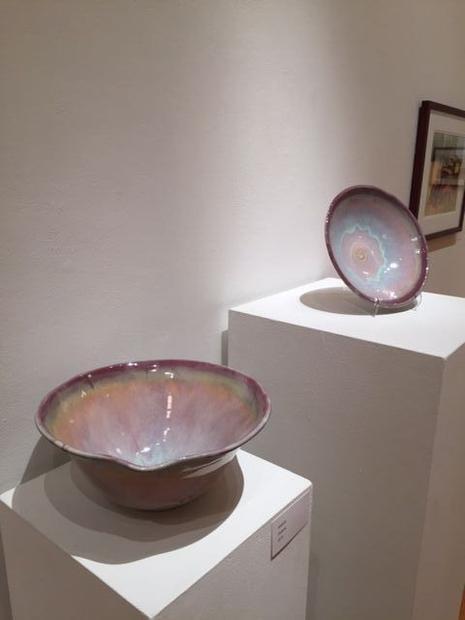 Established potter, artist and teacher, Chic Lotz shares the gallery with Dick Cole. Like Cole she also teaches and gives workshops at the Sonoma Community Center in town.
Jonathan Farrell

“Artists are also impacted by tragedy,” said Manette. “I know that when his wife Diane died three years ago, he did not paint as much. That is when he left our gallery.” Even if he put down his paintbrushes to mourn, Cole’s interest and zest for life would soon have him back out in the world.
His writing reflects that. Deep ponderings, expressed by someone who has seen and experienced much in his 80-plus years.
A graduate of UCLA and The Art Center College of Design, he has worked as a graphic designer, art director, and illustrator in New York, Palo Alto, and San Francisco. He has taught painting and illustration at the Academy of Art University, San Jose State University and Foothill College, and in addition to serving as a panel judge for the California Watercolors Association, He is an Artist Member of the California Art Club. He continues to keep a busy schedule with conduction workshops and teaching.

Fairmont, Murphy, Shepherd, England and others could explain in detail the various accomplishments and skills Cole possesses. Yet they all point out that Cole is someone they enjoy visiting and working with. He is cherished as a person, a friend. The accounts of life lived he often shares in chats with the writer’s group make for a great screenplay if not a novel. 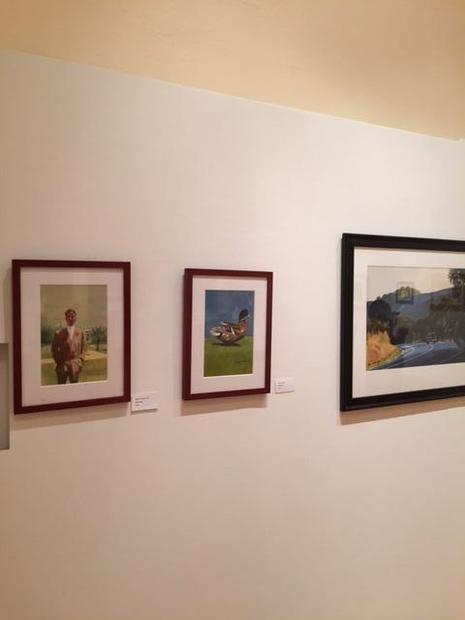 over a dozen paintings were on display. While artist Dick Cole favors landscapes and architecture, he does paint portraits and depictions of animals.
Jonathan Farrell