That is no surprise to food/ travel writer Carole Bumpus, who stumbled into a remarkable true story about a woman in France who survived WWII. “I was in France visiting, writing notes for my travel and food blog. And as I was interviewing this French woman about a particular recipe, she began to mention things about WWII.”

“My initial question that I asked the woman through her daughter who spoke English was, “What foods did you share with your family as a young wife? What food traditions do you share?”

Bumpus was intrigued with her response and asked the woman to describe a bit more. “Well, as the French woman began to talk, she began to describe the war around her and the story of her life unfolded. Under these circumstances of war, asking about family recipes seemed ludicrous. Yet, it was something I just could not walk away from and forget about,” said Bumpus.

And what struck Bumpus the most was all the odds that had been stacked against the French woman, who was named Marcelle. “Marcelle had been born the last day of World War I and her father had never returned. Her mother died when she was young and Marcelle lived with a grandmother.” Bumpus went on to say, “Marcelle would listen to what her grandmother would say about World War I and the terrible experience it was. Her grandmother believed war was not that far away and that it would start again.”

“Marcelle’s grandmother passed away about the time she was settling into adolescence, and while working at a dairy farm in Brittany, Marcelle was raped,” said Bumpus. She did not want to abandon her baby. She wanted to keep him. So, she set out to find work to support herself and the baby in Paris. “This was something not as accepted as today,” noted Bumpus. “Yet Marcelle, at the age of seventeen, was able to manage it.”

It was through an opportunity to find work in Paris at the Citroen factory, that Marcelle made a new life for herself and her little son. A year after WWII began and the Germans took over Paris, she was forced to continue working but for the Germans. As sometimes happens in wartime, Marcelle met a young man whom she fell in love with. She became pregnant once again and bore a second son. But as war was forcing families from the City to the Unoccupied Zones, Marcelle fled for the safety of her sons and she and her love were separated.

A year later, now living in the Auvergne Region, and not having heard from her love, Marcelle met a man who was “a Maquis” that was a special group of resistance fighters who did all that they could to disrupt, undermine or take out the Nazi German occupation forces that plagued most of Europe.

“She married this ‘Maquis’ as she wanted to ensure that her little ones would have a proper home,” said Bumpus. All during the war she worked alongside the resistance. Part of that was foraging for food and anything needed for survival. Authors like George Millar and Matthew Cobb write about the French Resistance and WWII. Millar has a book entitled “Maquis: The French Resistance at War,” published in 2003.

“We Americans have never experienced war on our home soil,” Bumpus said. “Yet in Europe and other places throughout the world, the people know all too well what war is like. War tears society apart, creates chaos and destroys family life,” she added. “Marcelle was determined to mend, restore and build a family. And, finding food was part of that,” said Bumpus.

After their initial meeting, Bumpus aimed at returning to France to visit all the places Marcelle had lived and to get more of her story. “Marcelle was this lovely soul, and in her struggle to survive, not only her personal setbacks but the onslaught of war, she maintained her dignity and a deep respect for life and love. Truly an amazing woman,” said Bumpus. 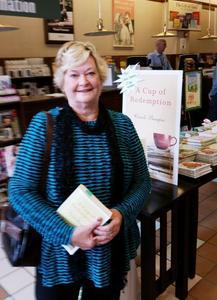 At a Barnes and Noble book signing, travel author Carole Bumpus holds her first novel “A Cup of Redemption” a story of love, war, food and survival.
Courtesy of Carole Bumpus

She met Marcelle and her daughter Josiane in early 2001 and just as Bumpus was making plans for her trip back to France, 9/11 happened. “That put a stop to our travel plans. Then a month later, Josiane was called to her mother’s side in France, where Marcelle died. Her last words were for Josiane to find her father—a father she had never known. When it was safe to travel again, Josiane called me back to France where we began searching for clues to find a man who would bring redemption to this lovely soul, Marcelle,” Bumpus said.

Bumpus did get back to France and did find out what had happened to Marcelle’s father. “Marcelle wanted so much to bring all of the family together; that was a dream and a hope she kept alive. For not only herself, but for her sons who both had been born out of wedlock. And, after WWII Marcelle, who moved with her new husband to the Lorraine Region, kept writing and sending word for her oldest son to come and live with her and the ‘Maquis man’ she married.”

Following her death, in going through all of Marcelle’s things and eventually the Maquis’ belongings in the attic of the house where he and Marcelle had lived (as he had died some years earlier), Josiane discovered all of the letters. They had been tied together, unopened and hidden in a trunk the Maquis had kept. “Apparently, the letters were returned unopened by the woman who kept Marcelle’s son, but the Maquis man hid the returned letters from his wife. “Perhaps he was jealous? Or maybe, he was afraid that this illegitimate son would make things uncomfortable in the new life Marcelle and he had built? It seems that way,” said Bumpus.

In gathering everything together, Bumpus continued on her quest to tell Marcelle’s story. “I interviewed dozens and dozens of people, more than 75 or so,” she said. And not only did she interview people in France, she also talked to people in Italy. They too had similar accounts of food and survival, much like Marcelle. This then also opened up for Bumpus an interest in WWII and the Liberation of Europe.

“What I discovered in my search was that civilians are considered ‘collateral damage’. Death tolls are kept of how many Germans were killed, how many of the Americans died and of the allied forces that had fallen. But of the general civilian population, there were only rough estimates, no exact figures. “And if you were on the fringes of society, someone like Marcelle who was an orphan as well as an unwed mother, you were definitely not counted.”

It took 12 years for Bumpus to complete “A Cup of Redemption.” She had to condense much of what she had gathered to create a novel out of a true life documentary of one woman’s life, during war time. “I had interviewed so many people in my quest,” said Bumpus. “I had to just focus on Marcelle’s life. I had written over 900 pages, of which I had to edit down to 350.”

It was not an easy task, which is one reason why it took more than a decade to get the novel published. “A Cup of Redemption” debuted last year. “And, the companion cookbook, Recipes for Redemption, which has all the recipes was just released this past summer.”

The novel has been well received as writer and memoirist, Leslie Johansen Nack affirms on her blog. “The reviews are glowing…check them out…” She noted, “I met Carole at a writing conference a few months ago and fell in love with her bubbly personality and charming ways. She has put her heart and soul into the writing of ‘A Cup of Redemption.’” Nack in her memoir entitled “Fourteen” writes a story that in some ways parallels the situation of Marcelle – having to grow up fast at an early age and endure unpleasant hardships, leaving home and building a new life.

Bumpus says that “Marcelle’s story changed my life.” She was pleased to report that the letters that Marcelle had written to her son, “got to him, but after her death. It must have been a very powerful moment when his sister, Josiane, placed the packet of letters into his hands. All those years he did not know what had happened to his mother. If she was still alive, and especially if she still cared.”

“A war like WWII causes a tremendous sense of loss,” Bumpus said. “And that is why the search for loved ones and the search for identity is imperative in the struggle for survival. Keeping a sense of family intact amid chaos is part of that.”

Bumpus believes that people need to pay close attention to the lessons of WWII and that Europe has not forgotten them more than 70 years later. “As I made my way across France while traveling with a group of WWII veterans,” said Bumpus, “visiting the villages and collecting information for the novel, I was overwhelmed by the generosity of the people who simply wanted to say ‘Thank you’ to those Americans who liberated them from the war. And,” noted Bumpus, “it was five generations of people who would come out to greet us and wanted to express their gratitude and thanks in honor of the Americans who served in WWII.”

Bumpus says she is in the midst of working on a third book that coincides with “A Cup of Redemption.” “It will be about the American G.I.s and the French men and women I met on the Liberation Tour of France, said Bumpus. “All the places where the Americans and allied forces fought and died to set Europe free.”

“A Cup of Redemption” is published by She Writes Press, Berkeley. For more information about the novel and its companion recipe book, visit the Carole Bumpus, Author web site.