Of course, artistic activities happen anywhere at anytime of year. But there is something special about art and springtime that goes well together. Perhaps it has to do with the change of the season and the warmer weather? A showing or exhibit is all the more alluring to visitors to a gallery when spring arrives. Three particular artists this reporter knows are having a debut of their latest works this spring.

The unexpected rain which fell on most of the Bay Area over the past two days, has not dampened artist Catherine Merrill’s spirit. “This gray and rainy day as I look out my window is not a worry for me,” she said to this reporter. Speaking from her home/studio in the Mission District of San Francisco, the renowned sculptress is pleased that her latest work is part of “A Sculpture Exposition – in Celebration of International Sculpture Day.”

The exhibit which opened yesterday April 6 at the Marin Society of Artists gallery in San Rafael, will continue until the end of the month. Peter Keresztury who organized the event is very pleased as he said. “I am hoping that this event and our efforts to honor International Sculpture Day (which is on April 24 this year) will help make the Marin Society of Artists more prominent. 49 sculptors are displaying 72 sculptures; and Catherine’s female torso is the only female form in the exhibit,” Keresztury added. 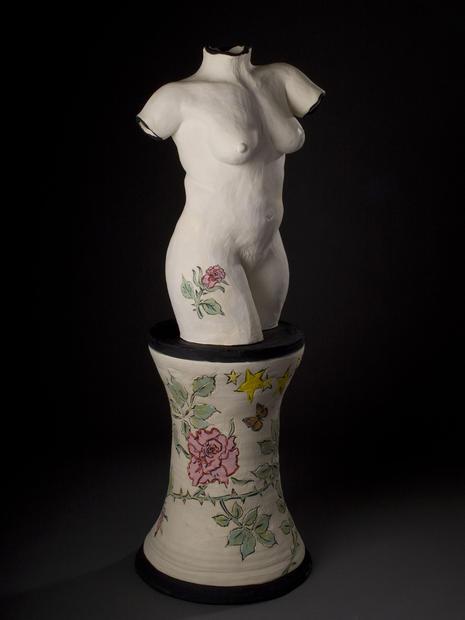 Sculptural artist Catherine Merrill specializes in the human form. Seen here is her latest work which is now featured at the Marin Society of Artists ‘Celebration of Sculpture’ exhibit in San Rafael until April 30.
Courtesy of sculptress Catherine Merrill

The human form is Merrill’s specialty and she sees it as part of her artistic mission. “The human figure is an expression of emotion and ideas. And, it appears to me she said that the human form is among the highest forms of expression of life in all of creation.” Merrill noted that the human figure (whether female or male, with or without clothing) has been the basis of all art forms in human culture for ages throughout the entire world.

Spring time and the human form, especially the female form are synonymous with life itself.

Coincidentally, just a few blocks away in San Rafael, another local artist Cynthia Tom will be having her exhibit in May called “Awakening the Feminine,” at The Founder’s Gallery -part of ArtWorks Downtown on Fourth Street. She too also sees connection between the female and its powerful role in all of nature.

While Cynthia Tom’s solo exhibit – “Awakening the Feminine” is to be a display of paintings, she is no stranger to sculpture. Cynthia’s work is surrealist. Her work lends itself to mixed media (multi-dimentional) and installation type of exhibits. Some of these over the years have been exhibited on a grand scale; and full of meaning. Viewers of her work have been invited to experience her work, through large scale pieces or intricate tactile details that viewers/visitors can reach out and touch. Cynthia has also examined subjects difficult to discuss thru her art work. Yet in doing so, she has promoted important dialog-communication and healing.
Her painting series which will debut on May 6, is intuitively inspired by community. Cynthia notes that the series is about “the gathering women’s movement, our collective female ancestors and women rising.”

Spring time speaks of creation’s power and without a doubt, women are an essential part of that power and this is something Cynthia wants to celebrate and honor. Spring is also a time for gatherings and art is one way a people can connect and build a sense of community. The Sanchez Art Center of Pacifica less than 40 minutes from San Francisco along The Peninsula is having its annual “Left Coast Juried Exposition” beginning on April 21. It will continue until May 21. The Sanchez Art Center will also have its Open Studios in May.
The Peninsula Museum of Art in Burlingame has its weekends set for “Family Fun Days” which began on April 1 and will continue all spring, to summer and into early fall. The museum is calling out to all art lovers, big and small. “Bring your family and friends to the museum,” says founder and Executive Director Ruth Waters, “on the first Saturday of each month for fun and interactive activities that explore art and creativity. Enjoy the exhibitions and make one-of-a-kind artworks.”
The South San Francisco Cultural Arts Commission and the City of South SF are inviting sculpture artists to submit entries for art to be considered for installation at various designated areas in and around South San Francisco. Deadline for entry applications is May 10. For details visit the City of South San Francisco web site. To learn more about sculptor opportunities and artistic actives along the Peninsula and adjacent South Bay Area (of Silcon Valley) visit The Peninsula Arts Council website. 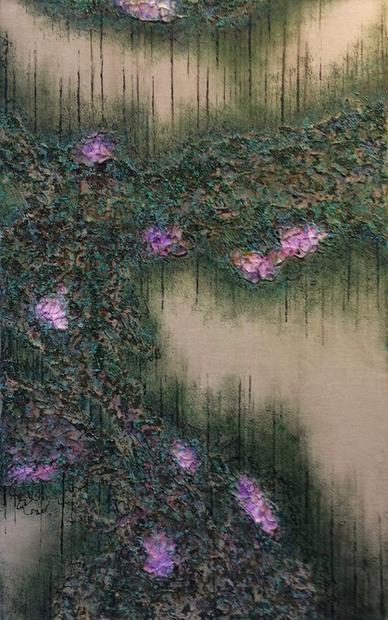 An abstract piece by Doug Comstock, from the Open Studios show this past fall at Art Explosion studios, San Francisco.
Courtesy of Doug Comstock

Moving from sculpture and painting regarding the female form and feminine mystique, the abstract expression can also stir thoughts, ideas and emotion. Art Explosion gallery in The Mission District will be featuring the work of Doug Comstock in its ‘Spring Show’ this weekend.
While his work for this weekend’s showing takes on no particular form or defined theme as with the works of Cynthia Tom and Catherine Merrill, his abstracts reveal the subtle and subconscious aspects of creativity.
Abstract art has been growing beyond its 20th Century awakenings; as art critics have noted in the U.K.’s The Guardian, “western painting is the pursuit of reality – that in effect representational painting has a scientific vocation.” It is easy to overlook that much of the art since WWII has been interpretive. And, fortunately for Americans much of it, was made right here in the USA, as New York City was ‘the center’ for art and fashion in the 20th Century. Like it or not, names like Jackson Pollock, Andy Warhol were all part of that abstract phenomenon. 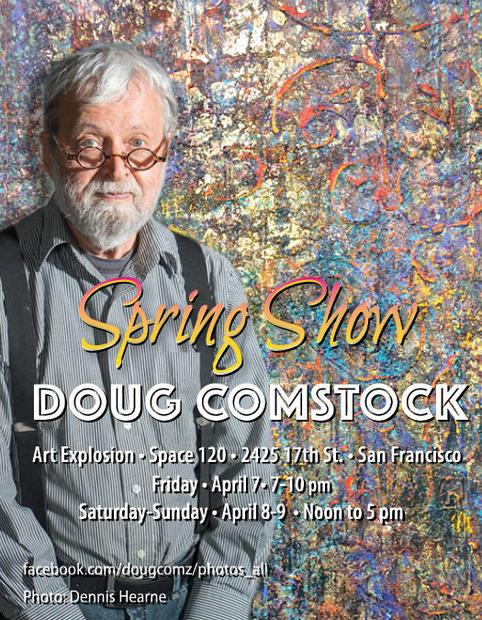 When not painting, Comstock is editor of The Westside Observer and this weekend’s ‘Spring Show’ will be his third exhibit, so far. Reception and showing begins this Friday evening at 7 PM and will continue to be shown until Sunday April 9 from 12 Noon to 5 PM. For details visit the Art Explosion studios page on Facebook.