However, the people that receive its services made it known that they will miss a beloved postal worker there who died suddenly during the holiday season.
Kathy Gerletti worked at the El Verano station and, by all accounts of those who knew her, she was well-liked by everyone. Of the three post offices in Sonoma, the El Verano station is a bit like stepping back in time. For those unfamiliar with Northern California’s wine country, Sonoma has its touristy-upscale East side and its more rural West side. Right next door to the post office is a little country grocery-convenience store. 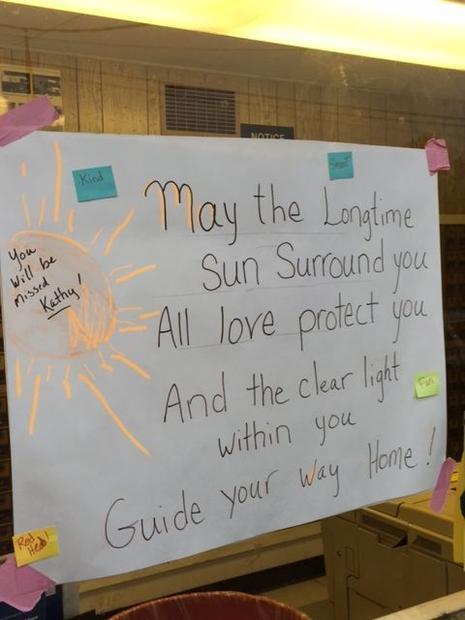 People who frequent the little post office station on the West side of Sonoma paid tribute to a beloved postal worker who died shortly after the Christmas holiday of a stroke on Dec. 29. Flowers, notes and letters to the editor of The Sonoma Valley Sun all expressed shock and grief at the loss of someone that was very much a part of the local community and a cherished member of the postal service.
Jonathan Farrell

It almost seems like a bit of a sleepy little town one reads about or sees on old TV shows like “Mayberry RFD” or “Green Acres.” Unlike larger post office stations, El Verano is conducive to being able to provide a bit more attention, because it is small and lines are not always out the door as in other locations.
Still, according to locals, like Readers’ Book Shop owner Andy Weinberger, “Kathy was a vivacious redhead.” “A gem.” Even though Readers’ Books is on the more upscale East side of town near ‘the plaza’ Weinberger took the effort and time to go there. “We brought our business there because of Kathy, he said. She was an amazing people person — not just energetic but upbeat, and generous to a fault.”
Obviously, the people appreciated it very much because like everywhere lately, good customer service is lacking. Weinberger noted in his weekly newsletter that the El Verano station was among those listed to be shut down.
Yet if officials and federal administrators really listened and paid attention, they would see very clearly that good customer service goes a long way, even in a small community. While we all know bureaucracy and government hierarchy has its formalities, the response to Gerletti’s death struck a chord that required a heartfelt acknowledgement beyond routine and formal protocol.
The staff at the El Verano station posted a large notice in the window, telling patrons that “Kathy had suffered a stroke on Dec. 28th.” And that complications from the stroke took her life on Jan. 5.
Weinberger wrote in his Jan. 16 newsletter about her passing and alerted the Sonoma Valley Sun newspaper, pointing out that ‘very little mention of it’ was said from Sonoma’s largest newspaper, The Sonoma Index-Tribune.
The editor and owner of The Sonoma Valley Sun, (in the Jan. 21 issue) Val Robichaud, said simply “Kathy is Community.” He dedicated a portion of the editorial page to her. And, the outpouring of grief and shock at her sudden departure expressed something rare that even in a small close-knit community like Sonoma doesn’t experience all the time.
Stroke is the fourth leading cause of death in the United States, according to the National Institute of Neurological Disorders and Stroke. Gerletti was under 55 years of age. “I just can’t believe it,” said Sonoma resident Kathy Ostram. “It was like I just saw her at the post office the other day or just last week, it can’t be.”
Yet when Ostram walked over to Bay Street, not far from her house where the post El Verano office is, she read the notice posted in the window. Flowers and little sticky notes surrounded a poster also placed in the front window. On one side of the poster was written “You will be missed Kathy!”
“People invariably shake their heads and say it’s a tragedy whenever someone dies before their time,” noted Weinberger. But tragedy, he said, is an overused term, in my opinion, and this was more than that. “This was robbery,” Weinberger said. “Kathy was stolen away from us and God only knows why.” 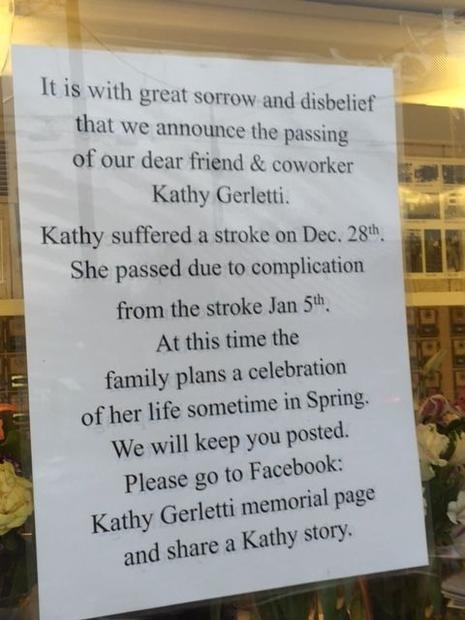 El Verano Post Office in Sonoma put up a notice on the window regarding the loss of one of their staff members who died suddenly shortly after Christmas. Patrons of the post office on that side of town were in shock to hear the news.
Jonathan Farrell

Letters to the editor in The Sun, all reverberated similar feelings and thoughts about someone who made an impact on their lives. Deb Carlen referred to Kathy as “the life’s breath of the tiny funky post office.” In Denise Reynaud Kennedy’s letter, she said that the El Verano station “should have been called Kathy Gerletti’s Post Office instead El Verano.”
A longer version of Kennedy’s letter on Facebook was printed out and posted alongside the notice and the poster.
The U.S. Postal Services handles 40 percent of all mailing and package-sending world-wide. And according to its stats of 2014, the USPS generates revenue of nearly $68 billion.
While El Verano station may seem like an insignificant post office station on a dusty little side street to administrators and various bureaucracies in government who think it should be closed, to the people it is a lifeline. This reporter observed that even if officials cite some sort of statistics as a means to shut the station down, compared to the info, I just quoted (from the USPS web site), to shut the station down makes no sense.
And most likely because of a dedicated postal worker like Kathy Gerletti, no doubt the people of the community here in Sonoma would definitely shout out and be heard if closure were to happen. In this age of computers and Wi-Fi technology, the need for customer service and human connection is there. The prevailing trend to have more ‘self-service’ kiosks and ATM machines doesn’t eliminate the need. In some ways it exacerbates the need.
Weinberger in closing also said, “And now, every time I walk into a post office, I know for a fact that I’ll be thinking about her. I’ll be glancing all around and I’ll be hoping that somehow she’ll be there again, talking to customers, counting out the stamps, doing three things at once even while she hums to herself behind the counter.”

“This is magical thinking, granted. And you know what? I don’t care. Kathy was just that kind of person. She was alive; she was magical.”

The Gerletti family will have a memorial service at some time in the spring. They ask that people look to Facebook at the Kathy Gerletti memorial page for upcoming details.