He died on Sept. 26, after an illustrious career as a painter, writer, poet and musician. Long-time friend Francie Ward wanted Cole to be remembered by the community he enjoyed for so many years. “When I received the Sonoma Community Center’s Newsletter this past Oct, I wondered if Dick wouldn’t fit right in amongst the company of other Sonoma heroes like… Jack London, Norton Buffalo, Alma Spreckles, August Sebastiani, Aguston Haraszthy, MFK Fisher, Dan the Chinese Worker, General Vallejo and James Zellerbach… etc. I bounced the idea off Anne Ziemienski, a mover/shaker with the Plein Air Association — (she serves on the Board). And, she followed through sending in the nomination to the Center, ASAP! And, they agreed,” said Ward. 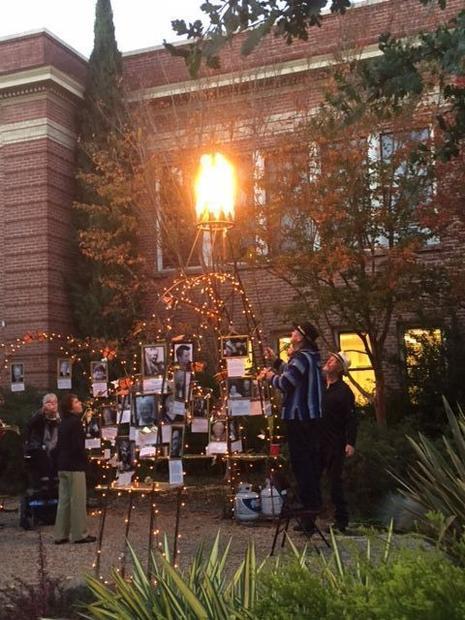 The lighting of the flame at the center of the display took place at dusk on Nov. 1 at the Sonoma Community Center.
Jonathan Farrell

“The idea of our Day of The Dead display here at the Center was created by local sculptor, Jim Callahan, some years ago,” said special projects manager for the Center, Margaret Hatcher. “The 12′ tall structure adorned with lights and paper butterflies annually exhibits portraits and stories of nearly 75 individuals who have made extraordinary contributions both large and small, to life here in Sonoma Valley.”
The altar display went up on Oct. 26 and welcomes passersby to stop and pay respects.
While an official list is composed each year, based upon deceased persons being nominated by community members, all families are encouraged to bring photos and flowers to honor their loved ones at ‘the altar’ — display outside the Center, in what is formally known as the Maloney Memorial Waterwise Garden.
Food of tamales and chips and salsa this year was provided by Maya restaurant which is located near the Plaza at the center of town. Day of the Dead celebrations have become a fixture throughout all of Sonoma County from the town of Sonoma to Santa Rosa; from Petaluma to Healdsburg. Day of the Dead is common throughout all of Mexico, and is a very ancient celebration that traces back to the tribes of the Aztecs, Maya and other Meso-American civilizations. It has only been in recent centuries that The Day of The Dead has been linked to Halloween and incorporated into it. 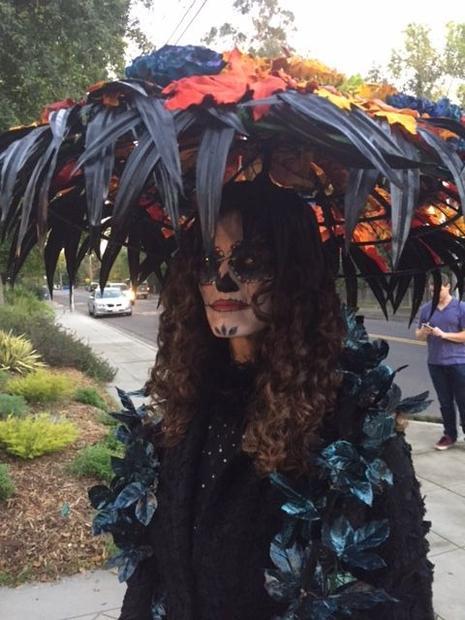 While some might view the celebration of the Day of the Dead as macabre, it is a celebration of life, very festive and colorful, as seen here. Local resident Caitlin wanted to dress up and partake in the festivities.
Jonathan Farrell

I was sad to hear the news of Cole’s death from Ward as he was a member of “The Write Stuff” writers group, a long standing gathering that I had attended almost regularly for the past three years. Founded by former San Francisco Chronicle editor William Chapin, more than 20 years ago. The informal group attracted many talented writers over the years who all became good friends.
Ellen Shepherd who was among the founding members noted, “Bill and Dick could go on for hours. Their wit and sharp insights were formidable,” she said. “And, that made the group very interesting.”

Hatcher and ceramics program director Kala Stein both praised Cole for his outstanding work as a water color painter. “He always had time to teach a class or two here at the Center,” said Stein. “Even with the beginners he was always able to help students take it to the next level.”

Many in the community I talked to from time to time would note Cole’s talent and how much they admired him. When he had a showing of his work at The Center last year, people commented on the outstanding craftsmanship of his composition. Manette Fairmont, who owns and operates Fairmont Gallery on the plaza in town, referred to Cole as “a realist and a representational painter. I respect his work very much,” she said. The Fairmont Gallery has featured Cole’s work from time to time.

“I represented him for about eight years,” said Manette, when I talked with her last year about his work. An artist herself, she has served on some of the same panels and committees for art competitions as Cole has over the years. Both have held the honor of the title, “Master Watercolor painter.” 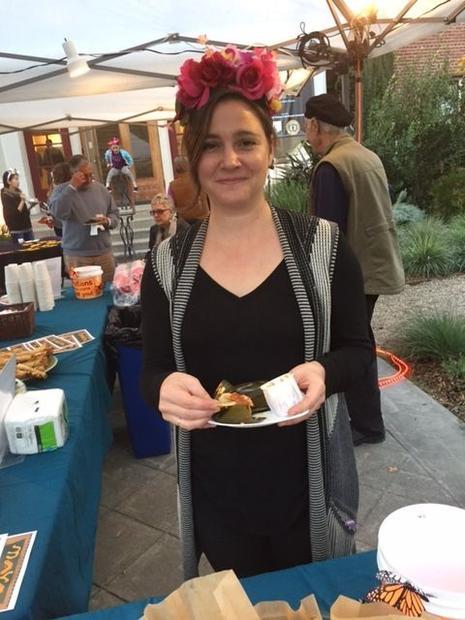 “He was so talented and taught many classes here,” said Kala Stein, ceramics projects director at Sonoma Community Center, which hosted its annual Day of The Dead Celebration from Oct. 26 to Nov. 4. On Nov. 1, the community gathered to remember artist and teacher Dick Cole.
Jonathan Farrell

Cole also was closely associated with the Plein Air Association and its foundation here in Sonoma along with other artistic and creative associations and collectives. Whether he participated as an artist or served on a committee as president or chair, Cole always stood out. His easy-going manner and clever sense of humor made him approachable. Yet as a talent and an outgoing personality he was also very formidable, with a sharp intellect and an eye for detail in more ways than just on a canvas.

Born on Nov. 4, 1927, Cole was a fourth-generation Californian. As noted by The Sonoma Valley Sun, Cole grew up in Redlands, near San Bernardino. After graduating from UCLA with a degree in art, he enrolled at the Art Center College of Design, now in Pasadena, to earn a BFA in “what was called advertising illustration” as he would say, so he could earn a living.
Moving to New York, Cole went to work as an art director at Young & Rubicam, a large advertising agency, in 1956. He helped create magazine ads for Dupont fibers Nylon and Dacron.
He talked about many experiences he had, while at the writer’s group. Often times, through his writing, the pieces he presented to the group were in prose. Cole’s command of words and the power they possess was impressive.
Even with declining health, he was always eager to help and found just as much interest in looking at other people’s works as his own. 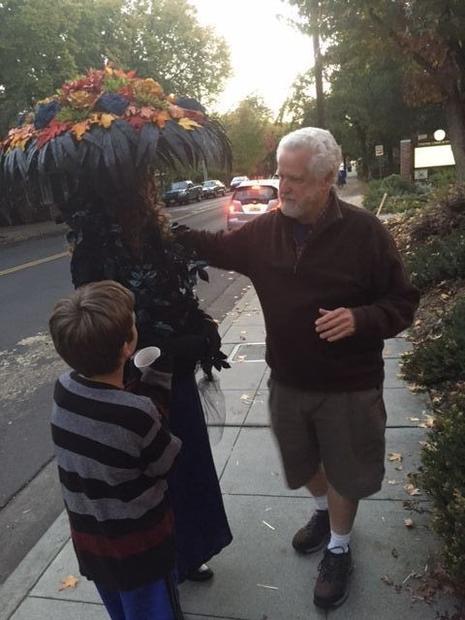 Artist and fellow writer’s group attendee who knew Dick Cole for many years, attended the celebration on Nov. 1.
Jonathan Farrell

He mentioned to the group once that on the first day of work at Young & Rubicam his boss took him shopping at Brooks Brothers on Madison Avenue, advancing him the money to buy a couple of conservative gray suits for work. I guess it’s fair to say he was part of the original ‘ad men’ and did what was required as most men of his generation did, conforming to the norms of the 1950’s in that ‘gray suit.’ Five years later he transferred to the agency’s San Francisco office. But he also took time to travel and explore other interests, such as music. Even as he did what was required, his interest in many things, never wavered. And, neither did his courage to pursue them.

Cole was mesmerized by the energy that was brewing beneath the surface of society right after World War II. Before Rock and Roll, there was that time in between the Big Band Era of Swing and the Rockabilly sound. It was what we now call modern Jazz. But for Cole and those of his generation (while it was unfolding), it was the music, the energy that was happening. He mentioned this to the group once and had noted the spots in Los Angeles where he had been.

In the early 1960s, he joined designer Primo Angeli to start Cole & Angeli, a graphic design studio with offices in San Francisco and Palo Alto. Among his clients were Hewlett-Packard, IBM and Memorex. As he told The Sun, back in 2008 when he was appointed National Water Color Society president, he always wanted to get back to painting. Yet Cole wasn’t doing much of it then. Still, he did take occasional classes at the San Francisco Art Institute to maintain his skills.
In the early 1970s, he sold his share of the business to his partner and became a freelance illustrator, doing lots of work for textbook publishers, mostly pen and ink and some watercolors.
Cole moved to Sonoma in 1991 to get out of San Francisco, (which he referred to as ‘The Gray Lady’) first living in Schellville, then on the east side. Watercolors became more of a focus after American Express hired him to paint a series of ads promoting various resorts. Cole taught graphic design and illustration at San Jose State and the San Francisco Academy of Art. And, he also made time to conduct workshops or help with coordinating judging panels for art shows and competitions. 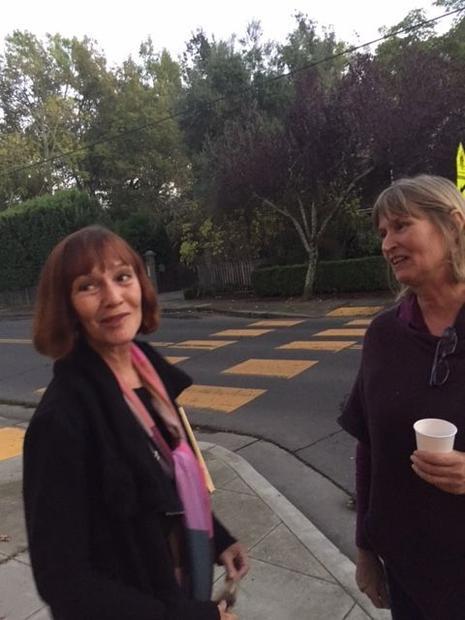 Long-time friend of artist Dick Cole, Francie Ward, (on the left with scarf) sought to have him remembered among the recently deceased at the annual Day of the Dead altar commemoration on Nov. 1, 2016
Jonathan Farrell

Cole’s many interests thru art, attracted many people to him and he was able to maintain his interests and friendships right to the very end. “We miss him already, said Hatcher. He was so much a part of the Sonoma Community Center and very much a part of the entire Sonoma Valley.”

Friday, Nov 4, would have been Cole’s 89th birthday. And as Ward said, “we wish to honor his memory. Display a picture of him and raise a glass or two. This is an opportunity to allow joy to mix with tears, as we celebrate him and that life goes on. Perhaps, just not in the same form we were used to and felt comfortable with here on earth,” she added.
Cole’s daughter Elizabeth will fly down from Seattle with her husband Jason to be there on the last evening of the Día de los Muertos Altar on Nov. 4. They will be by the Altar from 5:30-7pm, to meet with friends, family and anyone who knew Cole.
“Dick would be so proud, said Ward. “And he’ll continue to be there year after year, like his predecessors.”

For more information about the display and the closing ceremony, contact the Sonoma Community Center by visiting its website. And, see the Center’s page on Facebook.

In this article:California, day of the dead, Dia de Los Muertos, Sonoma