At least that’s how one former San Francisco radio personality, Tommy Saunders sees it.
A familiar voice that had filled the airwaves of local Bay Area stations like KYA, KSFX, KSFO and KOIT for 43 years, Saunders took some time to chat with this reporter while on assignment for the Richmond Review. He talked about his days as a radio announcer, talk show host and rock DJ.

“My best memories are of the 1960s and the radio scene as it was then,” he said. “Some really good times, never to return, and of course a lot of it had to do with being young and foolish, as they say.”
Saunders arrived in San Francisco in 1962 having just turned 21, from the town of Kenmore, not far Buffalo New York. It was certainly the most exciting time in his career, he noted. “When I was offered a job here at KYA I couldn’t refuse, I jumped at the chance. And, then once here I found it impossible to leave, he said. It’s still beautiful around the Bay Area, despite the many changes.” 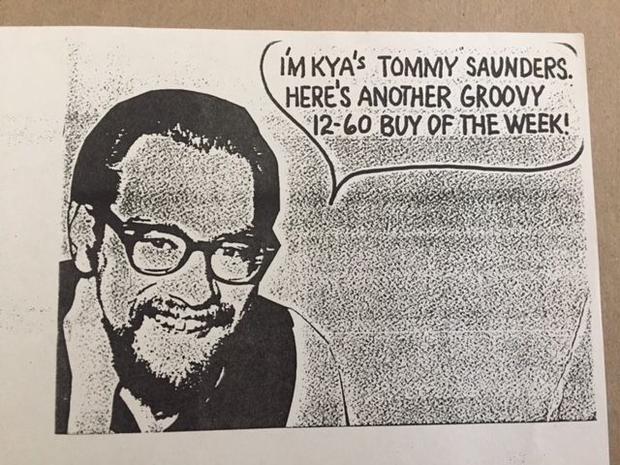 Tommy Saunders in an ad from the 1960s promoting KYA AM radio San Francisco.
Courtesy of Tommy Saunders
Saunders pointed out ”Really when you think about it, radio jobs are like most other jobs, the same formats no matter where you live.. it’s the place that makes a difference. I was always mindful of that. Why live in Peoria when you can live here? Unless you’re from Peoria….”

Saunders also noted how insecure and unstable the radio business was and still is today. “Over time as a station is sold or traded, and it happens a lot, a new boss arrives with many of this old buddies from out of town who he thinks he can trust and who hopefully will ask for less money so the boss can get rid of the high-paid talent.”
“I shouldn’t complain because that’s how I got here myself, along with many others. That happened all the time, unless the station has a talent so popular they can’t afford to lose him or her. Like a Don Sherwood let’s say, for example, who was San Francisco’s only irreplaceable DJ. And even Sherwood had his problems… some of them were his own making.”

As Saunders tells it, Sherwood was said to have told one of the new DJs at KSFO long ago who asked him for tips: ‘I got some advice for you, kid. Heard your show…(pause)….RENT, Don’t buy!’ That’s what Sherwood said (according to Saunders). “Sounds nasty,” added Saunders, “but it was actually good advice.”

Pointing out just how mercurial radio could be, KYA for example (as mentioned by Wikipedia) had 14 owners and over four different call-signs in 85 years. Saunders confessed, “I was not a big fan of hard rock or the top 40 formats of KYA and KEWB. But I loved the middle of the road ‘Great American Songbook’ stations, the easy-listening stations.” 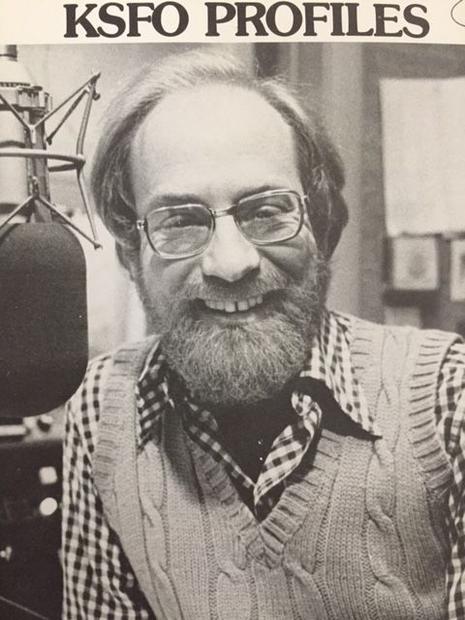 Tommy Saunders at KSFO AM radio back in the 1970s.
Courtesy of Tommy Saunders
Saunders got to know just about everyone in local radio and TV at the time. Radio personalities Gene Nelson, Gary Mora, Sam Van Zandt, Russ Syracuse, Tom Donahue and Hap Harper were his contemporaries. They often gather from time to time, especially for commemorative events.

Today at age 75 Saunders is happily retired with his long-time companion Vivian, and glad to be out of the business. “My shoulders went down two inches when I got out of that racket…. I couldn’t get a decent radio job today anyway, and without a lot of luck I might have wound up selling Lotto tickets at the corner liquor store long ago.”

While many may see the digital revolution as positive for audio media, Saunders is not so sure. “Lots of us old-timers miss the companionship of real radio personalities who are almost totally absent now, and the little mom-and-pop stations that weren’t afraid to take chances in their programming, versus the syndicated corporate-owned stations we have here in San Francisco now who live by focus groups and what other stations do, rather than realize they’re supposed to serve our community, not ignore it.”
“They’re dull and repetitive… almost unlistenable. Women in radio have had especially bad luck… with the loss of so many good jobs. When I started in the business there were unfortunately almost no women on the air. Today they’re on radio but often pre-recorded but not able to say anything interesting or funny in 10 seconds, it’s all cut and dry. Today,” said Saunders, “I listen only to five stations — all FM! And four of them are noncommercial… which are: KQED, KALW, KPFA,KDFC, and KCBS-FM; but the latter only for weather. With all the changes it’s like everything else in town — totally changed, but still a little intriguing, you know? AM radio sadly is almost dead and in its grave,” Saunders lamented, “as you can tell by the lack of listenership. I regret that.”

Saunders was able to stay in the business — by maintaining friendships and contacts. “There was lots of work back then,” he said. Yet, by the 1980s, more change.

“Rock music took over completely,” he said, and stations like KABL died. When Saunders talks of rock music;p taking over, he means the more recent stuff. “Not the classic. I am talking about the formula Top 40 programing that made all of the stations sound alike,” he said.

Saunders witnessed unprecedented change during his tenure in radio. In the 1970s FM brought in new listeners. But with the Reagan administration’s deregulation of media in the 1980s, local radio got taken over by corporate interests. “So I have a little different spin on what happened,” he said. Automation, pre-recorded formats and syndicated programming became the norm.

Speaking on behalf of the California Historical Radio Society and Museum, founder David F. Jackson noted, “what Tommy said is pretty much what happened. It used to be a local personality could make a good living being a radio announcer and DJ but not now. It all started to change in the 1980s and of course with the Digital Revolution, the days of radio was we knew it were fading fast.”

Saunders knew all too well the days of local radio personalities like Gene Nelson of KYA and KSFO and Bill Moen of KABL were ending. He could see it coming. “With all the changes in media today, frankly I do not miss it,” Saunders said. 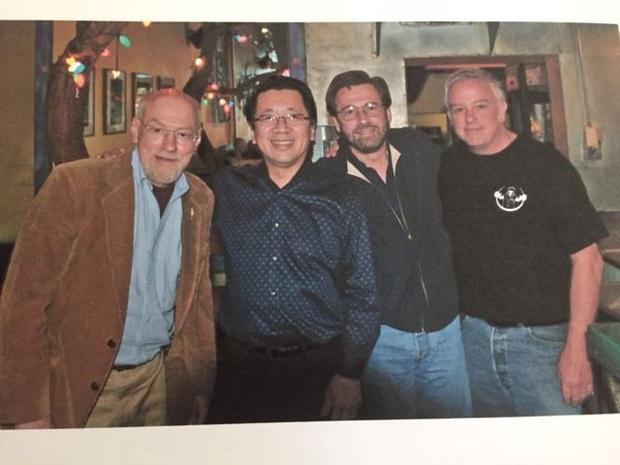 One of the many gatherings over the years., of local media and radio personalities of the SF Bay Area. This was taken in 2010. From left to right are: Tommy Saunders, Ben Fong-Torres, John Catchings and Dennis Callahan.
Courtesy of Tommy Saunders
Even so, Tommy Saunders feels fortunate and blessed to have been on the air when it was fun, and hopes he brought some happiness to the Bay Area listeners when he could.

To learn more about the history of local radio in the San Francisco Bay Area visit the California Historical Radio Society and Museum web site.