“It’s just for cookbook authors she told this reporter, and some of the best in the world. So, I’m pretty stoked.”
Founded in 1989, Les Dames d’Escoffier (LDEI), San Francisco Chapter is an invitational organization of women leaders in food, beverage and hospitality whose mission is education, advocacy and philanthropy.

“LDEI is an international organization of women leaders who create a supportive culture in their communities to achieve excellence in the food, beverage and hospitality professions,” said Karen Mackenzie speaking on behalf of the organization. “To do this LDEI members must share knowledge, support members and provide leadership, educational opportunities and philanthropic events for the larger community,” she added.

Fortunately for Bumpus, just like her novel “A Cup of Redemption” the opportunity to be part of this unique-one-of-a-kind event presented itself, unexpectedly. “As president of the California Writers Club for the San Francisco-Peninsula branch, it is my job to keep all of our members informed,” she said. “It just so happens that my newsletter editor also works with Les Dames d’Escoffier and also the San Francisco Professional Food Society, explained Bumpus. She was so taken with my novel and its companion cookbook, “Recipes for Redemption” that she approached Les Dames d’Escoffier; and it went from there.”

“Confirming its role as one of the world’s top food cities, San Francisco boasts more award-winning cookbook authors than any other city on Earth, and many of them happen to be both women and members of Les Dames d’Escoffier,” said Mackenzie.
Among the top chefs and authors participating in the event are Teri Sandison, Paula Wolfert, Dorie Greenspan, Joyce Goldstein, Diana Kennedy, Jerry DiVecchio, Amy Guittard, Leslie Sbrocco and Georgeanne Brennan, among many others. The authors will be offering signed copies of their books for sale, and many will offer samples of favorite recipes featured in the cookbooks.

Funds raised through the sale of $10 advance tickets ($12 at the door) will benefit the Culinary Scholarship Fund of Les Dames d’Escoffier San Francisco. For more than thirty years, the non-profit organization has supported aspiring women chefs, authors, scholars, and hospitality professionals.

“Never before have so many leading lights of the culinary world gathered in one place specifically to meet fans, share insight, and raise funds for a worthy cause,” said Helen Roberts, president of the San Francisco chapter. “This is a once-in-a-lifetime event that brings together more culinary talent under one roof than ever before.”

Bumpus noted that she is very honored and grateful to have been invited. Her book “A Cup of Redemption” and its companion cookbook emerged very unexpectedly during her travels as a food and travel blog writer. She was in France and while asking a local French woman about what she prepared for meals at home, the woman began to talk (through an interpreter) about experiences of World War II. The woman’s life-story was so compelling that Bumpus went back to France after her initial trip for the blog and spent the next 10 years, arranging the basis of the woman’s story into a novel. 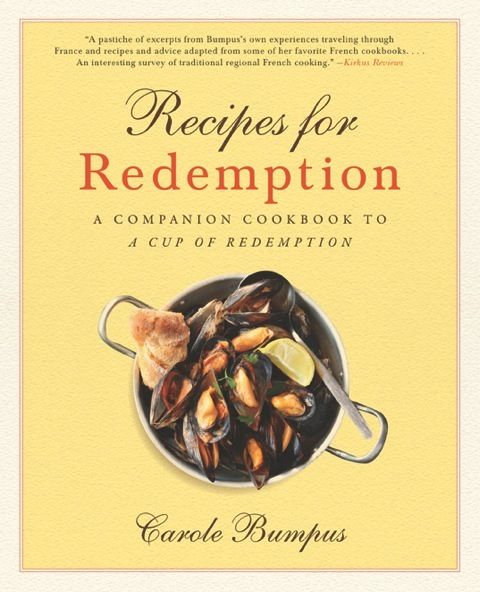 Yet even so, the recipes Bumpus featured in her companion cookbook were impressive enough to inspire a chef, Geoffroy Raby to place them on his menu. Raby who is owner of Cuisinett, an authentic French bistro on San Carlos Avenue, just off El Camino Real in San Carlos, has been reaching the hearts of Peninsula customers with his down-to-earth approach to the classic French cuisine.

Bumpus is looking forward to the ‘Literary Feast’ event which will be held at San Francisco’s Ferry Building on November 13, from 3-6 PM. Advance tickets are available through the CellarPass web site. For further details visit the Les Dames d’Esscoffier, San Francisco Chapter web site.