As the past holiday season was in full swing many were eager to take off for vacation or simply relax. But even in wintertime anything can happen, with regards to Earthquakes. The shaking in Bodie as reported in The San Jose Mercury News and the LA Times, is an example of that.
Dr. Matt Springer, PhD never tires of speaking to various groups about earthquakes and being prepared.

This past summer he and Sherry Boschert of Neighborhood Emergency Support Team (NEST) were guest speakers at the monthly meeting of the Sunset Heights Association of Responsible People – (SHARP); to get that message out to residents of the Sunset District.

They spoke that Monday evening on June 27 of 2016, about Earthquake Preparedness and its importance. They wanted to emphasize that no matter how routine and normal things may be for the moment, the geological occurrence of an earthquake is always inevitable. Earthquakes are part of California lifestyle whether we like it or not. While this reporter was on assignment for the Sunset Beacon, Springer talked about his work. He said that both he and Boschert were surprised and pleased by the large turn out of people.

“We had a full house. Almost standing room only,” said Springer, “and that was really great.” He talked with me after the meeting to explain why he has devoted a lot of time and effort to raising awareness of Earthquakes. And when I reached out to him again just after the earthquake activity at the little ghost town of Bodie along the California/Nevada state border, he responded saying, “I view such moderate quakes as a double-edged sword, as it is good that they remind people about earthquakes and hopefully remind them to improve their level of preparedness.

“But also,” he added, “they are a little worrisome if they lull people into thinking that this is what an earthquake feels like. We must not get lazy about it, he said, being prepared simply makes good common sense.” He wrote an article about small earthquakes and their influence for his blog.

A native of Southern California, Springer noted that he has been aware of all the major quakes of the last 40 years, especially the Northridge Quake of 1994. “That one impacted my family (my parents home was damaged) and so that was significant,” he said. He was in the City for the Loma Prieta Earthquake, but the Northridge Quake got his attention completely. Springer from that time on considered earthquakes more seriously.

As a professor of cardiology at UCSF Medical Center, Springer would spend time during his off hours, learning more about earthquakes and seismic activity. From information provided by the U.S. Geological Survey center in Menlo Park he pursued seismic activity and reports more attentively. The U.S. Geological Survey Center has a web site that is available to the public. His study and info gathering lead to a presentation he gave rather causally. He joined the Neighborhood Emergency Research Team – (NERT) in 2007. He is not a spokesperson for NERT, yet he mentions the preparedness training program in some of his presentations. Since 2007-2008, he has devoted more time to speaking about earthquake activity-awarness and preparedness to many groups and organizations like SHARP. 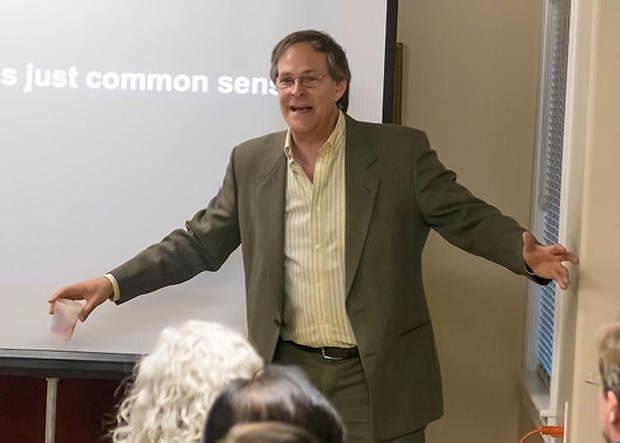 Prof. Matt Springer speaking to the members of SHARP this past June of 2016 in the Sunset District. Neighborhoods like the Sunset are among the most densely populated areas and is built on former sand dunes, which makes it vulnerable to seismic activity.
Courtesy of SHARP, SF

“The NERT program was started in 1990,” said Lt. Erica Arteseros of the San Francisco Fire Dept. “It was inspired by the community’s involvement in the response to the Loma Prieta earthquake in 1989.” She is pleased that people like Springer are working to get the word out there.

Not to be confused with NEST. The two, while united in purpose are completely autonomous of each other. Boschert took a moment and explained, “NERT provides official emergency preparedness training, where as NEST is part of and fiscally sponsored by the Inner-Sunset Neighbors, a non-profit community organization. NEST’s function is to help gather resources and supplies for the neighborhood and its collaboration/participation in NERT. NEST has regular meetings to discuss and plan preparedness strategies and encourages people to take the NERT training and certification.”

Since its founding in 1990 NERT has 24,700 San Francisco residents to be self reliant in a major disaster. “NERT program training and certification is free, fun and our firefighters teach it,” said Lt. Arteseros. “The Department (SFFD) schedules 25 full training series throughout the City each year. The program focuses on the basics of preparedness, and gives people practical hands-on skills to be able to act in a safe manner in an emergency situation. Our training provides the system to operate as a Neighborhood team that assists community members and coordinates with the Fire Department’s response in disaster.”

According to Boschert, there are over 500 certified NERT members in the Inner Sunset and Golden Gate Heights area. The reviews about NERT on Yelp are five-star and praising.

While technological innovations over the past two decades since Loma Prieta and Northrdige have helped to advance safety during and after an earthquake, the ability to accurately predict an earthquake is still not certain. This is another reason why Springer works tirelessly to make presentations throughout the City. His schedule for this year 2017 is filling up. In addition to his website, Springer also has a blog that provides Earthquake preparedness tips and info.

“The first thing people should do in an earthquake,” said Springer, “is be aware of your situation, (where you are, etc.) and know what specific risks you face in that very moment.” Knowing one’s ‘situational awareness’ is of “the utmost and crucial in any emergency situation,” added Springer.

It really speaks to “what you should have already done before the earthquake starts,” said Springer. “While, initially this might sound a bit odd… since you don’t know ahead of time when an earthquake is going to start, you should practice situational awareness as an every-day state of being. This will help you to react to not just earthquakes, but to any unexpected dangerous situation.”
Springer gives an example. It is sort of like when the flight attendant asks you to please pay attention to the brief “in the event of an emergency” presentation before take off on an airplane. “It seems like an annoyance… but it really takes no extra effort and doesn’t interfere with your present relaxation (or happy circumstance like being on vacation). ”

Jeremy Friedlander of SHARP who helped coordinate the meeting that Monday back in June was also pleased at the turn out. “I’m glad we filled the room,” he said. “I didn’t expect that.” Friedlander also noted that attendees from 25 households got a free hanging LED flashlight, courtesy of Cole Hardware, Others in the audience got $5 gift certificates to Cole Hardware. “Thank you Cole Hardware” he said.

Despite the seriousness about Earthquake preparedness, Springer had some good news. “Preparing for an earthquake is not that difficult.” he said.

To learn more about Earthquake Preparedness and the Neighborhood Emergency Response Team program, visit the NERT web site. And, see the NERT page on Facebook.