Variety points out that even though the film is available on Hulu, many die-hard fans of the ‘Fab Four’ still prefer to see John, Ringo, George and Paul on the big screen. Variety also reported that “Eight Days A Week” earned over $1.5 million in its initial release to limited engagements at theaters in selected cities.

This comes as no surprise to someone like Marti Edwards who was 16 in 1964 when The Beatles premiered to the American public on the Ed Sullivan TV show. “I was astonished, she said as she talked with this reporter. The clips in the documentary, especially of Shea Stadium, brought back so many memories.”

Edwards remembers being so impressed by The Beatles that when she first saw them on the Ed Sullivan Show, “I told my mother, ‘I am going to meet them.’ Of course, my mom said that it would be impossible for me to to meet them in person with all the thousands of screaming teenagers. But I was determined to meet them,” said Edwards. “I just knew within me that I could do it.”

And soon after seeing the Beatles on TV, Edwards managed to organize a fan club for her Chicago-neighborhood area. She served as President of the Chicagoland Beatles People Fan Club. “We were able to get together over 1,000 fans for the club. And, that was back when there was no ‘social media’ or technology. We, ourselves were the outreaching force not a device; we built a network of actual people who were fans.” 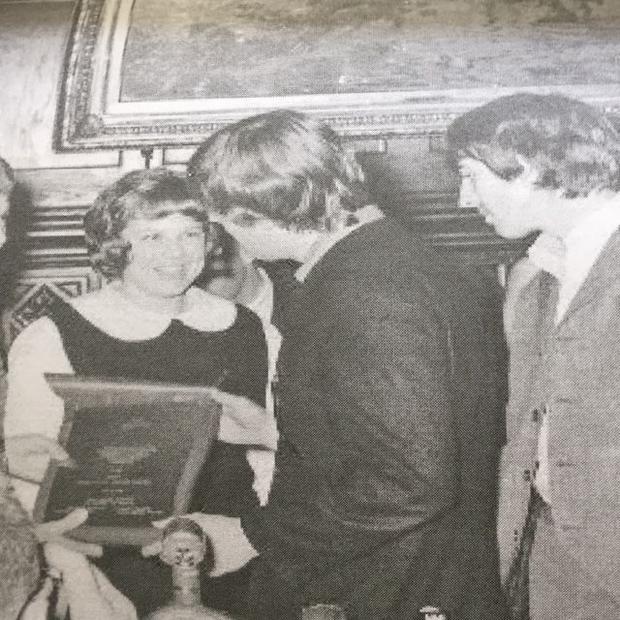 Seen here is Marti Edwards, ecstatic at being able to meet The Beatles at the 1964 press conference held at the banquet room of The Stockyard Inn, just before The Beatles were to go on stage at Chicago’s International Amphitheater.
Courtesy of Marti Edwards
Because of Edwards ability to pull together a fan club, she and the club got the opportunity to meet The Beatles in person when they appeared at the International Amphitheater in Chicago. “Members of our fan club and I were able to attend the 1964 Press Conference (before the performance started),” she said. “I remember not really feeling the emotion until I actually got up close to the stage and the concert began. And, I just got caught up in all the screaming and the intensity, it was overwhelming. And, I remember thinking…but I just met them in person a few moments ago. Yet the emotion, the crowd, the intensity it just pulled me right in and I there I was crying, screaming.”

“One thing the film made me realize,” Edwards said, “was how big the audiences were. And, I am talking about outside the areas and venues where The Beatles appeared. We had crowds here in Chicago, but nothing like what the clips showed —thousands filling the streets to get tickets and so on, it amazed me.”

Coincidentally, Edwards has written a book, entitled “16 in ’64 — The Beatles and The Baby Boomers,” commemorating the year The Beatles performed at the amphitheater in Chicago. “I was 16 then, and as I say, I was determined to meet them.”

Her meeting Joe Carroccio at a party last year, encouraged her to write the book. “When Marti talked about the experience and had photos to prove it, I told her she should write a book,” he said. Since that initial meeting Carroccio and Edwards have become a team. “I have have some experience and a few connections with publishing, so I told Marti we can do this.”

He was quick to clarify that while he helped with the book, “It’s Marti’s story. But I can relate to it very well. We have a lot of similarities,” he said. Both he and Edwards each mentioned growing up in a City; and coming from neighborhoods where there was a diverse mix. Yet, they were also in a similar socio-economic setting in the world that their WWll generation parents help build.

Edwards grew up in Chicago in Park Forest, just south of the city, and Carroccio grew up in Brooklyn, NY. “We were Italian, Irish, Polish, Jewish, African-American, various backgrounds. But we all shared in a common experience of growing up as baby boomers,” said Edwards. “For us a mom was the homemaker and the dad was the main wage-earner. And together the mom and the dad provided a home to raise a family on one salary,” added Carroccio.

“We had no credit cards or bundles of cash at our finger tips, from an ATM. None of us kids did. If we wanted something we had to earn it through an allowance or an after school job or make it, build it ourselves, said Edwards. And the baby boomer kids were very social, we shared a lot in common that way.” 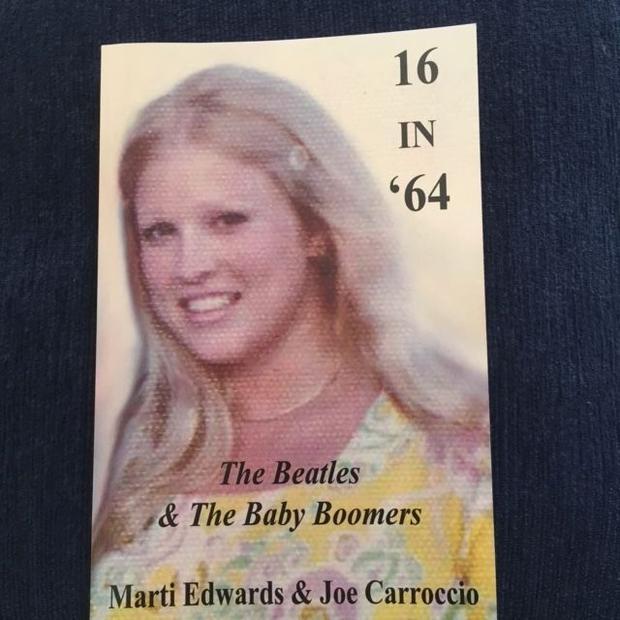 Published in 2015, by Marti Edwards and Joe Carroccio, “16 in ’64” is a very personal memoir and recollection of a special time in American history. Edwards dedicates the book to her parents who gave her the opportunity to accomplish the things she did. And, she and Carroccio dedicate the book to The Baby Boomers generation (who some historians say made Beatlemania happen).
Courtesy of Marti Edwards
Edwards noted that because of the G.I. Bill and the determination of the WWII generation who lived through The Great Depression and World War II to build a life, a new commonwealth of middle class families was emerging. And, like many of her generation and neighborhood where she grew up, Edwards felt blessed to be living in such a well-thought out and planned neighborhood. “I was fortunate enough to grow up in a special community,” she said. “To own a home and to raise a family in a nice neighborhood was something for everyone, not just rich people.” As Edwards remembers it, life during those years was a special time.

This reporter reached out to several historians and scholars on the subject. I asked whether The Beatles shape the times or were they a product of the times? Northwestern University author and speaker Jude Sutherland Kessler had her reflections on the ‘Beatlemania experience and the era. John Lennon once said, ‘We were all in a ship the Sixties — our generation — headed to the New World. And The Beatles were in the crow’s nest of that ship.’ I think that really answers your question best.”

“The Beatles didn’t spring from nothingness,” noted Kessler. “They were products of the world that came before them, the world all around them, and the New World they spied from that vantage point in the crow’s nest. Growing up, they had been surrounded by the heavy back beat and earthy sounds of Irish folk music (as sons of Liverpool, a city fondly known as “The Capital of Ireland”). Then as teens, they craved the primal rock’n’roll of Little Richard, Buddy Holly and of course, Elvis. (John also said, Kessler pointed out, ‘Before Elvis, there was nothing.’)”

Carroccio liked the analogy of The Beatles being in ‘the crow’s nest’ of the ship of the 1960s. “I think they really could sense or see what was coming. The Rolling Stones, sure they are still around, and they are great. But they were not doing what The Beatles were doing,” he said.

Edwards agreed as she added, “That is why I also liked the segments in the documentary about The Beatles in the recording studio at Abbey Road. That to me was really interesting because no one at that time — of the rock bands we knew — were doing that kind of experimenting with sound and different types of musical instruments.”

Carroccio who is a musician, appreciates The Beatles influence, even if ‘Beatlemania’ was just a phase, a fad. “The fact that they all could continue playing at Shea Stadium when they could no longer hear themselves play — the noise was so loud — is really a testament to their ability as musicians. Most accomplished musicians I know will not go on if they can’t hear or make sense of what is being played. Yet, these lads from Liverpool kept playing until the performance was finished. That to me says a lot at how accomplished they were.” Rolling Stone Magazine published a commentary on the now famous concert, commemorating the 50 year anniversary of their performance at the stadium. And, yes the ‘Fab Four made one of their finest, and overlooked recordings’ (on film); clips of which are included in the Ron Howard documentary.

Yet, getting back to what Edwards had said about the times and about being part of the baby boomer generation, Carroccio said. “I agree with Marti that The Beatles were a phenomenon to us here in the U.S. because there was so much happening around us. The Civil Rights movement, the Cold War, a growing concern about poverty and so on.”

No doubt the collective tragedy of the assignation of President John F. Kennedy had an impact and that the arrival of The Beatles was a way for the youth to deal with that national loss. “But one thing that I ponder often is the fact that our parents simply wanted us to live in a stable home and lead a good life. Our parents made it clear to us that we could achieve anything if we set our mind to it,” said Edwards. “The tenacity, confidence, that is what helped us to succeed. I just knew I could make the fan club and meeting The Beatles in person happen and it did.”

And Carroccio then added. technology is a marvel. But there is something to be said about the WWII generation that raised us baby boomers. Think about it, he said, All the men who served in WWII, all they wanted to to was get back home and raise a family. They had just liberated all of Europe and stopped Imperialist expansion and unrest in Asia. They were heroes. Yet, their most important goal besides rebuilding a war-torn world was getting home and raising a family. The G.I Bill expressed that, I think, he said. There was a cohesiveness of that time and the Post-WWII era, which seems to be lacking and has not been since.” 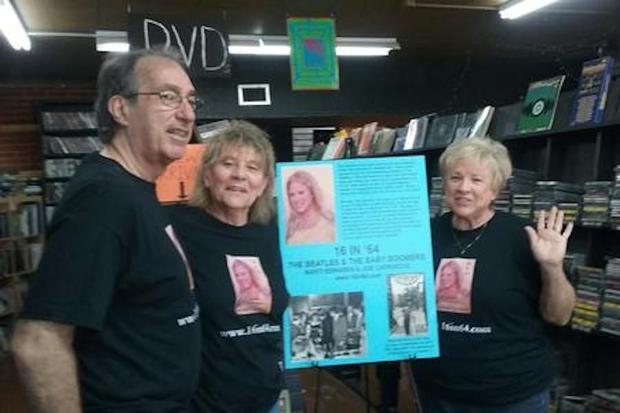 Marti Edwards and Joe Carroccio at Revolver Records promoting the book in Phoenix this past July of 2016.
Courtesy of Marti Edwards
Edwards is grateful for The Beatles influence, and is amazed at how their music still holds up to this day. “Joe and I were able to get our book together in just three months; it just flowed.” she said.
Both she and Carroccio believe the book can easily become a film. Meanwhile, she and Carroccio are promoting the book with book signings at various locations, like Revolver Records in Phoenix, book stores and music shops. For more information both “16 in 64 – The Beatles & The Baby Boomers by Marti Edwards and Joe Carroccio, visit the “16 in ’64” web site.
In this article:16 in 64, 1964, Beatlemania, Chicago, Joe Carroccio, Marti Edwards, The beatles