Both, the San Francisco Chronicle and the SF Examiner have reported on this controversy that remains unresolved at this time. It calls into question how much right does a property owner have? And it puts into question how much those rights and privileges get safeguarded or not. This reporter was first alerted about this situation back in November of last year. But the situation goes back even farther.

A widow who has lived at Montclair Terrace, for decades wants to keep a tree growing in her own back yard. Sounds simple enough. But its not! Because the tree is 96-feet tall and growing, neighbors are concerned about safety.

The tree is on private private property and technically, the woman can provide for the care of the tree as long as it’s branches and roots do not touch or interfere with adjacent properties. Yet, what has two neighborhood associations most upset is the fact that the widow is petitioning the City of San Francisco to grant her tree ‘landmark status.’ Once declared a landmark tree, it can’t be removed without a permit. And, a permit can only be issued if it is proven the tree is in poor health and must be taken down. According to one arborist report, the tree is healthy and poses no risk. But others, hired by opponents of the tree differ.
One of California’s enduring natives a majestic Redwood can reach over 30 stories high, say the ‘Save The Sequoias League’ with considerable width at over 31 feet and weigh over 640 tons. Scientists have recorded that Redwood trees can live to be over 1,200 years old.
Even with that impressive statistic, and the fact that there are many giant trees doing just fine amid densely populated areas, opponents to the tree at Montclair Terrace say it is a hazard.
I talked with Mei Ling Hui of the Urban Forest and Agriculture division of the San Francisco Department of The Environment. She verified that an application for landmark status was submitted. But that it is a lengthy process. “The Urban Forest Council doesn’t make the final decision, “said Hui. “The council can only recommend it. The final decision is voted on before the Board of Supervisors.” 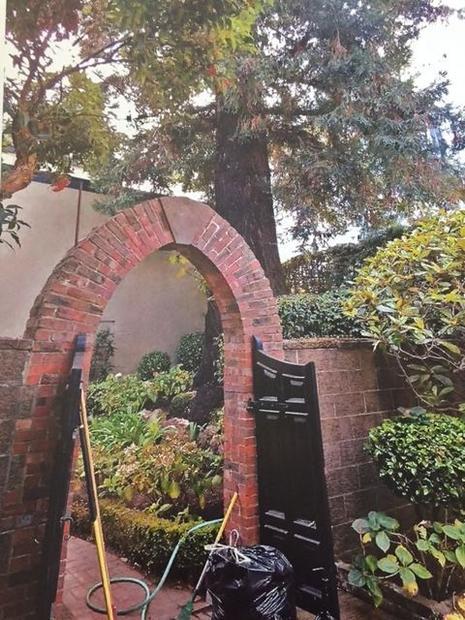 The tree in question is on the property of one homeowner who wants to ensure the 96-foot tree continues to grow in honor of her late husband who died over 54 years ago.
Courtesy of Roy Leggitt, tree specialist

So far the tree’s recommendation for landmark status has been stalled and last night’s hearing at City Hall was one of several attempts. The Montclair Terrace Association claims the process so far did not follow proper notification and therefor is in violation of ‘The Brown Act.’ SF Dept. of The Environment has taken that into consideration.

Hui verified that City officials have been very ethical and have worked hard to do everything in accordance with regulations, established procedures and protocols. “The Urban Forest Council did accept staff recommendations to vacate the current process, (out of respect for the complaint) establish a new process, and hear (again the issues about) the tree at their next meeting. Five UFC members who have not yet seen the tree will perform site evaluations,” she said. “Then later this March, the UFC will hear discussion of the tree for determination on their recommendation to the Board of Supervisors. After the UFC makes that determination… UFC staff will forward the UFC’s findings to the Board of Supervisors for final determination on landmark status.”
Some people who opposed the tree, vented their feelings at previous hearings like the one on Dec. 9. Some said that the tree is “one woman’s wishes” without the consent or discussion with neighbors. Documentation available to the public through the City’s web site shows notice was given.
But to make things even more complicated, the woman’s attorney Matthew Gluck, noted that a member of one of the neighborhood groups opposing the tree obtained “light, air and view easements.” The neighbor convinced the widow to sign an agreement. The widow signed the agreement without her legal council present. Gluck alerted the SF Urban Forestry Council and the Board of Supervisors that the man, a recent neighbor as of 2015, showed up at the widow’s home with his lawyer and a notary.
Gluck pointed out in a formal letter delivered to SF Urban Forestry Council and the Board of Supervisors, that “conduct (such as this) demonstrates…that opposition is based solely on the neighbors’ desire to safeguard their (scenic) views in ways that SF Building and Planning codes do not require. Opponents have failed to specify any ‘major public consequences’ from the tree being given this status…because as he said, there are none.”

When I asked if any funds have been set aside by the widow for the tree, Gluck was not at liberty to say. When I asked Gluck if after all this effort, and landmark status is granted, what if new owners of the property, through some sort of appeal, get to take the tree down? “Of course,” he said, “it would be frustrating and a disappointment.” But as Gluck pointed out. “Regardless of whether or not a tree has a landmark status it is still a property owners responsibility to care for a tree. ” For as Gluck sees it all the widow is doing by seeking landmark status, is protecting her tree. “In this case…he noted, justice delayed truly may turn out to be justice denied.” He and supporters remain hopeful. The Urban Forest Council will discuss the merits of the Coastal Redwood tree at their next hearing, scheduled for Friday, March 24th at City Hall at 8:30 AM.
To learn more about the situation with this now famous Coastal Redwood growing near Lombard Street — “the crookedest street” and the efforts to save it, visit the tree’s supporters’ web site. Or visit the special page dedicated to the tree on Facebook.