Yet, “Back To The Picture” Framing & Art Gallery in San Francisco’s Mission District did not shy away as it held its Opening Reception on Sept. 17, to feature the work of six artists expressing the human form in “A Passion For The Figure” exhibit now on display. All six artists: Catherine Merrill, Fernando Reyes, Michael Ruiz, Tsungwei Moo, Stephen Namara and Julie Marsh were present that evening. “Over 100 people showed up, I am pretty certain,” Merrill said, “because, the gallery space was full of people the entire time from 7:00 to 10:00 p.m. Lots of people lingered which to me, made it seem more like a party with lots of friends, colleagues and family members.” 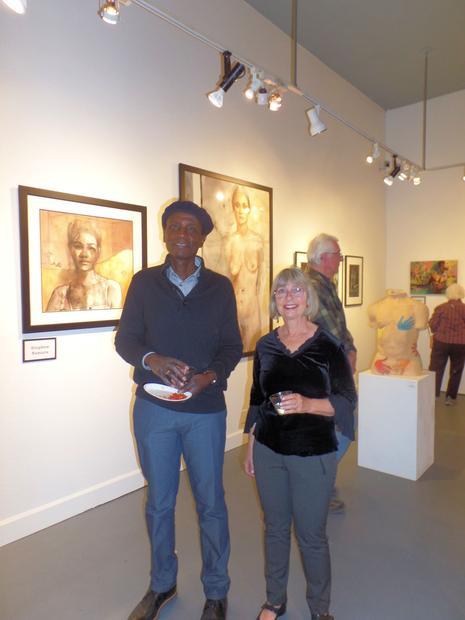 Artists Julie Marsh and Stephen Namara (originally from Kenya), were among the six artists featured that evening.
Derek Hargrove

Describing the opening as “lively, animated and a wonderful opportunity to make connections,” Merrill was very pleased to say, “I sold two of my pieces before the start of the reception, how wonderful is that!” She praised the work and craftsmanship of her fellow artists who share the spotlight with her at the “Back To The Picture” gallery. “I am amid artists, displaying works that are most impressive,” she added.
The theme of the exhibit centers around depicting the “Beauty, Strength and Sensuality of the Human Form.” Merrill had to balance between being a featured artist and a curator. She is one of the driving forces behind putting together the exhibit and highlighting the talents of fellow artists. 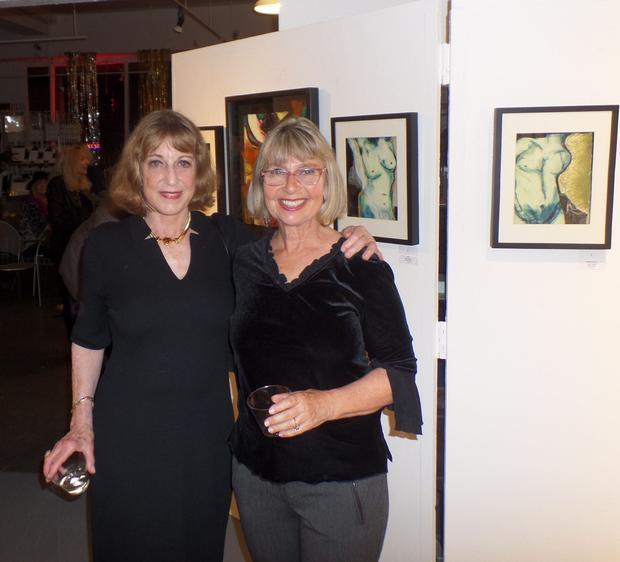 Artists Catherine Merrill and Julie Marsh were among the six artists feature at “Back To The Picture Gallery” in the Mission District for the exhibit entitled “A Passion For The Figure.”
Derek Hargrove

“Catherine has been very good about putting this exhibit for us here at “Back To The Picture,” said manager Derek Hargrove. “She served a as coordinator and art selection committee member as what the theme/ focus will be for the showing.”

‘Back To The Picture’ has three locations, two in the Mission and one in the South Of Market (SOMA) area. “It is to our advantage as a framing shop to be able to provide gallery space and have shows like this,” Hargrove added.

Merrill also noted that by having events like this frequently, “all the various social circles of the local art scene come together, its fascinating.” Taking the time to talk about all who were there at the reception, she shared some of the photos that were taken. 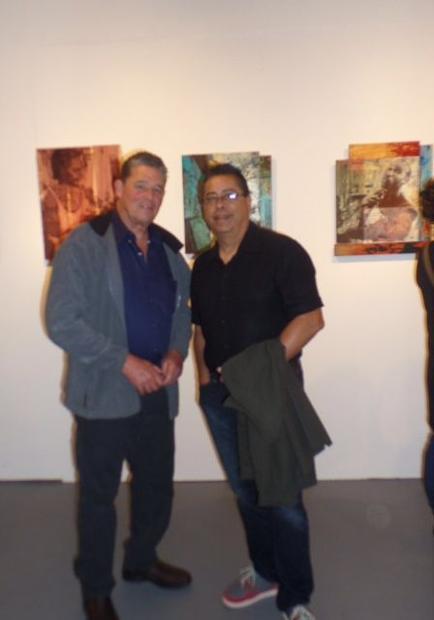 “Fred Kling is both an artist and an instructor at City College of San Francisco,” said ceramic artist and painter Catherine Merrill. To the right of Fred Kling in the photo is Fernando Reyes, painter and exhibiting artist at the gallery. “These events and exhibits bring many people together, especially people from all the various circles of the art scene in San Francisco and surrounding areas.” She also mentioned how many within these circles have known each other for decades.
Derek Hargrove

Art can happen anywhere. Yet as she noted, “when you have a place like San Francisco where there is a greater diversity of people and ideas, a much larger and deeper aspect of art emerges.”

Artist and art instructor at City College of San Francisco Fred Kling was in attendance that evening. And like many who love art and make it part of daily life, he brings art into the world. Or as some might say, he brings people to art. This is something Merrill believes in very strongly and the artist/curator was pleased that Kling was there. As reported by the Glen Park News back in 2011, Kling takes students on a field trip to get a sense of ‘Plein Air’ painting. Whether it is a morning class held at Glen Canyon, or having students sketch scenes at Lands End near Ocean Beach or at Stow Lake in Golden Gate Park, Kling believes in bringing art to the people and people to the art.
Kling is a colleague and good friends with Michael Ruiz, as Merrill explained. “Mike Ruiz is a painter, sculptor and illustrator. His work has been shown throughout the Bay Area. He is a graduate of San Francisco State University majoring in Art and Design. Ruiz has also done graduate work at the College of Arts and Crafts and San Jose State University. After graduation, she said, he moved to New York City where he worked as a graphic artist before returning to San Francisco and landing a teaching position at City College of San Francisco.” 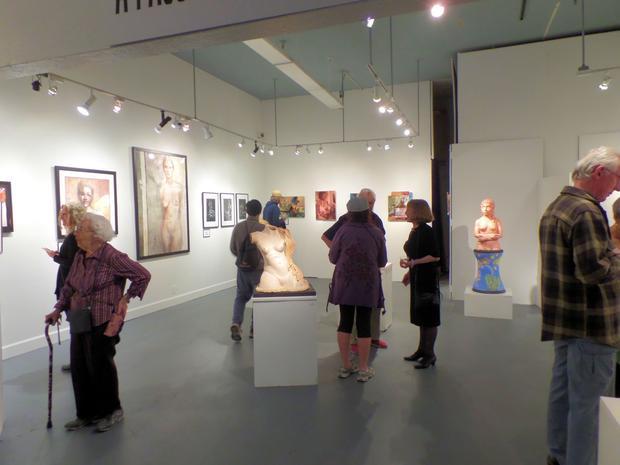 “A Passion For The Figure” exhibit had a well attended opening reception on Saturday evening, Sept. 17, 2016.
Derek Hargrove

“Making and maintaining connections is important and it takes work,” said Merrill. When asked if she had heard of the exhibit/reception held at Art Explosion this past weekend on Sept. 23, she stopped for a moment. And, then she said, “Art Explosion! Oh my, yes, I used to go there some time ago. It has been a while. I know that place, its an artists’ collective. I have to get reacquainted.” 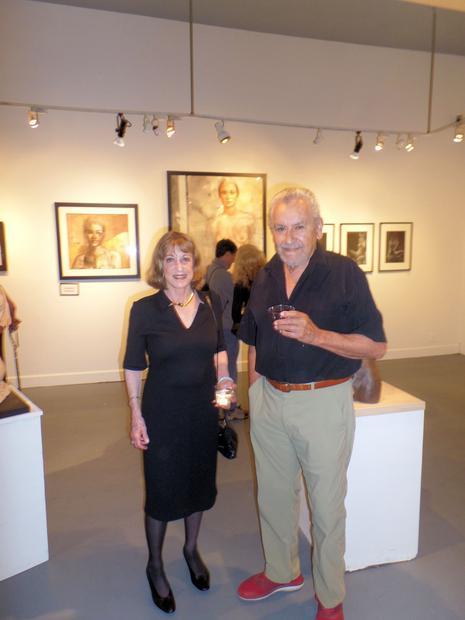 Seen here is Catherine Merrill and Michael Ruiz at the opening on Sept. 17. “Michael served for six years as Chairman of the Art Department at City College before retirement, said Merrill. He is now a board member of Acción Latina, a nonprofit organization promoting culture and civic empowerment to the community. He helped design the new 24th Street Juan Fuentes Art Gallery, she added. And, Mike was honored to have a permanent installation of his Maya sculpted replicas on the façade of the bu
Derek Hargrove of “Back To The Picture” framing and art gallery

Her only lament as she mentioned to this reporter before is that San Francisco like many places, is pushing artists out as the quest for development and upscale luxury continues to skyrocket. “Finding affordable venues to showcase art or to work as an artist in a studio is getting harder and harder these days.” 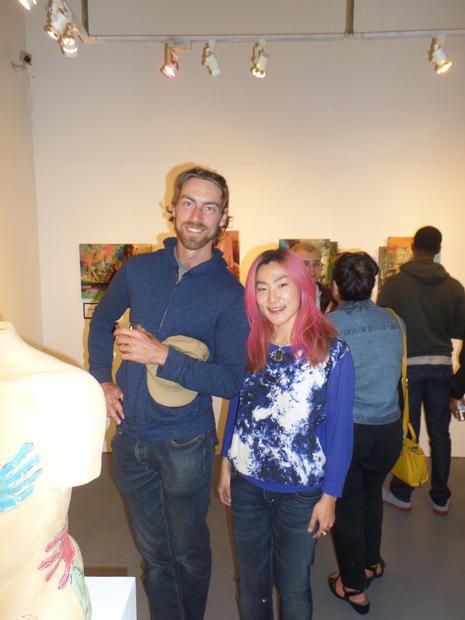 Tsungwei Moo was among the six artists spotlighted at the “A Passion For The Figure” exhibit. Seen here with a friend, she invited friends and other fellow artists.
Derek Hargrove

Even with setbacks, Merrill like other artists believes the best way to confront gentrification is for the local community to support the arts.
When asked if she has ever encountered any reluctance or fear with regards to the subject matter of her art, Merrill responds, “There is no shame in the human form. Art is where we can better understand and express that which is part of us all. We are all on this earth in physical bodies, there is no escaping that fact.” 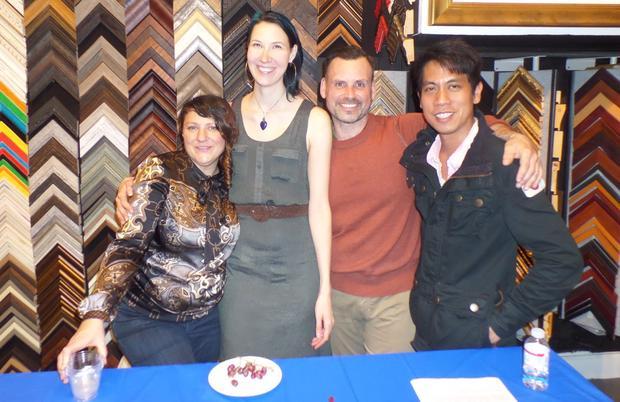 “Back To The Picture” framing and art gallery manager Derek Hargrove (at center) with his fellow staff/crew worked to help make the opening reception of the exhibit that Saturday evening a success.
Derek Hargrove

As to what constitutes “good taste” in art and what is deemed appropriate artistic expression, that can spark another debate entirely. Yet, this reporter was curious as to whether or not people are more or less inclined to buy art regarding the human form. “That is really hard to say,” said art consultant and appraiser, Alan Bamberger. “Selling a commodity that’s generally expensive and serves no practical purpose is anything but easy,” he said. While he was not able to attend the opening reception, he is acquainted with “Back To The Picture” gallery. “I try to attend as many exhibits, showings and events as possible. But, he said, I am only one person and the art scene in San Francisco (or anywhere) is much, much larger than me.”
He agreed with Merrill about the work involved. As Bamberger pointed out, the work that both the artists and a gallery must do is a collaborative one. Bamberger has been covering the art scene for many years and what he knows is that art can be unpredictable. But that no matter what it takes work. 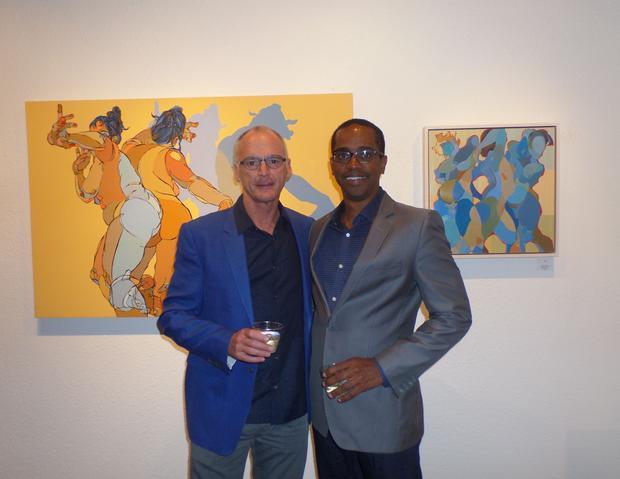 Patrons and visitors were impressed by the array of works displayed, like paintings by artist Fernando Reyes, seen in the background here.
Derek Hargrove

Merrill and artists like her are undaunted despite the obstacles they face, such as rising costs and the lack of readily available/affordable venue space. “I am just so honored and pleased to be able to do what I do, she said. And, again to be in the company of such accomplished artists with extraordinary work, that for me is ultimate.”

For more information about artist Catherine Merrill and her work featured at “A Passion for The Figure” visit her web site. The exhibit will continue to show at “Back To The Picture” framing and art gallery until October 16.

In this article:A Passion for The Figure, Back To The Picture, California, Catherine Merrill, Mission District, San Francisco