Local band The Sound Dunes has a dedicated fanbase that catches their music every time they play the pubs, such as Abby Tavern on Geary Blvd, at 5th Ave in San Francisco’s Richmond District, not far from Golden Gate Park.

The tradition of everyone (whether Irish or not) going out to eat some corned beef with cabbage and a lot of something to drink on St. Patrick’s Day is customary. While many in the City will make a trek downtown to the venerable Harrington’s, there are plenty of pubs and taverns in Richmond District to fill many a glass and accommodate the revelers. Adjacent to the Richmond is The Sunset District. It too has pubs such as the long-standing The Little Shamrock on Lincoln Way and 9th Ave. No doubt the days of the Irish being among the predominant population of the middle class of San Francisco are long gone. Remnants of what they built and left behind still exist in what is known today as “The Sports Bar.”

Without getting too wrapped up in history, the Irish, like the Italians and so many other immigrant groups that came to America in the 19th and early 20th Centuries are what built American cities like San Francisco. Very working-class-minded and eager to build a new life, pubs, along with cultural centers and dance halls, were the place where working people gathered. Live music was and still is part of that place.

Even with the recent influx of a high tech culture in the past 15 years overtaking the haunts of what once was a working class area, a pub is where sports, music and people mix. St. Paddy’s Day is perhaps one of the busiest if not the busiest day of the year for a pub.

And, believe it or not, for all the reference to “wearing of the green,” “Erin go Braugh” and looking for four-leaf clovers amid shamrocks, the annual celebration is actually an American holiday. It is commemorated in Ireland. But the Irish in America during the 20th Century made St. Patrick’s Day into what it is today with parades, festivals and lots of green accessories.

While on assignment for the Richmond Review, this reporter spoke to Dermot Coll, manager of Abby Tavern. He said the Sound Dunes have performed at the tavern over half a dozen times. “The response has been good… mostly people in the middle-age group bracket. The Sound Dunes are among the better local bands. People like them,” said Coll, “and they draw a good crowd.”

The Sound Dunes were at ‘the Abby’ (as Coll refers to it) this past December and Coll noted “everyone enjoyed the music and had a good time.”

Among the six in the band, is Jim Russo, the drummer. He is a Sunset District man who lives ‘out in the Avenues’ with his wife. His home and office on 22nd Ave is unassuming. Yet his dedication to music is such that Russo built a sound-proof studio-practice room in his basement. He and the Sound Dunes practice there frequently.

A man of many talents, Russo is a CPA by profession. Still, he considers music more than a hobby. “I’ve been playing drums since I was 15,” noted Russo. 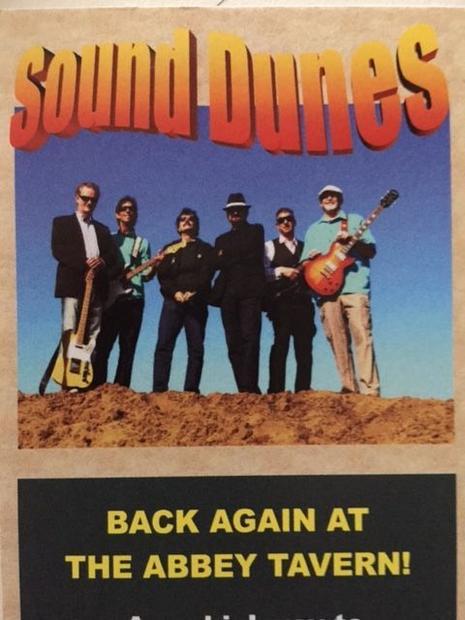 A local band with a following, The Sound Dunes often play at San Francisco’s Abby Tavern in the Richmond District on Geary Blvd.
Courtesy of The Sound Dunes
Advertisement. Scroll to continue reading.

The hexad band plays mostly ’60s, ’70s and ’80s music. “Four of us sing, including me,” he said. “And I have even written and performed a few songs of my own.” added Russo. This past Dec. 17 at Abby Tavern he performed three of his own songs.
A man who invests well, especially of his time and efforts, Russo leads a very productive life.

When Russo is not working with clients as CPA, he is in the yard gardening. And if he is not gardening then he is bicycling around Golden Gate Park or taking a ride out to Ocean Beach with his classic MGB roadster.

Being part of the Sound Dunes is another cherished facet of his productive life. It provides him with a creative outlet that helps him and his fellow band members to release the “inner-rock star” that appreciates good music and a receptive audience.

Abby Tavern is a full-service sports bar with an extensive selection of draught and bottled beers, hard liquor and mixed drinks. It will be open on St. Patrick’s Day. To find out more visit the Abby Tavern web site or call 415-221-7767.