Since its initial release, the movie has been shown in selected cities across America. He is pleased that the movie is making strides and placing a lesser-elevated sport into the spotlight.
“I am simply a fan of wrestling,” said the Chicago native. He mentioned to this reporter how after learning about the little-known history of Iranian wrestling and its ancient Persian roots he wanted to learn more. There are other Persian wrestlers who came to America, such as Kazem Gholami. In fact, he and others are still involved in the sport in some way, either by coaching or sponsoring a team or event. Gholami in press interviews has mentioned the delicate situation wrestling is in with regards to the International Olympic Committee and its decision to drop it from the upcoming 2020 Olympiad.
“I knew of the ancient roots of wrestling,” said Blake, “even before this movie came out. It is a subject that is fascinating to me and over the years, I have gathered a lot of information and met interesting people.”
It is from this and his love of the sport that his documentary film was envisioned and made. “The title of my documentary is called Pahlavan. The word means strong or champion. And it is used to describe one style or type of wrestling in the Persian region.”

Professor Houchang Chehabi is an archivist at Boston University, and he is among the many people Blake has befriended while pursuing the subject and putting together the documentary.

As a sport, wrestling is perhaps one of the oldest, if not the oldest sport, in all of human history. It was at the very first Olympic games of ancient Greece. And, according to Chehabi and other historians, wrestling goes back even farther. But for Blake’s documentary the focus is more contemporary.

Blake is familiar with American wrestling. He has been at the last two Olympics. More than simply a fan, Blake elaborated. “To add more context to my background I wrestled for the University of Minnesota and I worked for FloWrestling out of Austin, TX.” He has been following the sport of professional wrestling, even when it reached a critical negative point. “I interviewed and spoke with Bennett Miller – the director of the 2015 movie ‘Foxcather’,” said Blake.

“Wrestling as a professional sport is small,” he said. “And, because of wrestling’s small and localized appeal… it is not high profile. There is a part of it that appeals to the working class.” Speaking in reference to the 2014 movie ‘Foxcatcher’ which examines the difficult and bizarre situation surrounding a tragic sporting story that took place 20 years ago, Blake said. “This made the sport of pro wrestling an easy target to dominate for the likes of eccentric millionaire John du Pont. This was pointed out almost immediately at the time by San Francisco sports columnist Gwen Knapp. It’s very sad what happened there back (at the duPont Foxcatcher wrestling training compound in Pennsylvania) in the 1990s; with the death of wrestling gold medalist Dave Schultz,” he said. “But the sport lives on despite its profile in American sports.” 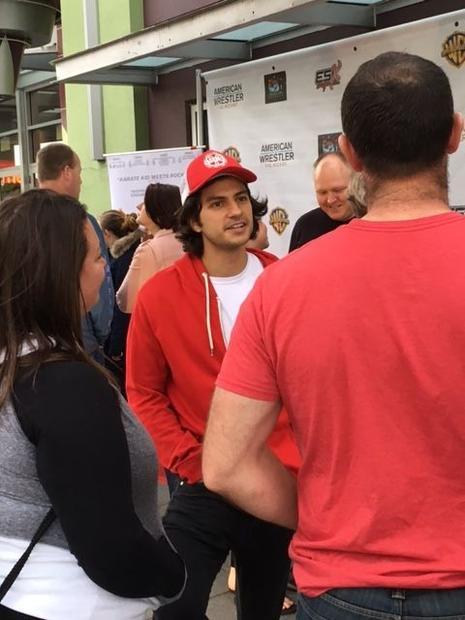 George Kosturos, the actor who portrays the lead character in the film “American Wrestler-The Wizard” talked with movie-goers that night of the local premiere on May 5 2017 in Petaluma. The sold-out turn out for the film gives witness to the popularity of not only the film but of wrestling itself. Documentary filmmaker Ryan Blake liked “American Wrestler – The Wizard” as it has been playing in selected cities throughout the U.S. Blake hopes his film will also be as well-recieved when it premiere
Jonathan Farrell
Advertisement. Scroll to continue reading.
When I mentioned the rise in popularity of MMA (Mixed Martial Arts) sports, and aspects of it that incorporate wrestling, he agreed, saying, “yeah, MMA is massive! MMA has done a lot to advance professional wresting in the spotlight.” Even if critics point out that MMA is not the same as professional wrestling, just the fact that some form of wrestling is gaining (excuse the pun) ‘a foot hold’ is seen by Blake and others as a good thing. “But in the minds of most people,” said Blake, “wrestling as a sport pretty-much is WWF, which lends itself as a performance of spectacle and of farce.” 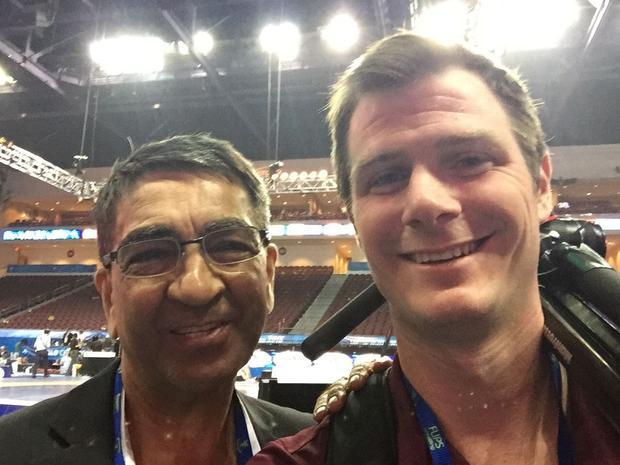 “Here is a photo of myself (at right) with our documentary subject, Jahangir Golestan-Parast (left) at the 2015 UWW World Championships,” said wrestling fan-turned documentary filmmaker, Ryan Blake. The Chicago-native hopes to have his film released next year.
Courtesy of Ryan Blake
Blake noticed as he became more acquainted with the various circles of wrestlers he met, that there was a bond between the teams and associations. “Iranians at their best, stand out among them all. If you go to ‘the little Tehran’ section of LA, the bond there is unique, between teammates, teams and audiences — it’s amazing,” he said.
Advertisement. Scroll to continue reading.

Even with its lackluster image when compared to American football, basketball, baseball and just recently soccer, pro wresting has a life-force all its own. This is especially so for Iranians. But like in the movie “American Wrestler – The Wizard” the political climate places a hindrance upon the sport.

Political upheaval no matter what country can cause great distress and prevent nations as well as individual teams and athletes from competing. “The recent travel ban imposed by the Trump Administration is an example,” said Blake.

Even in places where a sport used to be played/practiced freely, a change in political climate or governmental regime can hamper its very existence. Such is the situation in Iran. As a result of the 1979 revolution, women have been prohibited from sporting events such as football matches. Wrestling clubs and schools like everything else in that theocracy are subject to strict governmental restrictions.

“Wrestling used to be the most popular sport in Iran,” said Prof. Chehabi, “until about the 1960s, when it was overtaken by soccer and karate/taekwondo. There used to be many regional styles, up to 30, but most are no longer practiced. The ‘ancient’ nation-wide (as opposed to regional) style of wrestling was quite similar freestyle, and so when freestyle wrestling was introduced to Iran in the 1930s many wrestlers just switched to the international style and Iranians started winning medals.

“When Iranians started emigrating in large numbers in the 1980s because of the Islamic revolution, obviously there were men among these emigrants who took their skills to their new homes and passed their enthusiasm on to their offspring. That’s why we now have wrestlers of Iranian heritage not only in the U.S. but also in the U.K., in Germany, the Netherlands, and elsewhere.”

Gholamreza Takhti was the most famous wrestler in contemporary Iranian history. He won his first championship in 1950 and from there he went on to the Olympics in Helsinki in 1952. He was a gold medal winner. In 1968, he was found dead in his hotel room. Officials ruled it as a suicide. Others claim he was murdered because of his political activism in favor of deposed elected president Mossadegh and his membership in a group that was against the Shah.

Despite the popularity of a sport or of an athlete, politics can overshadow. In his book “The Games: A Global History of The Olympics” sports writer and sociologist David Goldblatt, explains that sports (in an event like the Olympics) is often used in political ambitions of nations, regimes and social movements and propaganda.

Blake believes as many do that any sport if played fair and well brings out the best in people. And it is this shared appreciation of it that helps form camaraderie and friendship, bringing people together rather than pulling them down. 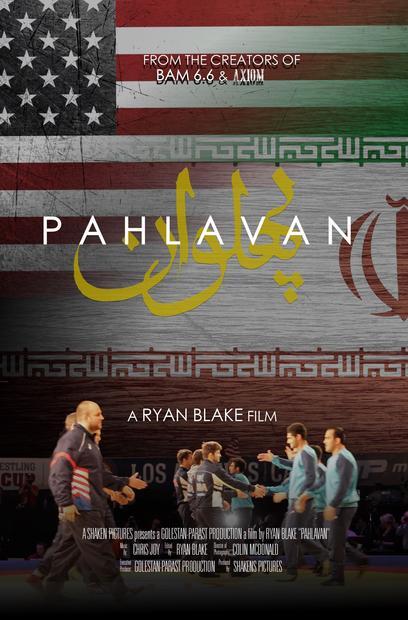 “Pahlavan” is the documentary film that wrestler-turned-filmmaker Ryan Blake has just completed. Working on post-production tasks, he hopes to have it released sometime next year. It is the compilation of interviews and research he has conducted and features the unique qualities and history of professional wrestling in the United States; while highlighting the Iranian-Persian influence that has been a part of American pro wresting for over 50 years.
Courtesy of Ryan Blake
He hopes his documentary when released next year will bring people together. And, illustrate how much the sport with its long and ancient history is treasured in Iran — and elsewhere. And, hopefully the International Olympic Committee will reinstate the competitions for the 2020 Olympiad. As of right now, a website is under construction, but to learn more about the upcoming release of the documentary film Pahlavan, visit wrestler-turned-filmmaker, Ryan Blake’s page on Facebook.
Advertisement. Scroll to continue reading.
In this article:American Wrestler The Wizard, Chicago, Iran, Olympics, Persian history, USA wrestling