Government data shows 69,550 migrant children were held in U.S. government custody over the past year, enough infants, toddlers, kids, and teens to overflow a typical NFL stadium, according to the Associated Press.

This unprecedented number of children detained in the U.S. is more than any other country, according to United Nations researchers. The really sad part is that the U.S. government has acknowledged that being held in detention can be “traumatic for children, putting them at risk of long-term physical and emotional damage.”

There are still about 4,000 immigrant children being detained in the U.S. The rest have been deported back to their home countries, while some have been reunited with family members in the U.S. The number of children held by the government in fiscal 2019 was up 42 percent from fiscal 2018, according to the AP.

NBC News is reporting this story is part of an ongoing joint investigation between The Associated Press and the PBS series FRONTLINE on the treatment of migrant children, which includes the film “Kids Caught in the Crackdown” premiering on PBS and online Nov. 12 at 10 p.m. EST/9 p.m. CST. 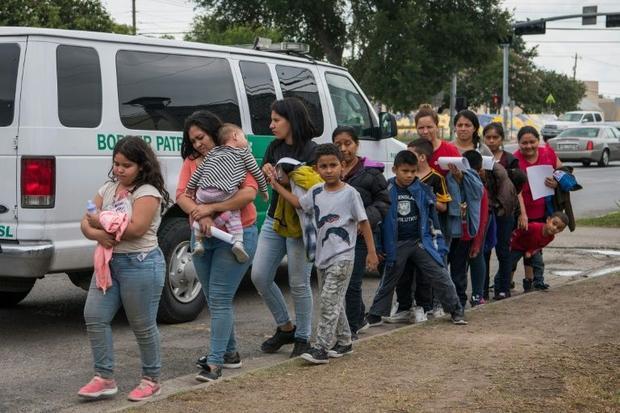 “Early experiences are literally built into our brains and bodies,” says Dr. Jack Shonkoff, who directs Harvard University’s Center on the Developing Child. Earlier this year, he told Congress that “decades of peer-reviewed research” shows that detaining kids away from parents or primary caregivers is bad for their health. It’s a brain-wiring issue, he said.

“Stable and responsive relationships promote healthy brain architecture,” Shonkoff said. “If these relationships are disrupted, young children are hit by the double whammy of a brain that is deprived of the positive stimulation it needs and assaulted by a stress response that disrupts its developing circuitry.”

A September report from an internal government watchdog found that facilities holding migrant children “struggled to address the mental health needs of children who had experienced intense trauma and had difficulty accessing specialized treatment for children who needed it.”

To make matters worse, children traumatized after detention in the U.S. are being sent back to countries where mental health clinicians are in short supply.