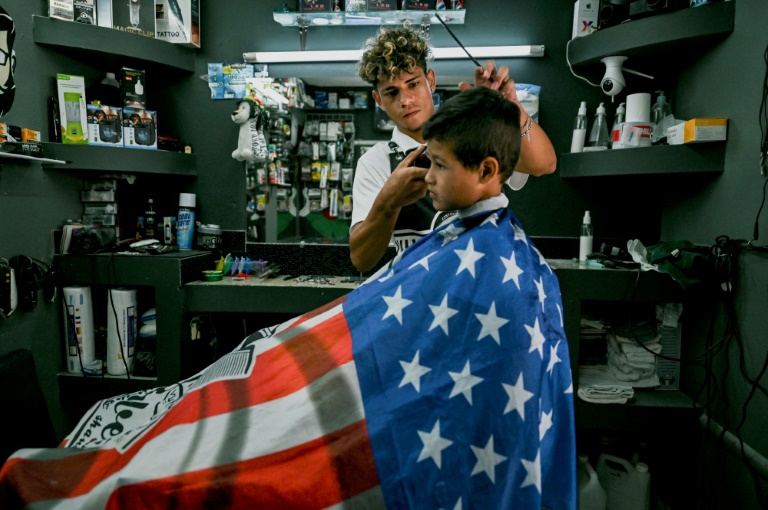 Wilmer Rodriguez’s mother, Lesly Madariaga, spent a sleepless night looking for him in the streets of Nueva Suyapa, a poor neighborhood in the hills surrounding the Honduran capital Tegucigalpa.

But to no avail: like thousands of other young Hondurans trying to reach the United States in search of work, Rodriguez and a friend had stolen away in secret.

It was February 2020 but a month later he was back home.

Rodriguez, then 17, only got to Mexico before he was picked up by authorities and returned to Honduras.

“I want to go again, I still have the desire and it won’t leave my head until I pull it off,” Rodriguez told AFP.

“If they catch me one, two, three, four, five times again I’ll still keep trying because my dream is to support my family.”

In a country suffering from deep economic woes and rampant violence, and where more than half the population of 10 million lives in poverty, thousands expose themselves to the many risks of migration, not least from human traffickers and extortionists.

It can be a costly and fruitless exercise.

According to a recent report, Central American migrants spend around $2.2 billion a year trying to reach the US, most of which is paid to traffickers.

Around 50,000 Honduran migrants have been sent back home this year alone, according to official figures.

Hondurans will head to the polls Sunday to elect a successor to President Juan Orlando Hernandez.

After 12 years of right-wing Nationalist Party hegemony, some see in leftist former first lady Xiomara Castro an opportunity for change.

But not Rodriguez. No matter who wins, his dream will remain resolute.

“I don’t have much faith in politicians because the truth is, they’re all liars,” he said.

Now 18, he puts his faith instead in his ability to become “one of the great” barbers of the world — in the United States.

Upon his return to Honduras, Rodriguez trained to cut hair and is now employed in his neighborhood’s La Bendicion salon.

He has already won a pair of awards for his work.

In La Bendicion, the barber capes feature the US Stars and Stripes — if ever Rodriguez needed more encouragement.

He has not told his mother as much, but she suspects he again will seek to reach the US.

She believes “God always provides food,” but knows that is not enough for today’s dreamers.

“The youngsters leave for a better life because there is no work here in Honduras.”

There are two types of homes on the steep unpaved streets of Nueva Supaya: sturdy ones built of concrete blocks, whose owners have family abroad, and flimsy ones made of wooden or metal planks.

Rodriguez’s house measures no more than 20 square meters (215 square feet) but a dozen family members are crammed into its two rooms.

In the bedroom, blankets provide makeshift dividing walls. Rodriguez sleeps atop a bunk bed, his mother and sister below.

He earns money now, but not enough.

Still, he is determined not to fall into the trap that has seduced many others: gangs.

Like many Honduran neighborhoods, Nueva Suyapa is beset by the curse of the Mara Salvatrucha (MS-13) and Barrio 18 gangs whose drug-trafficking and extortion-related violence force many young people to flee the country.

Local non-governmental groups run programs trying to keep youths out of harm’s way, and at home. But the lure from abroad is powerful.

“When children become youngsters they want to leave for other countries to look for better opportunities because here there are none,” said Rosa Maria Nieto, executive director of the Sharing Association.

“It creates great pain and suffering in families.”

Rodriguez says neighborhood younths are attracted to crime and “easy things” like selling drugs, although Rodriguez has always resisted.

“My goal is to work…. My house is my goal too. I know that one day I will build it.”