The flu has been associated with 15 pediatric deaths, seven of them being reported in the week ending January 28, according to the Centers for Disease Control and Prevention (CDC).

The latest report (PDF) issued by the CDC shows that the most prevalent subtype of flu being reported was influenza A (H3N2). There have been over 12,000 flu cases reported across the country, with 51 out of 54 states and territories experiencing elevated levels of flu and flu-like activity. The Virgin Islands is reporting no activity. 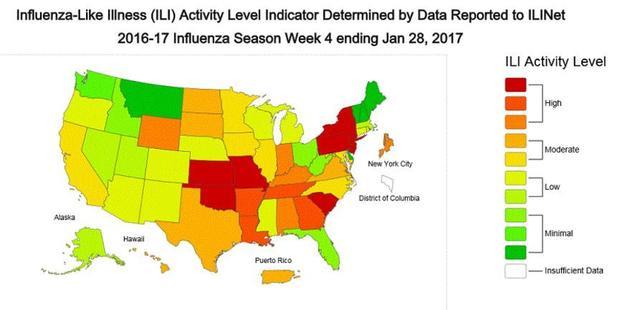 Dr. David Topham, director of respiratory pathogens at the University of Rochester says, “It looks like it is picking up again, which is pretty typical during this time of year, especially when all the schools and colleges, in particular, go back in session.”

The CDC and health care providers continue to emphasize the importance of getting the flu vaccine, pointing out that it is still not too late to be vaccinated to protect yourself and others. “With the flu season that’s going on right now, it is not too late for a vaccine,” said Dr. James Steinberg, chief medical officer at Emory Healthcare.