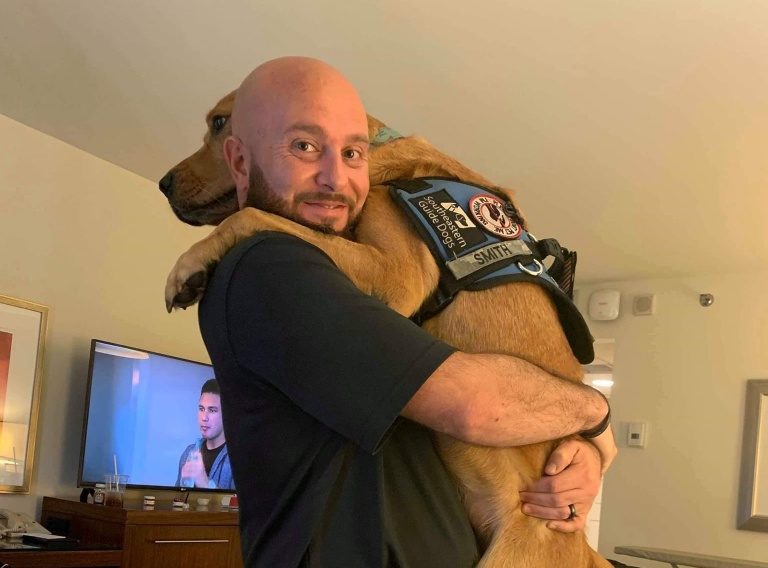 Florida army vet and musician Russell Smith finds his calling in life thanks to his trumpet, which is a part of his story, and the Southeastern Guide Dogs.

He served eight years in the United States Army, and he went on to suffer PTSD. He described his experience with the Southeastern Guide Dogs as “mindblowing.” “I got here and I didn’t know what to expect,” he said. “It has been amazing: top-notch facilities, top-notch trainers and dogs. I couldn’t ask for a better place to get my service dog Mustang.”

“Southeastern Guide Dogs and Mustang saved my life,” he said. “I was in a very dark place. I was living in my parent’s basement and I was a recluse. I was sitting in their basement deteriorating away. I was overeating, overdrinking and overmedicating. When I met a veteran with his service dog and how it helped him, I knew I had to apply. Literally, the day I met Mustang, it changed my life.”

Smith noted that he had been looking for a year to get a service dog. “My anxiety attacks started getting more severe and frequent and I decided that it was time,” he said and stated that Mustang has transformed his life for the better.

The haunting sound of Taps escorts a fallen soldier to his final rest. And Russell Smith played it too many times. His entire moving story may be seen in the YouTube video below.

He also opened up about Taps Across America. The National Moment of Remembrance is an annual event that asks Americans, wherever they are at 3 p.m. local time on Memorial Day, to pause for a duration of one minute to remember those who have died in military service to the United States. “I will be sounding Taps this Monday at 3 p.m. in remembrance and honor of the men and women that have paid the ultimate sacrifice,” he said.

The time 3 p.m. was chosen because it is the time when most Americans are enjoying time off from work for the national holiday. The Moment was first proclaimed in May 2000 for Memorial Day that year and was put into law by the United States Congress in December of 2000.

Taps honors the men and women who have laid down their lives and paid the ultimate sacrifice for the cause of freedom.

He added that he also signed up for Taps for Veterans, which provides an opportunity for trumpet players to sound Taps for military veteran’s funerals and ceremonies.

Most recently, in mid-May, he performed “Goldfinger” on his trumpet at the “Samantha’s Friends” benefit fundraiser that took place in Lakewood Ranch, Florida, and this year’s theme had a “James Bond Casino Royale” theme to it. “Samantha’s Friends was awesome. It is always a great event and a great time,” he said. “It benefits the Southeastern Guide Dogs, which I couldn’t be more grateful for.”

Southeastern Guide Dogs began in 1982 with a single vision: to help those who cannot see. Today, they also serve veterans with disabilities and children with significant challenges. They are an internationally accredited guide and service dog school that is headquartered in Palmetto, Florida. “Thanks to this organization, myself and numerous other veterans and people with vision issues are blessed with these amazing companions. These amazing dogs are angels,” he said.

“I went last year in September and that was a great time as well,” he added. “It was nice to see all of the daytime celebrities and it benefits a great cause. This time was even more special because there was a veteran in the audience that was inspired by my story, and was struggling with similar issues, and he left the event with information on how to apply for a service dog with Southeastern Guide Dogs. I think that was a big deal and that was all thanks to Samantha’s Friends.”

These guide dogs transform lives by creating and nurturing extraordinary partnerships between people and dogs. They help improve and positively impact the lives of people with disabilities and military members that have been experiencing PTSD. “It is an amazing organization that is run by amazing people. The dogs are all top of the line and they have the best care,” he said.

“Also, not one veteran has committed suicide thanks to the service dogs that have been placed with them,” he added. “I support their mission and everything that they do.”

“The ‘Pip’ video is so cool. I saw it when it first came out. It is such a tear-jerker with a happy ending,” he added. “It is pretty amazing.”

The organization operates the most advanced training facilities of any service dog organization in the world. Their experts breed, raise, and train elite working dogs and they now have over 1,200 dogs under their auspices. “The Southeastern Guide Dogs is helping to reduce the veterans’ suicide rate, and that’s a really big thing,” he said.

“Losing one veteran a day is too much. All of the veterans that have service dogs have not taken that step, and that’s amazing. That’s the key to what they are doing, and I think people need to realize that. Without organizations like these, they wouldn’t be saving people’s lives everyday.”

For more information on the Southeastern Guide Dogs, visit their official website.