Many research institutes and technology companies are looking at long-standing problems in different ways; this includes taking models from nature and harnessing digital technology to see how medicines and medical devices can be improved. One such example is with retinal implants, where advances in computing allow different approaches to be tested and modeled, ahead of the design stage and later medical trials.

The aim of the research is develop a process to help those facing vision loss as the result of retinal diseases. This includes conditions like macular degeneration. Macular degeneration is a medical condition which can lead to blurred or no vision in the center of the visual field. With the onset of the condition, over time some people experience a gradual worsening of vision that may affect one or both eyes. Here loss of central vision can make it hard to recognize faces, drive, read, or perform other activities of daily life.

The new research looked at a type of bio- implant, designed to be inserted behind the eye’s retina. The implant is composed of an array of fractal electrodes. The electrodes would function to stimulate retinal neurons. The reason for using fractals is because fractal objects have repeating patterns at many different scales. Here fractals are different from other geometric figures due to scale; as an example, doubling the edge lengths of a polygon multiplies its area by four, which is two (the ratio of the new to the old side length) raised to the power of two (the dimension of the space the polygon resides in). Fractals occur in nature, with the snowflake being a commonly cited example. 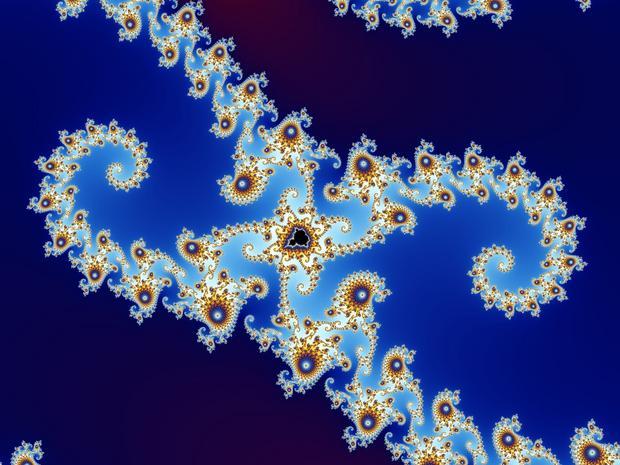 A fractal image – Benoit Mandelbrot, who has died aged 85, was the mathematical genius behind fractals
Wikimedia Commons (CC BY-SA 3.0)

The idea behind the implant is to use electrodes that possess the same fractal shape as the neurons with which they will interact.

The computer simulation work has shown that it should be possible, using a fractal implant, to allow medics to deliver 20/80 vision. The fractal model stimulated 90 percent more neurons while using less voltage, compared with current implants (which are termed Euclidean electrodes). This is according to the lead researcher, Professor Richard P. Taylor. The acuity of 20/80 vision means that people so rated can see objects at 20 feet away that those with 20/20 vision can see at a distance of 80 feet. Current retinal implants only deliver 20/1260 vision, as with implants placed in front of the retina.

In a research note, Professor Taylor said: “Operating under identical conditions in our simulations, we’ve shown that a single fractal electrode stimulates all of the target neurons, while the Euclidean electrode connects with only 10 percent of them.”

There is, however, some way to go before the technology can be used with people. The next wave is to conduct animal trials. The research has been published in the journal Scientific Reports, in a paper titled “Fractal Electrodes as a Generic Interface for Stimulating Neurons.”