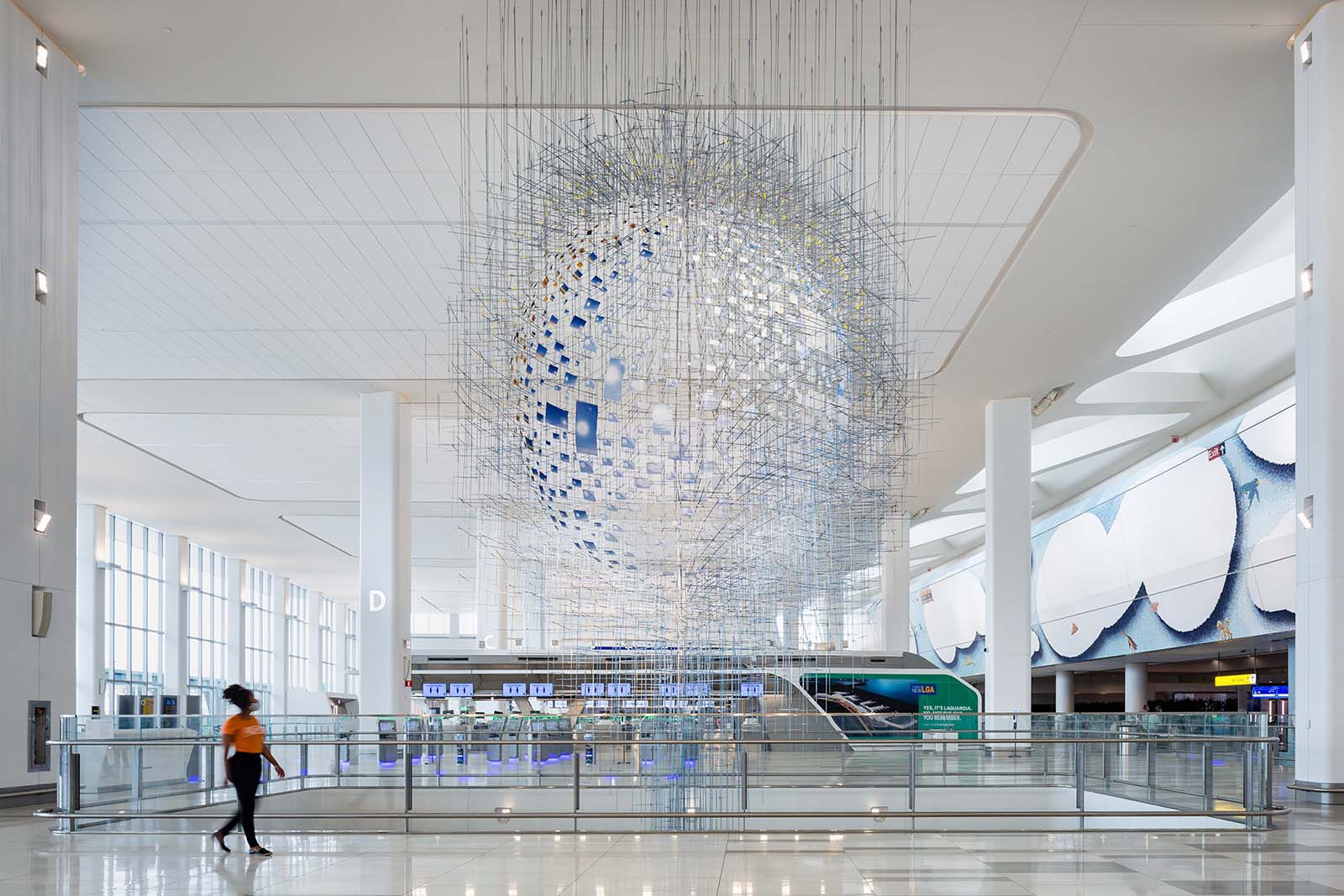 An area of LaGuardia Airport has been a given a cool new make-over, including a fascinating artwork installation created by the artist Sarah Sze. One of the motivations behind the commission is to help redefine the airport.

One of the transformative installations helping to reshape the airport is a magnificent spherical sculpture, titled “Shorter than the Day”. The inspiration for the piece (and its title) comes from an Emily Dickinson poem called “Because I could not stop for Death,” which ponders upon life’s finality.

Redressing the tired with the vibrant and new

New York’s LaGuardia Airport had an unenviable reputation for being one of the worst airports in the U.S. This relates to both the passenger experience and the overall look and feel of the inner and outer space. A series of renovations to the airport’s terminals, parking system, and drop-off and pick-up areas are underway.

Some of the main complaints about the airport across the past few years have included the airport being too cramped, poorly-lit, and generally dirty. Things are set to change, and the artworks are recreating the airport as a fresh, interesting, and challenging space.

Sarah Sze, a professor of visual arts at Columbia

Sze is a contemporary artist who has specialized in sculpture and installation works, drawing upon everyday objects to create multimedia landscapes. Previously Sze has designed an immersive artwork for the Second Avenue Subway in New York City.

Blueprint for a Landscape (2017) was the name of the project that transformed each of the three entrances and the connecting mezzanine at the 96th Street Station, presenting the commuter with an opportunity to examine and amplify how they move through space.

Sze’s work is characterized by creating installations and intricate sculptures from the minutiae of everyday life. This includes taking seemingly everyday items and mundane materials and imbuing them with new significance. Many of the airport installations have been fashioned from re-purposed powder coated aluminum and steel.

Sze’s new art pieces for LaGuardia are large and all-embracing, each weighing several tons and suspended in different spaces within the airport, including the large atrium in Terminal B. The new Terminal B building will open to the public on Saturday, June 13th, 2021.

The “Shorter than the Day” exhibit is the one that has attracted the most public interest. This impressive piece combines photographs, light, sound, and video projections onto torn-up paper held in suspension by a delicate arrangement of scaffolding composed of bamboo and interspaced metal rods.

She tells CBS’s David Pogue that the installation that the 50-foot-tall installation celebrates New York, composed of a varied night-and-day constellation of images of the city she loves.

Sze’s works either help to adapt a site to help reimagine its purpose to be initiate new levels of awareness or emotion, so they more radically seek to deconstruct and to disrupt the urban fabric. While there is evidently an ecological theme, drawn from the recycling of materials, Sze also seeks to get people to reconnect with the spaces they occupy and to interconnect with each other more strongly.