The cancer drug, Tasigna (nilotinib), was developed by pharmaceutical company Novartis AG to treat leukemia patients. To put it in simple terms, nilotinib activates a system in cells that works like a garbage disposal, and it clears out unwanted proteins.

Charbel Moussa, an assistant professor of neurology at Georgetown University and an author of the study, discovered that while nilotinib killed off the cancer cells, brain cells actually became healthier. So he tried out the cancer drug on brain cells in a petri dish and found that much to his surprise, only a very small amount of the drug was needed to clear proteins considered neurotoxic. 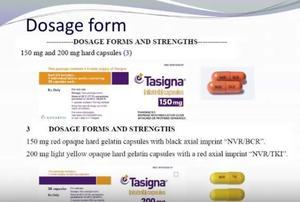 Tasigna, a drug used in Leukemia patients may prove to be helpful in treating Parkinson’s patients.
YouTube

The next step was to try the cancer drug on mice almost completely paralyzed with Parkinson’s disease. The treatment “rescued” the animals, says Moussa, allowing them to move almost as well as healthy mice. The results on the tests on the mice got the attention of Dr. Fernando Pagan, an author of the study and director of the Movement Disorders Program at Georgetown University Medical Center.

“When Dr. Moussa showed them to me,” Pagan says, “it looked like, hey, this is the type of drug that we’ve been looking for because it goes to the root of the problem.” And it was at this point that a small study was initiated, using just 12 patients with Parkinson’s.

While the results of the study are only preliminary, they are extremely promising. The 12 people who started the study, six with Parkinson’s disease, and six with a similar condition called Lewy Body dementia were given Tasigna, the drug used to treat leukemia, and instructed to take it once a day.

The study was designed to see if nilotinib was safe for Parkinson’s patients and to determine how much drug from the capsules they were taking was reaching their brains. “But we also saw efficacy, which is really unheard of in a safety study,” Pagan says.

Levels of toxic proteins in blood and spinal fluid decreased in the group taking the cancer drug, and tests showed that symptoms of Parkinson’s, such as tremors, and “freezing,” decreased. The patients were able to use lower doses of Tasigna, which to researchers meant that brain cells responsible for producing dopamine were working better.

“I never anticipated seeing this type of improvement, especially in some of these end-stage patients – stage three, four and five of Parkinson’s disease. So that’s why we’re really excited,” said Pagan. One woman who was bedridden and unable to talk was filmed talking to her doctors and feeding herself after five months on the drug.

The researchers are excited over the preliminary results and plan a bigger study with a larger group of patients and the use of a placebo in one group. There is also a downside to the use of Tasigna, it is very expensive, and costs leukemia patients thousands of dollars a month.

If this drug was proven to be effective in reversing the symptoms of Parkinson’s and other dementias, if would have to be taken for the rest of a person’s life. This was shown when the study ended and patients no longer had access to the drug. Within months, symptoms began to worsen.

Dr. Moussa says, “With a drug that’s already FDA-approved, that’s already in the clinic, that already has safety there, we can prove that we can reverse the symptoms that are associated with Parkinson’s disease.” They are already at work preparing for clinical trials in 2016 with the drug for Parkinson’s and other diseases including Alzheimer’s.

The results of the study were presented on Sunday at the Society for Neuroscience meeting in Chicago, Illinois.