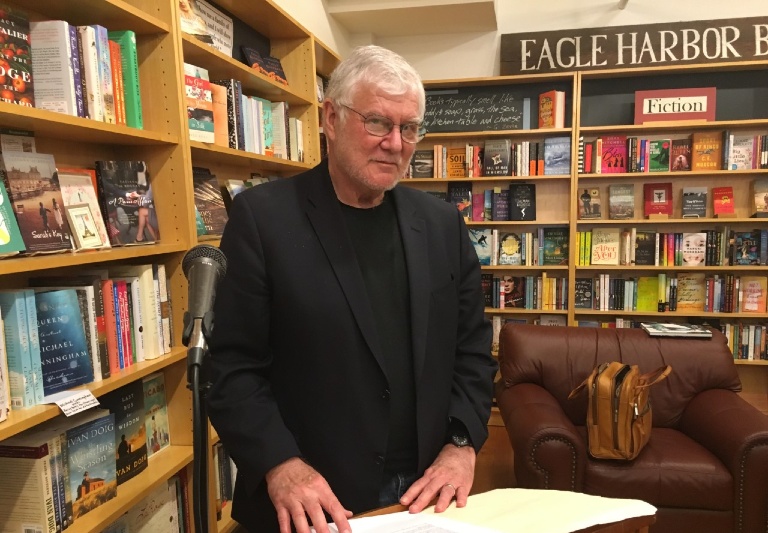 After he graduated, he wrote, directed, and produced educational films for Gilbert Altschul Productions. He began a finance program at the Northwestern University Graduate School of Business but left in his final semester to start his own film production company in Los Angeles.

In 1987, he founded an investment business, which he still runs. Burt’s novels include the thrillers Danger in Plain Sight, The Corey Logan Trilogy (Inside Passage, Teaser and Minos), and In Velvet, which is set in Yellowstone National Park.

You’re a bestselling novelist, screenwriter, movie produce, financial guru and so much more. Can you talk us through a day in the life of Burt Weissbourd?

A normal day for me begins with checking financial markets. Depending on what I find, I’ll make adjustment to my investments, making any trades that need to be done. After checking my investments I turn my attention to my new Shopify store. Shopify allows me to sell and publish my five books directly to my readers without any middlemen. Shopify allows me to have a direct relationship with my customers and readers in the new Direct to Consumer Model DTC. As an aside Shopify has been one of the very best performing stocks in the past few years, so as an investor I’m interested too. I am now part of a new way and massive shift of conducting e-commerce business online.

When the Shopify work is done, I begin writing. I write every day, seven days a week, and there’s nothing I enjoy more. I’m in the middle of writing a sixth book, the sequel to Danger in Plain Sight.

During the five or six months building up to the Academy Awards, on April 25th this year, I also spend time in the evenings preparing to vote on the Awards. I’m a voting member of the producer’s branch of the Motion Picture Academy. I try to watch all of the movies I receive before I nominate for best picture, then decide which of the nominations to vote for in all of the other categories.

Callie James is a very dynamic and compelling character. Did she evolve over time, or did you have her character worked out before you started writing the series?

Callie James was a very interesting character to write, and she evolved over time. I wanted to write a very capable, strong woman who was operating below her capacities. I made her very able in her restaurant, but pretty much shut down everywhere else. So it was very satisfying to watch her take the lead when she was under pressure, faced with real danger and serious consequences.

Her ability to surprise herself, and me, and grow into a self-aware, mature, tough woman was one of the great pleasures in the book. Her ability to move into an unexpected very satisfying relationship with a man she couldn’t imagine being with in the beginning of the story only added to that pleasure.

There are so many genres today that authors write in, how did you come about writing in the Thriller and Mystery genres and why?

My background, before writing books, was as a movie producer who often worked developing screenplays with great screenwriters. Writers I worked with included the great mystery writer Ross MacDonald, who wrote his only screenplay for me, Andy Lewis who wrote Klute, Joe Esterhas who wrote Basic Instinct, Stewart Stern who wrote The Ugly American and Rebel without a Cause, Alvin Sargent who wrote Ordinary People, Spider-Man 2 & 3 and the Amazing Spider Man, and many other screenwriters (I did not work on these movies, though I worked with the writers who wrote them).

Many of those projects were character-driven thrillers. My main interest in writing was to explore complex, unexpected characters, and I found that thrillers allowed me to do that in a way that was also entertaining and, finally, commercial.

How long did it take for you to write ‘Danger in Plain Sight’ and what was one of the challenges you faced if any while writing it? What advice do you have for other authors looking to follow in your footsteps?

Danger in Plain Sight took more than a year to write. The main challenge was how to make Callie’s evolution into a self-aware, strong, assertive woman believable. In fact, I wanted it to be totally genuine. I wanted the reader to understand that making those changes was difficult and, finally, earned.

My advice to other writers is to keep writing. and rewriting, until you know you have it right.

Now that your books are bestsellers, do you ever see them being turned into a miniseries or feature film?

We’re working to turn the Corey Logan Trilogy into a long form TV series. That’s an ongoing project. I’m working on it with Jacob Epstein, a writer and executive story editor of Hill Street Blues, a writer of LA Law and many other TV movies and TV series. We co-wrote teleplays for Inside Passage and Minos.

Writing and selling are two very distinct aspects that every novelist has to learn. I see that you opened a new Shopify account which is different the normal avenues that authors take, so the question is why Shopify as a sales platform?

Shopify is a really exciting marketing and selling platform for solopreneurs and in my case as an independent author. It is simple, straightforward and easy to manage. For the first time in the publishing industry, there is a technology that allows the author to have a direct relationship with the Consumer

(DTC). Shopify allows me to sell my book on any platform, my website, Facebook, Instagram, Amazon, and others. I can meet and find my readers wherever they live online. This is an exciting time in the changing relationship between publisher and readers and I am happy to be part of this new shift with Shopify.

“Danger in Plain Sight” by Burt Weissbourd is available on Amazon and Shopify.

To learn more about Burt Weissbourd, check out his official website.

In this article:Book, Burt Weissbourd, danger in plain sight, Novelist