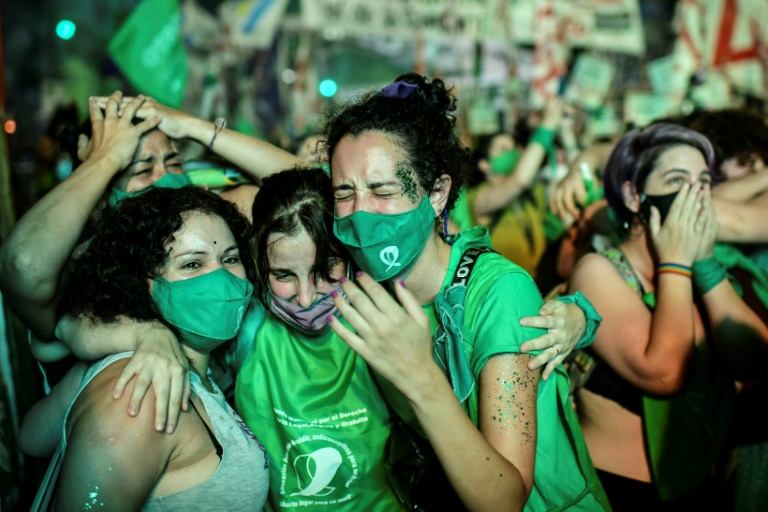 A year ago Argentina joined the limited ranks of Latin American countries to have legalized abortion, but while that gave hope to millions of women, changing mentalities, practices and infrastructure has proved more difficult.

“In small villages you go for an ultrasound in the morning and in the afternoon the baker congratulates you on your pregnancy,” Monik Rodriguez, 33, told AFP.

Ropdriguez, who has three children, runs a service accompanying women who want to have an abortion in Salta, a conservative Catholic province in the South American country.

Away from the big city of Buenos Aires, where women erupted in celebration when the law was approved, many in more remote and conservative areas of Argentina face the same stigma as before.

“There are still things that need to come out of hiding,” said Rodriguez, who can take up to 125 telephone calls a month as part of the project launched by the Women’s Strength civil association.

“The most important thing is to listen. It’s about trying to overcome the hurdles, accompanying them through the health system so they don’t get lost in the bureaucratic labyrinth.”

Rodriguez takes calls from all sorts: teenagers and first-time mothers to women with large families and even those that are pre-menopausal.

“On this line, abortion is not recommended but neither is motherhood romanticized,” said Rodriguez, who underwent a secret abortion a decade ago when already mother to one child.

“I was late and had an abortion. It went badly and I had to go to hospital. The tests showed I hadn’t been pregnant.

“It was the secrecy that created worry. Along with misinformation, that is what puts us at risk.”

For a century, abortion was only legal in cases of rape or if the mother’s life was at risk.

Legalization has not led to a sudden spate of abortions, particularly in places like Salta.

Miranda Ruiz, 33, is the only doctor in Tartagal — a small town of 75,000 people in Salta — not to exercise her legal right to be a conscientious objector to carrying out abortions.

Anti-abortion groups in the town are influential.

In September, Ruiz was briefly detained following an accusation by the aunt of a 21-year-old patient that she had performed an abortion beyond the authorized limit of 14 weeks.

Feminist groups are demanding that her case be dismissed.

“It is a way of bringing the other doctors to heel,” said Sofia Fernandez, a member of the National Campaign for the Right to Abortion — a collective of 300 feminist organizations that have been fighting for 15 years for change.

They say there are still 1,500 people facing criminal cases over abortions.

The complaint against Ruiz was the only one made in 2021, although there have been 36 court filings against the law, mostly claiming it is unconstitutional.

“Of those, 24 have already been dismissed,” said Valeria Isla, the director of sexual and reproductive health at the health ministry.

“There is a huge inequality in access to the practice depending on location,” said Isla.

During the course of 2021, the number of specialist medical teams carrying out abortion rose from 943 to 1,243 despite the pandemic complicating matters.

“But there is a lot of demand and we’re not able to increase (the number of) these (teams) at the necessary rate. It’s a structural stumbling block,” added Isla.

There were more than 32,000 abortions conducted in public hospitals and clinics in 2021, said Isla, whose big goal for 2022 is to train medical teams specialized in abortions, to make their services more widely available and to inform women of their rights and the tools at their disposal.

That would help Rodriguez avoid taking calls from desperate young teenagers like one “locked in a bathroom crying … she had just dropped a home pregnancy test down the toilet and couldn’t afford to buy another one.”