In a preliminary study conducted by researchers at the University of La Plata in Argentina, it was found that 85 percent of feminine hygiene products sold in Argentina were contaminated with glyphosate. An additional 62 percent of samples were found to contain AMPA (aminomethylphosphonic acid), a derivative of glyphosate.

Glyphosate is the key ingredient in Monsanto’s herbicide, Roundup, as well as about 100 other products made by other companies. Earlier this year, glyphosate was ruled by the World Health Organization’s cancer research arm to be a likely carcinogen. 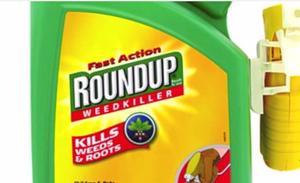 AMPA, or aminomethylphosphonic acid, is a weak organic acid that contains a phosphonic acid group. AMPA is one of the byproducts of the degradation of glyphosate and has the same toxicity as glyphosate. It has also been shown that in GMO crops that are tolerant of glyphosate, AMPA is the main residue of degradation.

Dr. Damian Marino, the study’s head researcher told local news media, “Eighty-five percent of all samples tested positive for glyphosate and 62 percent for AMPA, which is the environmental metabolite, but in the case of cotton and sterile cotton gauze the figure was 100 percent.” He also noted that all of the products tested were found in local supermarkets and pharmacies in Argentina.

Dr. Marino added, “In terms of concentrations, what we saw is that in raw cotton AMPA dominates (39 parts per billion, or PPB, and 13 PPB of glyphosate) while the gauze is absent of AMPA but contained glyphosate at 17 PPB.”
The findings were presented last week at the third national congress of Doctors of Fumigated Towns in Buenos Aires.

Dr. Medardo Avila Vazquez, president of the congress, speaking to RT.com said the research study presented is “very serious when you use cotton or gauze to heal wounds or for personal hygiene uses, thinking they are sterilized products, and the results show that they are contaminated with a probably carcinogenic substance.”

“We had focused our attention on the presence of glyphosate in food, but did not think the products we use in all hospitals and health centers in the country to cure patients are contaminated with a carcinogenic product. The authorities must give an immediate response to this situation.”

“Most of the cotton production in the country is GM [genetically modified] cotton that is resistant to glyphosate. It is sprayed when the bud is open and the glyphosate is condensed and goes straight into the product,”{ Vasquez added. 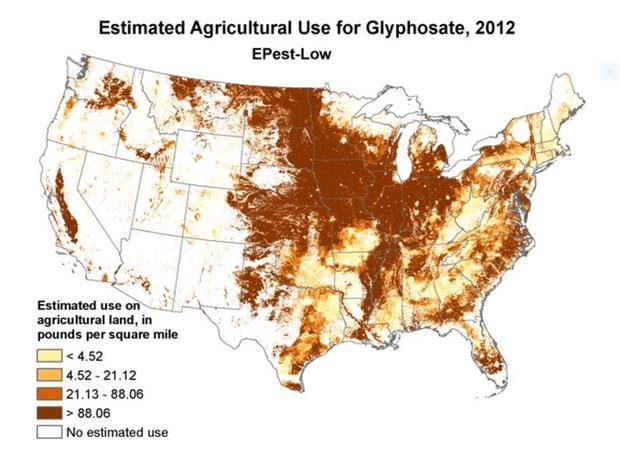 Monsanto’s Roundup is the most popular weed-killer in the United States. “Roundup Ready” cotton, soy and corn grown in the U.S. are raised from genetically-modified seeds that are tolerant of the herbicide, glyphosate. Actually, the U.S. Geological Survey says that farmers sprayed 2.6 billion pounds of Monsanto’s glyphosate herbicide on U.S. agricultural land between 1992 and 2012, 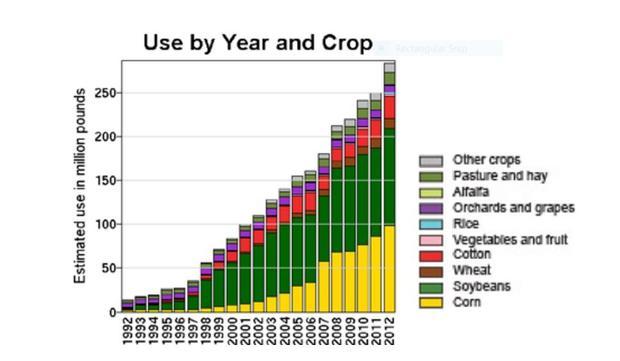 Figures for 2015 provided by the U.S. Department of Agriculture (USDA) show that 94 percent of the country’s cotton acreage is planted with GMO varieties, including those with herbicide tolerance, insect resistance or stacked traits, meaning more than one genetically engineered preference.

Monsanto stands by its product, pointing out Roundup was approved by the Environmental Protection Agency, which “classified the carcinogenicity potential of glyphosate as Category E: ‘evidence of non-carcinogenicity for humans.’” The Agri-Giant is also demanding a retraction by WHO over its assertion that glyphosate is a probable carcinogen.

Because of Argentina’s policies concerning imports and currency in recent years, tampon imports come from Brazil, Miguel Ponce, head of the Chamber of Importers, told the Associated Press. Those tampons include American brands, such as OB and Kotex.