James Bond movies are one of the longest running film franchises of all time. While some of the movies have stood the test of time better than others in terms of enjoyment and production values, each brought a touch of glamour. As well as daring escapades, attractive women and martini based cocktails, vehicles have played a large part with the Bond brand.

The London Film Museum is located in Covent Garden. The museum opened in 2008 and hosts a series of different exhibitions. 2016 sees the turn of all things James Bond.

The exhibition is titled, appropriately, Bond in Motion. The exhibition has much on offer, covering almost every James Bond movie.

One of the most interesting cars is the classic Aston Martin DB5, for years synonymous with James Bond. The Aston Martin DB5 was a British luxury grand tourer made by Aston Martin and designed by the Italian company Carrozzeria Touring Superleggera. 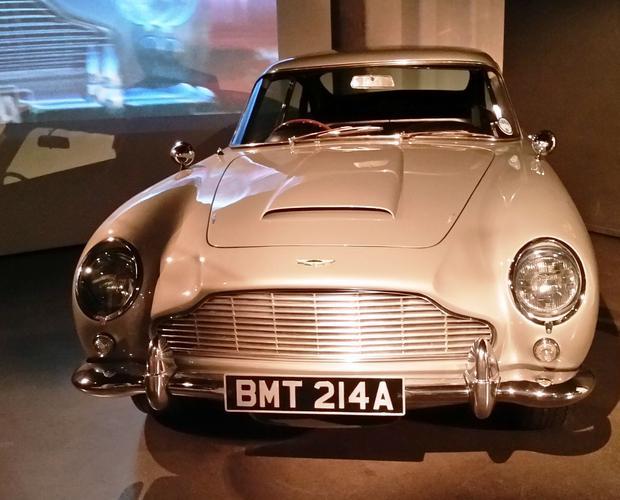 The DB5 is famous for being the most recognised cinematic James Bond car, first appearing in Goldfinger (1964).
Tim Sandle

Not all Bond cars cars end up in good condition, as this one – a DBS model – from the more recent Casino Royale movie testifies. 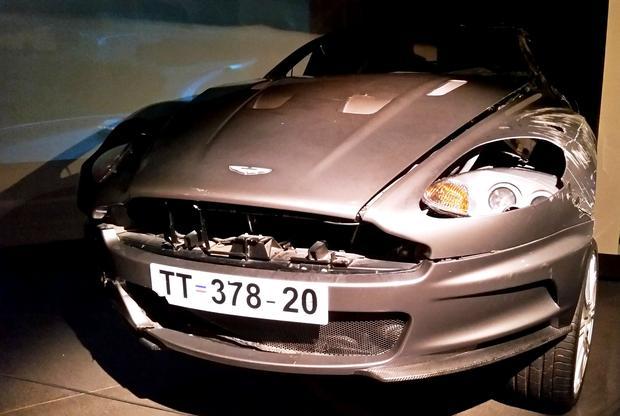 Among the classic offerings is the car from Goldfinger. The car is driven by the central villain. This is a yellow-painted Rolls-Royce with number plate “AU 1” (“Au” being the chemical symbol for gold.) 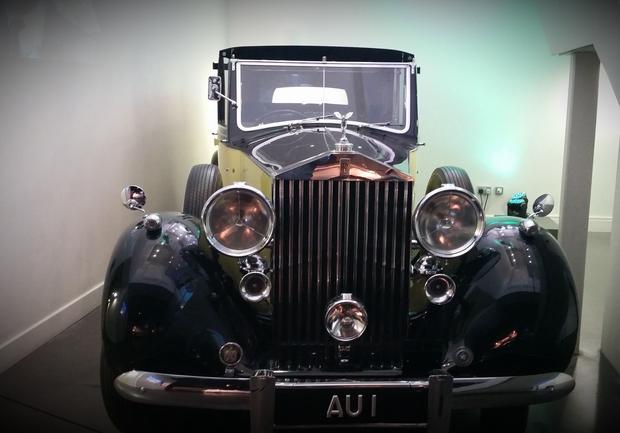 Movie scenes are on show close to some of the vehicles, like this scene of Sean Connery from the Goldfinger picture. 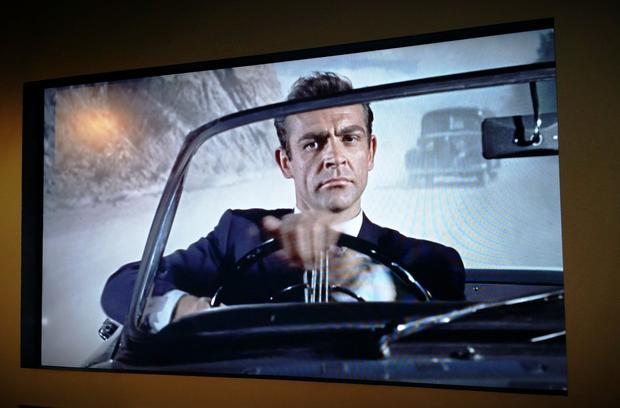 Goldfinger (1964) is a British Technicolor spy film, the third in the James Bond series and the third to star Sean Connery as the fictional MI6 agent James Bond.
PR photo

In 1969 Bond switched vehicles to a Mercury Cougar XR7, for the picture On Her Majesty’s Secret Service. In 1967, the Cougar was available in two models (base and XR-7) and only came in one body style (a two-door hardtop, no center or B-pillar). 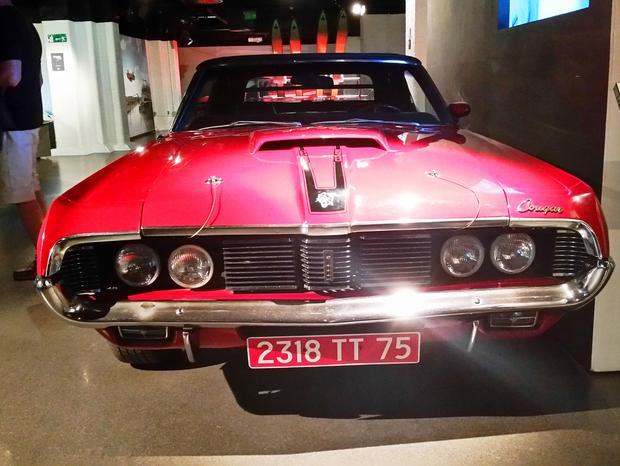 On Her Majesty’s Secret Service (1969) is the sixth spy film in the James Bond series.
Tim Sandle

With a 1970s feel, the Lotus Esprit from The Spy Who Loved Me was a popular attraction, judging by the attention it received from the museum visitors. The Esprit was launched in October 1975 at the Paris Auto Show, and went into production in June 1976. 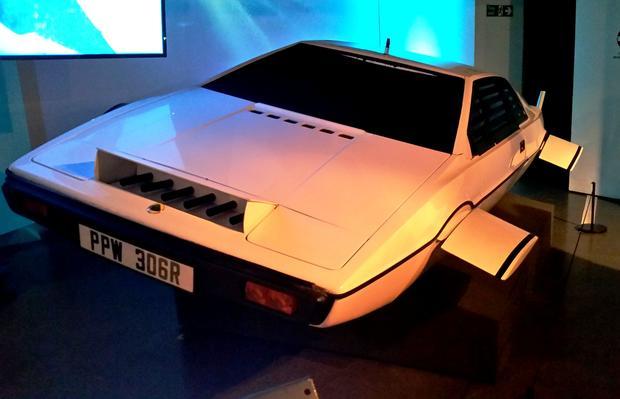 The Spy Who Loved Me (1977) is the tenth spy film in the James Bond series, and the third to star Roger Moore.
Tim Sandle 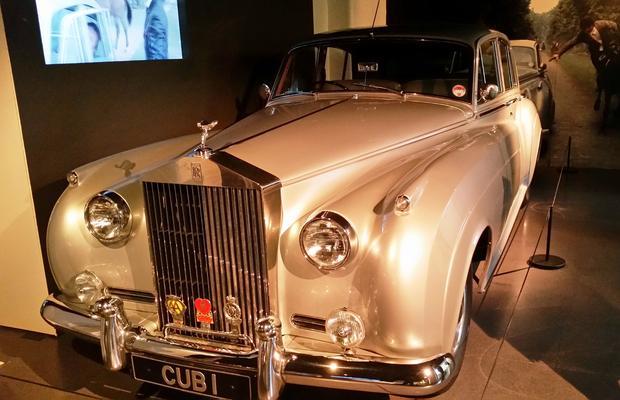 A View to a Kill (1985) is the fourteenth spy film of the James Bond series, and the seventh and last to star Roger Moore as the fictional MI6 agent James Bond.
Tim Sandle

Also from the middle era, a Jaguar XKR from Die Another Day, in garish green. The Jaguar XK are a series of grand tourer cars. 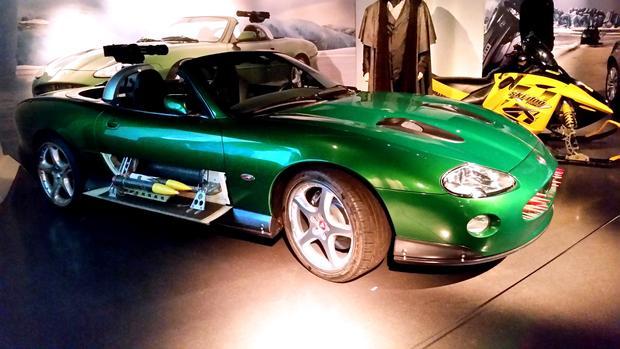 Die Another Day (2002) is the twentieth spy film in the James Bond series, and the fourth and last film to star Pierce Brosnan.
Tim Sandle 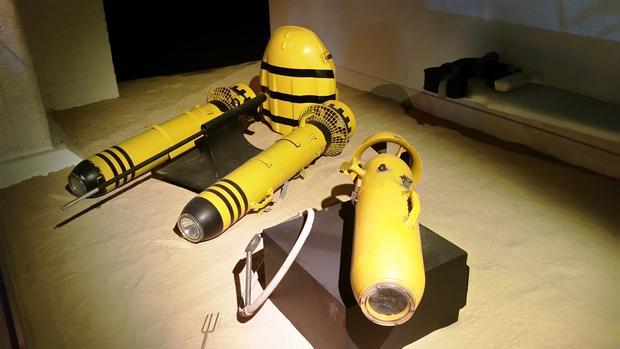 From The Living Daylights an Aston Martin V8. As with all traditional Aston Martins, this car was entirely handbuilt and it took 1,200 man-hours to finish. 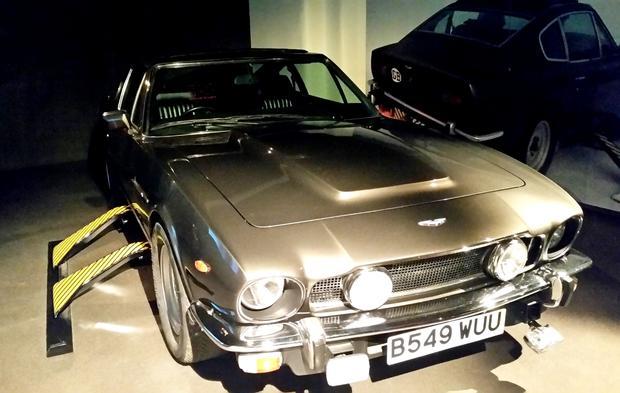 The Living Daylights (1987) is the fifteenth entry in the James Bond film series and the first to star Timothy Dalton. The film reunites Bond with the car maker Aston Martin.
Tim Sandle

The World Is Not Enough saw Bond’s first BMW, a Z8 series car.

The World Is Not Enough (1999) is the nineteenth film in the James Bond series, and the third to star Pierce Brosnan.
Tim Sandle

Things are brought up-to-date with Spectre, and the sleek and futuristic looking Aston Martin DB10. 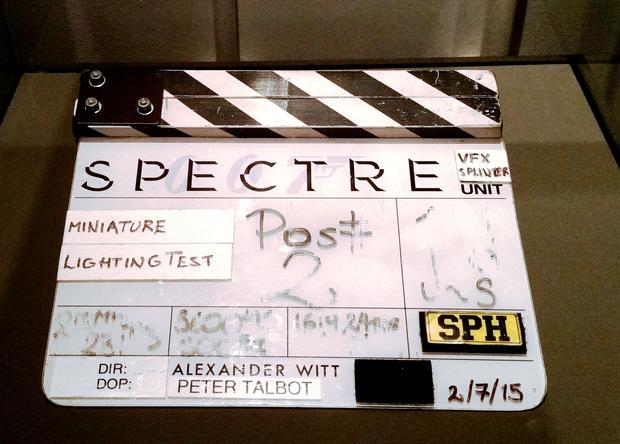 The clapperboard from the Bond movie Spectre.
Tim Sandle 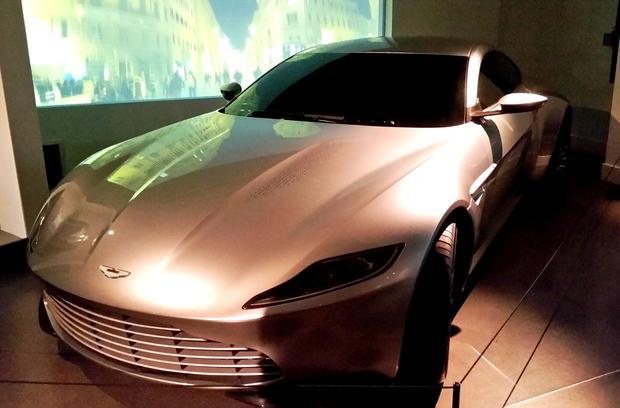 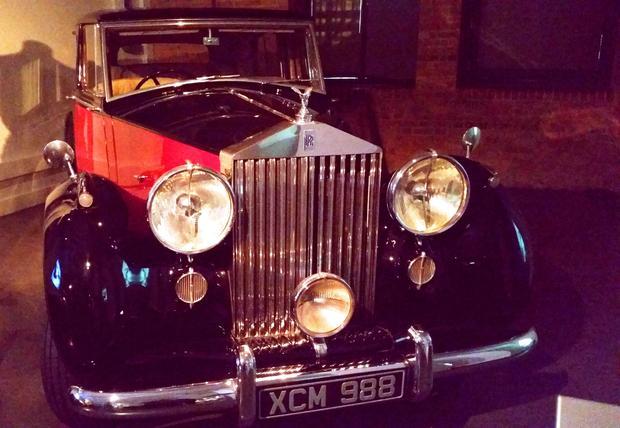 The Rolls-Royce Wraith was built by Rolls-Royce at their Derby factory from 1938 to 1939.
Tim Sandle

Other types of vehicle include this jet, from Octopussy. This is the BD-5J (also known as the “Acrostar Jet “, a 300 miles per hour aircraft. 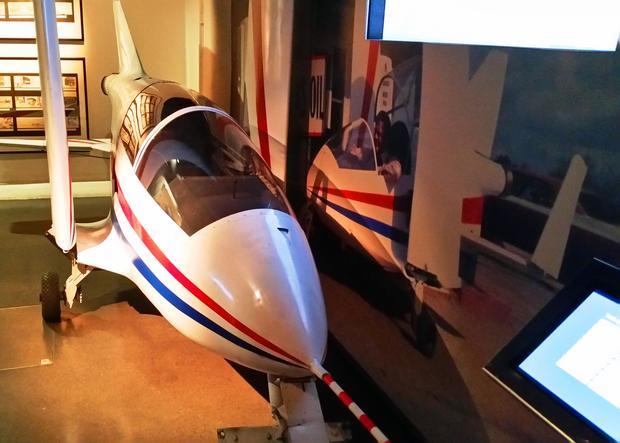 Octopussy (1983) is the thirteenth entry in the Eon Productions James Bond film series, and the sixth to star Roger Moore as the fictional MI6 agent James Bond.
Tim Sandle

Plus a set of motorcycles from various movies. 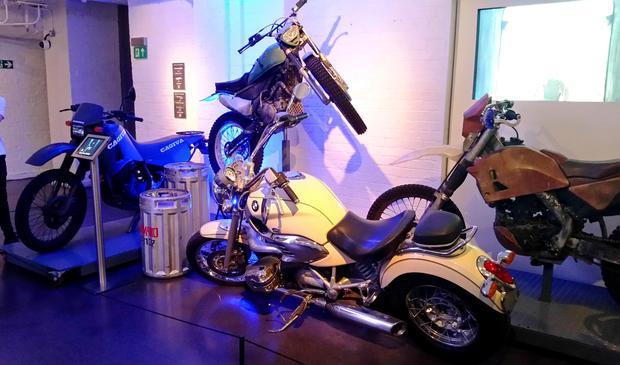 Some cars are displayed as concept art too, such as this development sketch from Moonraker. 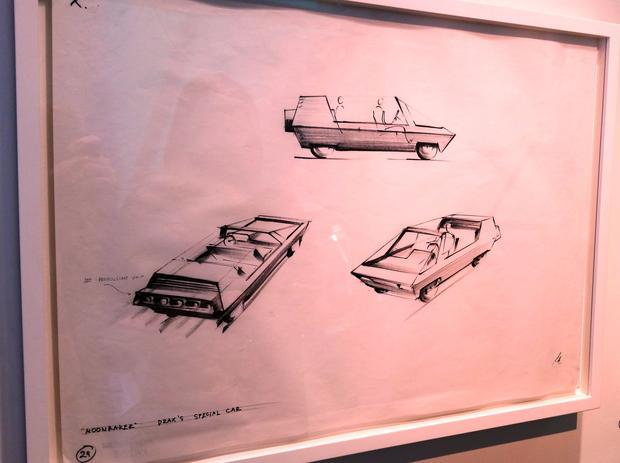 Moonraker (1979) is the eleventh spy film in the James Bond series, and the fourth to star Roger Moore.
Tim Sandle

As well as cars there is other memorabilia, such as clapperboards and storyboards. The two below are taken from the movie Goldeneye. 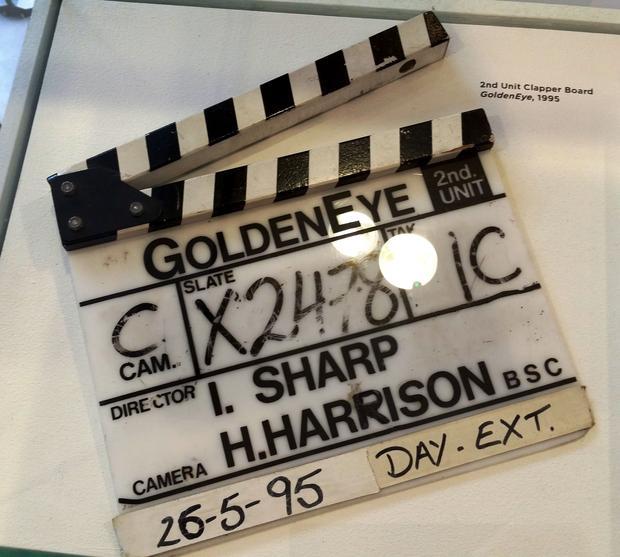 GoldenEye (1995) is the seventeenth spy film in the James Bond series.
Tim Sandle 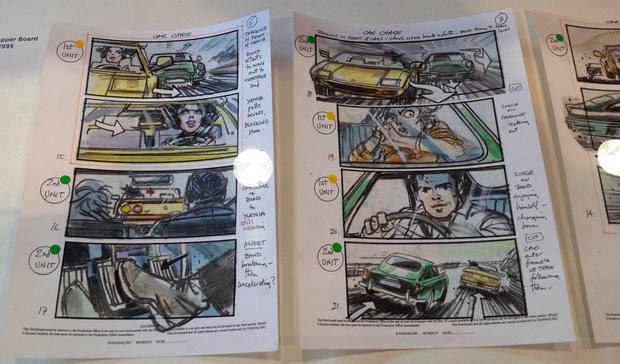 A storyboard from ‘Goldeneye’, the first James Bond movie to feature Pierce Brosnan as the fictional MI6 officer.
Tim Sandle

There is also a replica of the M16 building, Bond’s headquarters. 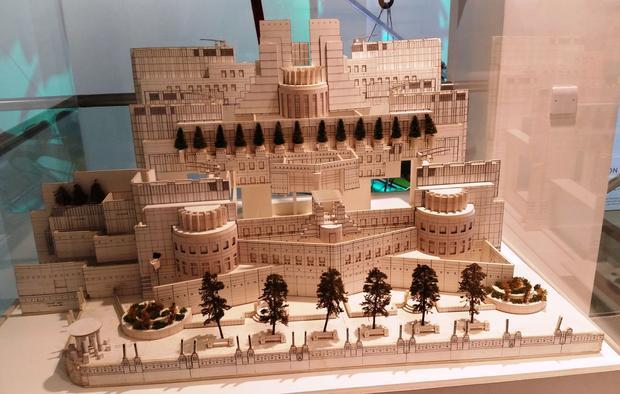 For fans of James Bond, movies in general, or cars, the exhibition holds great interest. The entry cost is £15 ($25). 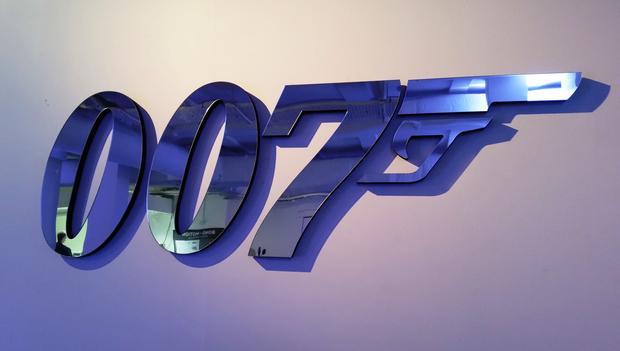