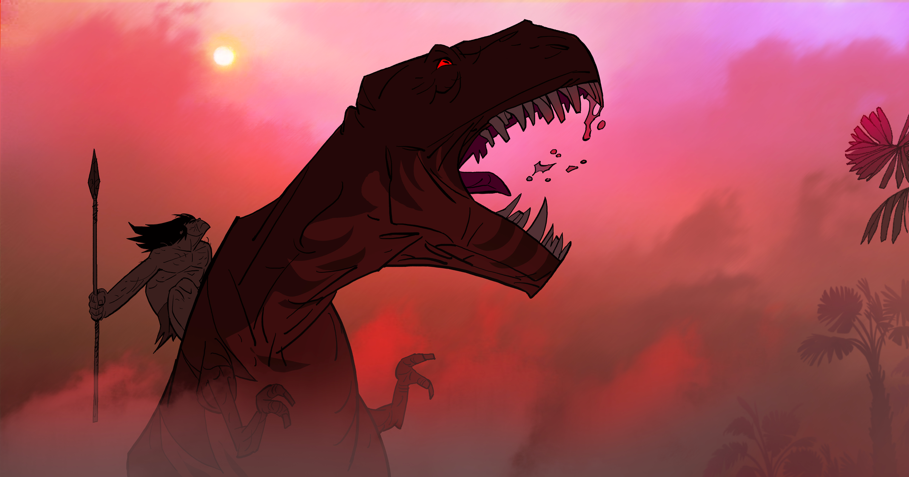 This week’s releases include a visceral tale of survival in the harshest of environments; the reincarnation of powerful saviour who must learn to harness her skills; an outrageous thriller featuring body modification and religious; and a parody series that breaks all the rules.

A caveman at the dawn of evolution. A dinosaur on the brink of extinction. Bonded by tragedy, this unlikely friendship becomes the only hope of survival in a violent, primordial world.

This series is unique and powerful as it silently follows two unlikely allies who work together to survive the perils of prehistoric Earth. The caveman and dinosaur often growl and “yell” at each other, but there are no words spoken for the entire season — until the final episode presents a character who speaks, but in an unknown tongue. The first episode is heart-wrenching as one tragedy follows another and it’s several episodes before the mood lightens at all. However, as the pair’s bond grows, they have more moving interactions and share the occasional moment of amusement. However, living in such a harsh and treacherous environment, pain and calamity are always lurking. The latter half of the 10-episode season introduces some interesting threats, including witches, a zombie-like virus and slave-traders, all of which bring with them their own heartbreak. Ending on an unexpected cliff-hanger, it will be interesting to see how these independent but connected characters move forward.

The Legend of Korra: The Complete Series steelbook (Blu-ray)

From meeting Avatar Korra, a teenage girl from the Southern Water Tribe, in Book One, to opening the spirit portal and entering a new age where spirits and mankind coexist in Books Two and Three, to embarking on a journey of self-discovery and restoring balance to the Earth Kingdom in Book Four, the spirit of the Avatar lives on in this series.

From a young age and long before she receives any formal training, Korra exhibits signs of being the Avatar reborn. With training, she becomes an unstoppable force who at 16 must shoulder the responsibility of her birthright. In just Book One, she leaves her home, falls in love, is imprisoned, leads a rebellion and faces an identity crisis. Even though it’s a continuation of the Avatar: The Last Airbender series, it’s not directly reliant on viewers having seen the original show — though fans will be able to connect certain elements to its predecessor. Each 30-minute episode is gripping and visually attractive, making it easy to get lost in a marathon of needing to see what happens next. And although the narrative of super-humans vs. humans is a common one, this series has a fascinating take on it.

Special features include: commentaries; “Creators’ Favourite Scenes: Animatics”; “Kindred Spirits: Tenzin’s Family”; “Inside the Book of Spirits”; “The Re-Telling of Korra’s Journey”; “The Spirit of an Episode”; “The Making of a Lenged: The Untold Story”; and New York Comic-Con panel. (Paramount Home Entertainment)

Set in a godforsaken bar in the middle of nowhere, an all-girl band (Michelle Argyris, Emily Alatalo, Chelsea Muirhead and Kiriana Stanton) — Ms. 45 — rips the stage apart with their punk spirit. But their performance impresses an enthusiastic fan (Jason Rouse) who lures the girls into a trap, sedates them, and starts…customizing them. Slowly they begin to gain consciousness and, in total shock, realize their arms have all been replaced with axes and chainsaws to fight gladiator-style in a junkyard arena owned by a sadistic “emperor,” (Julian Richings) forcing them into the battle of their lives with one prize in mind — their freedom.

This movie’s premise is so out there, the only thing to do is sit back and take in the bizarre and bloody spectacle unfolding before your eyes. The four women learned to be very capable as they strive to make their mark in the male-dominated punk circuit. Unfortunately, their no-holds-bar act has more than the usual negative consequences in this particular town. The surgery is as weird as anything else in the picture, though their retrofitted weapons are pretty awesome. The order in which they’ll be dispatched is obvious as their group dynamics are established pretty quickly. On the other hand, the relationships within the compound are more difficult to grasp as everyone may or may not be lying to everyone else. The fight scenes are strong, mixing gory blows with whatever the audience may imagine is occurring off-screen. However, in spite of the outlandish narrative, it’s the ending that’s most off-putting as it doesn’t feel aligned with the characters’ arcs.

Clarence and the Beat Kids take to the streets, bringing joy, confusion and panic to all. Wonder Showzen shocks and alarms as they ask the important questions: where do babies come from, when the revolution comes where will you hide, and should the letter P get liposuction?

The adult sketch comedy show was a parody of educational PBS children’s shows, such as Sesame Street and The Electric Company. It was picked up by MTV2 as the channel attempted to rebrand, airing for two seasons from 2005 and 2006. Satirizing everything from politics, religion, war, sex and culture, no topic was too controversial. In fact, each episode began with the following disclaimer: “Wonder Showzen contains offensive, despicable content that is too controversial and too awesome for actual children. The stark, ugly and profound truths Wonder Showzen exposes may be soul-crushing to the weak of spirit. If you allow a child to watch this show, you are a bad parent or guardian.” A segment titled, “Beat Kids” was the most consistent to appear in most episodes, generally featuring a boy named Trevor who poses as a word-on-the-street reporter and asks random adults amusingly offensive questions in line with the episode’s theme. The series’ dark sense of humour would not appeal to every, which may explain its brief lifespan, but it did include cameos by several comedians and other celebrities, including David Cross, Flava Flav, Zach Galifianakis, Jon Glaser, Christopher Meloni, Amy Poehler, Amy Sedaris and Rick Springfield.