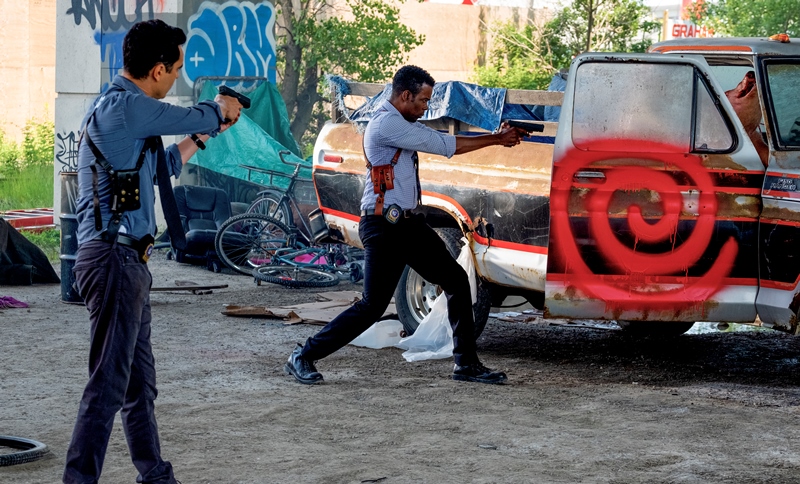 This week’s releases include travel to a new world; a killer’s theory repurposed; a historical drama about a troubled royal union; the penultimate season of a horror series; a muddled commentary; and a classic car-revenge picture.

During a university’s pledge week, the carefree partying turns deadly serious when a star athlete is found impaled in his dorm. The murder ignites a spree of sinister social-media messages, sweeping the students and police into a race against time to uncover the truth behind the school’s dark secrets…and the horrifying meaning of a recurring symbol: a single exclamation mark.

Although a potential college campus rape at a fraternity party is the catalyst for the narrative’s events, it’s attempts to chastise the system that allows such crimes to go unpunished are a bit awkward and ineffective. Instead, the movie puts most of its focus on this strange string of murders that appear to be targeting those who perpetuate and cover-up this type of misconduct. Using a drill or something similar to dispatch most of his victims makes for less interesting murders, which only contributes to the film’s banality. Moreover, the picture feels very fractured in its attempts to incorporate multiple elements, from its condemnation of campus rape to the evil uses of social media to the mysteriously strong serial killer.

The epic story of Queen Catherine (Charlotte Hope) and King Henry VIII (Ruairi O’Connor) continues in this conclusion to the dramatic miniseries. Beloved by their people and presiding over the most glamorous court in Europe, Catherine and Henry see their relationship tested as Catherine prepares to give birth to an heir, and England wars with France.

This second season is a significant departure from its predecessor as the happy union between Catherine and Henry begins to deteriorate. At first, both are excited to be equally contributing to the marriage and rule of the country. Catherine lends her strategic and intellectual mind to the court, which is fine — until her attempts to stay on equal footing with her husband leads to a significant rift between the couple. In spite of their best efforts, they never fully recover and the fractures in their relationship continue to widen. This new Henry becomes very vindictive to even those closest to him, where no one is safe from his cruelty. This season also shows the rise of anti-immigrant sentiments in the country, which affects Catherine’s confidante, while Meg Tudor struggles to maintain her position in Scotland.

There are no special features. (Lionsgate Home Entertainment)

A criminal mastermind unleashes a twisted form of justice in Spiral, the terrifying new chapter from the book of Saw. Working in the shadow of his father, an esteemed police veteran (Samuel L. Jackson), brash Detective Ezekiel “Zeke” Banks (Chris Rock) and his rookie partner (Max Minghella) take charge of a grisly investigation into murders that are eerily reminiscent of the city’s gruesome past. Unwittingly entrapped in a deepening mystery, Zeke finds himself at the center of the killer’s morbid game.

After nine films in the franchise, it’s shocking they’re still able to come up with unique ways to cruelly kill people. But this reboot does just that, while also repurposing Jigsaw’s theory to teach a new batch of victims a lesson. This killer is certainly seeking more attention than their predecessor, sending the police clues to his victim’s locations to ensure they’re found and the orchestrator’s message is delivered. Seeing Rock and Jackson in one these films is quite surprising, but both do an excellent job fitting into this well established franchise. It’s quite interesting to watch the bonus features where it’s discussed this picture was actually pushed into production because Rock approached the producers about starring in the next film. It’s not really as unpredictable as one would hope, but it’s an interesting concept that looks like it will carry forward to future movies.

After following Commander Michael Burnham (Sonequa Martin-Green) into a wormhole, the U.S.S. Discovery lands in an unrecognizable world 1,000 years in the future. With Starfleet and the Federation on the brink of collapse due to a catastrophic event known as The Burn, the Discovery crew, with the help of new and mysterious allies Book (David Ajala) and Adira (Blu del Barrio), must uncover what caused The Burn and restore hope to the galaxy.

After last season’s major cliff-hanger, this chapter picks up exactly where the previous one left off. Michael emerges in an unknown environment, while the fates of her crew and their ability to one day be reunited are in question. However, the wormhole event is weaved into a much more intricate story that takes viewers all the way to the end of the season. Navigating a future that’s built on the same ideals, but with so many changes proves to be difficult — particularly for a crew that grapples with the fact that volunteering for the mission resulted in losing their friends and family who’ve now died hundreds of years earlier. The series continues to tell intriguing stories that not only affect Michael, but also ones that centre on the ship’s crew, new and old. As some species struggle to survive, others have found unexpected peace, while still others exploit the universal tragedy for their own gains.

Winter has turned to spring, and the collected communities are grudgingly respecting the new borders imposed upon them by the ever-brutal Alpha. But having organized themselves into a militia-style fighting force, our group of survivors is prepared for battle — though they’re keenly aware that the Whisperers, and the horde of dead they mingle with, pose a threat unlike any they’ve ever faced. Paranoia, propaganda, secret agendas, infighting — all of these will test the group, individually and collectively, with the survival of civilization in a world filled with the walking dead hanging in the balance.

Survivors have been facing walkers for the better part of a decade now, but confronting a group who’ve not only learned to live amongst the undead but direct them as a weapon is still something new. Alpha is a cutthroat leader who punishes even minor transgressions very seriously, whether internal or external to her group. Negan begins to pave a new road for himself, proving his loyalty to the group that accepts him and eventually — maybe — finding peace with his greatest past offences. The relationship between Daryl and Carol continues to evolve and is often strained as their experiences continue to fundamentally alter who they are and how they treat other people. Life is still a struggle and people still die, more often now at the hands of other survivors than walkers.

Special features include: commentaries; and “In Memoriam.” (Lionsgate Home Entertainment)

When four glowing orbs crash into each other over the Arizona desert, they leave in their wake a badass Dodge Turbo Interceptor — and its enigmatic, helmeted driver. The next day, the mysterious Jake (Charlie Sheen) appears in the town of Brooks, catching the eye of Keri (Sherilyn Fenn) and the ire of Packard (Nick Cassavetes), the ruthless leader of a gang of street racers. When gang members start losing races — and lives — to the Interceptor, the recent death of Keri’s boyfriend suddenly seems connected to the arrival of Jake, the unbeatable car…and an avenging entity called “The Wraith.”

This movie feels like it naturally progressed from Christine, a killer car concerned with the wellbeing of its owner, to a means to getting revenge on a gang of potential killers. Interestingly, in the bonus features, the film is described as a modernization of the dark Western, High Plains Drifter, which also makes sense on further reflection. A young Sheen rides in on a motorcycle, the cool, good-looking new kid in town. However, the new car on the road makes an even bigger splash as it proves matchless and deadly to its opponents. The enchanted vehicle looks slick, standing out on the dessert improvised racetracks in spite of its many encounters. The love story is not unforeseen, though many may wonder if will be short-lived. Other members of the cast include Randy Quaid as the sheriff tired of a gang running his town and Clint Howard as one of Packard’s cronies.