Forget Cruise and Crowe. The new rulers of the Hollywood roost are frat-boy comedians who are raking in huge profits and serious respect. A look inside the new Hollywood…

Digital Journal — “You know how when you grab a woman’s breast, it feels like a bag of sand?” That memorable line from The 40-Year-Old Virgin would cue laughter in most people. But for studio execs, the joke also cued that familiar sound of ka-ching — on a budget of $21 million (all numbers US), this offbeat comedy about a middle-aged virgin grossed over $109 million in the U.S. alone.

As a low-cost huge-margin hit, Virgin not only won over studio execs but also the public, who fell in love with Steve Carell’s bumbling portrayal of a sexually clueless geek. Carell is part of a huge comedy boom where comic actors are now the blockbuster stars everyone wants to see.

Joining this new “Frat Pack” are the rulers of the comedy business: the stoned-eyed Owen Wilson, the quick-talking Vince Vaughn, the always-playful Jack Black and geek-of-all-geeks Jon Heder of Napoleon Dynamite. Consider Will Ferrell the father of the crew, whose most recent flick Talladega Nights: The Ballad of Ricky Bobby earned half of its budgeted cost on opening weekend alone.

Comedies are putting millions of dollars back into studio coffers, a trend exemplified by Napoleon Dynamite — on a budget of $400,000, it grossed close to $47 million. Anchorman: The Legend of Ron Burgundy earned more than three times the amount of its $25 million budget. Compare those numbers to a film like Poseidon that cost $160 million and took in a measly $178 million. 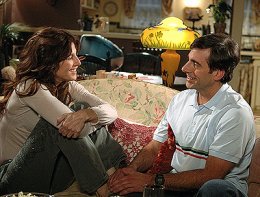 When big-name action stars like Tom Cruise headline a flick, it’s no longer a surefire recipe for success. Mission: Impossible III cost over $150 million to make and brought in just a little more than $380 million worldwide — and did I mention it’s lamer than a straight-to-DVD borefest straight from the remainder bin? Other heavily advertised flicks like Fast and the Furious: Tokyo Drift or another Cruise vehicle, War of the Worlds, just plain sucked. To make matters worse for the Cruises and Mel Gibsons of Hollywood, action fans can get all the death and destruction they want with embedded war journalists on CNN or Fox.

So it makes sense that people want to spend their money on comedies. But the top comedies of choice aren’t your shocker gross-out flicks (American Pie) or romantic gut-busters (Fever Pitch); they’re movies where the protagonist is a middle-aged man acting like an idiot.

While it’s a nice change to see Steve Carell, who was once a Daily Show regular, make it big with a breakout hit, it’s a sign of the times when goofballs become the most sought-after actors in Hollywood.

“The emphasis tends to be on this kind of arrested maturity,” says Charlie Keil, associate professor of cinema studies at the University of Toronto. “That’s what differentiates these films from movies featured in the past.” Keil cites Animal House as the originator of the man-boy underdog comedy. But John Belushi played Bluto in his 20s, whereas in Old School Ferrell introduced us to Frank the Tank as a 36-year-old actor trying to find post-SNL fame. 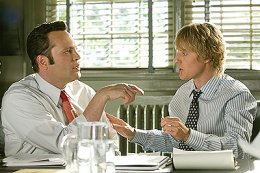 “These films recognize the aging of a populace who want to reclaim some kind of aspect of their youth, while still being knowing and adult,” says Keil.

Alison Gillmor, a veteran film reviewer for the Winnipeg Free Press and CBC, thinks movie fans are tired of watching serious leading men. “This generation is kind of skeptical of authority,” she says. “They’re suspicious of people who take themselves too seriously.”

The combination of sharp writing and risqué humour is fuelling the funny flicks of the near future. Vaughn will reprise his role in Old School 2, Carell is slated to star in next summer’s Evan Almighty, and Blades of Glory (about Olympic ice skaters) will feature Ferrell and three emerging comedy stars: Napoleon Dynamite‘s Heder, Arrested Development‘s Will Arnett and Daily Show correspondent Rob Corddry. 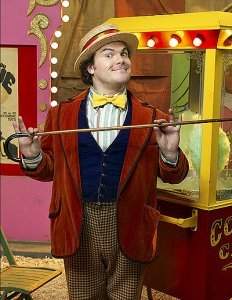 Hollywood is looking for another Steve Carell in an industry perpetually in love with random explosions and machismo-dripping heroes. Here’s hoping the “blockbuster” of the future will include films that impress viewers with cheeky humour as much as they do with star power and special effects. After all, would you rather sit through the next Vin Diesel action flick or the next Will Ferrell laughfest?

Laughing All the Way to the Bank
Movie execs are giddy over comedies for one reason: money. Laugh-heavy films cost little to produce and yield high returns, compared to the low margins that plague some blockbusters. Here’s a quick look at how action flicks compare to comedies when it comes to budget versus worldwide gross: