Today’s pop producers are gladly stepping into the spotlight and making a killing at it. Thanks to star producers like Timbaland, artists like Justin Timberlake, Nelly Furtado and many more stay fresh in the charts

Digital Journal — Nelly Furtado’s video for “Promiscuous,” the first single to her new chart-topping album Loose, looks like any other sweaty club anthem. Busty ladies writhe to the beat, macho guys grind without much rhythm, and Furtado sways her svelte bod as if she’s trying to wriggle out of her jeans. In between all the dry-humping, the camera flashes onto a big black dude standing alone, singing in front of a wall.

If you’re new to the hip-hop scene, you might assume that this guy — clearly out of place among the video’s Caucasian harem — was just a hired gun to sing on the track. But you’d be wrong. The vocalist is Timbaland, Nelly Furtado’s producer.

Not too long ago, a producer was just the quiet guy who sat behind the mixing board making sure everything sounded right. But these days a lot of producers want more than just an album credit. “Some producers would love to have the opportunity to actually be in the spotlight themselves,” says Eric Alper, director of media relations and label acquisitions for Koch Records. 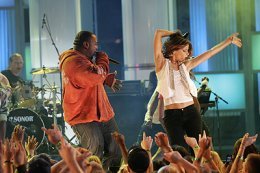 There’s no doubt Timbaland’s attracted to bright lights — he’s released four solo records — but he’s more content sharing the accolades. He recently co-wrote and co-produced 10 of 12 tracks on Justin Timberlake’s FutureSex/LoveSound, which helped propel JT’s “SexyBack” to No. 1 on the Billboard Hot 100. Timbaland’s partnership with Furtado is also a lucrative move for the Canadian R&B singer: Loose sold 219,000 albums in its first week on shelves, topping the Billboard list of top-selling albums in North America. In August, “Promiscuous” became such a summer hit it was the second-most played song on Canadian radio.

Timbaland is not the only producer-turned-star winning fame and media coverage. Kanye West, now a multi-platinum hip-hop star, was once an unknown producer creating beats and writing hit songs for Alicia Keys, Jay-Z, Janet Jackson and a host of other big names.

After almost dying in a car accident, West found God who told him to ditch working with the egos and start writing and recording his own material. “Kanye’s story is brilliant,” says Alper, whose label recently released producer-cum-rapper J-Dilla’s first posthumous release. “He’s got the mouth, the words, and these ideas that make the media want to write about him.” 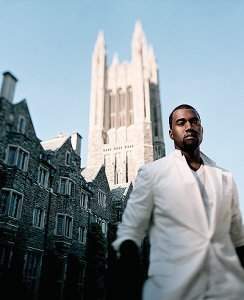 West’s mind-blowing success has helped pave the way for popular beat-makers like Danger Mouse, one-half of the summer’s hottest act, Gnarls Barkley. Also stirring buzz is Pharrell, best known as a collaborator with the likes of Timberlake and Snoop Dogg. He released his debut solo album to the tune of 142,000 copies sold in the first week. And rap/pop producer Jermaine Dupri has not only worked magic with Mariah Carey, Usher and girlfriend Janet Jackson, but also released two solo projects as JD.

Producers are getting so much attention these days that record labels aren’t just finding master tinkerers for their artists; they’re looking for personalities who might one day release albums of their own.

Labels think outside the disc by using high-profile beat-masters any way they can. For example, Timbaland’s work with Furtado became the perfect marketing gimmick. “Timbaland has almost more credibility than Nelly so pairing them up made a lot of sense,” says Al-P, a Toronto-based producer who’s worked with everyone from Bloc Party to Jay-Z. “Timbaland made the new album way cooler so it’s definitely going to help out, especially in America.”

Alper has no problem using a choice producer to help push a disc. With so much competition clogging the music industry, anything that’ll bring in the big bucks is fair game. “It’s tougher and tougher to make noise with every band having a MySpace page. Anything an artist can do to help stand out, more power to them.” 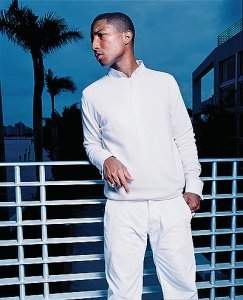 Fresh Produce
The hip-hop world is the unofficial headquarters for producers going solo — think Dr. Dre, Pharrell, Wyclef Jean. But besides a few legendary mixers like Steve Albini, George Martin and Phil Spector, rock ‘n’ roll hasn’t figured out how to market the guys behind the scenes. “You’ve got four guys who play instruments and look good and that’s what you want in a rock band,” says Al-P. “Maybe they can write songs or maybe they can’t, but that’s where the producer comes in. It’s way more behind the scenes.”

That contrast between the rock and hip-hop scenes highlights one of the crucial trends ripping through the music business: proactive producers are redefining what they can be. Rock producers might want to stay in the shadows, but it’s the hip-hop masterminds who also want a cut of the publicity pie. Hanging out with sound engineers is a far cry from hanging with groupies.

With more producers grabbing the spotlight you’d think some envious artists would complain, but no one seems to care. In fact, a lot of people have more respect for brilliant producers than many of the hacks churning out by-the-book punk pop. Yes, Kanye West is an arrogant, self-centered egomaniac, but why diss him for wanting to market his signature sound himself? In Nelly Furtado’s case, it’s a lot easier listening to her faux-dance R&B when a luminary like Timbaland is in control. It’s just a shame she didn’t get a hold of a great producer earlier — imagine how big Furtado would’ve been if Dr. Dre had his way with “I’m Like a Bird.”