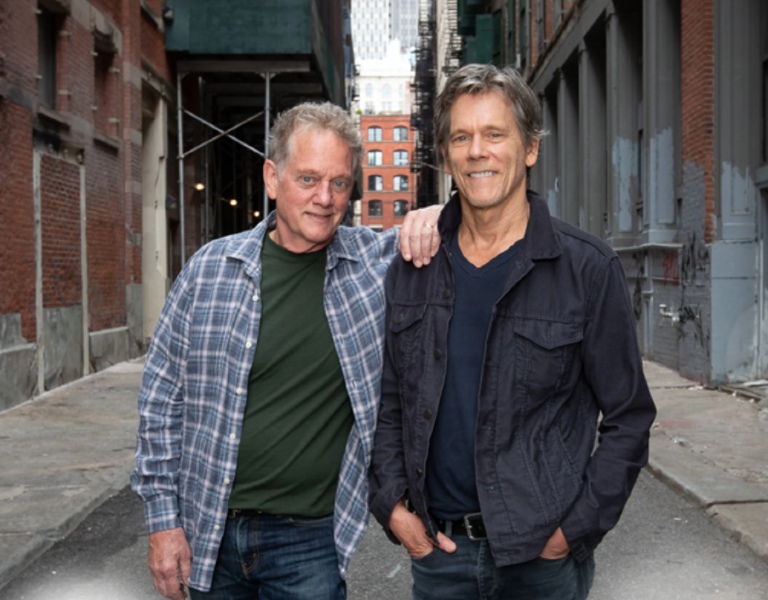 The Bacon Brothers release their soaring “British Invasion (Remix).” The song was written by Michael Bacon and Kevin Bacon, and it was subsequently produced by Joe Nicolo. It is upbeat, vivacious, and enthralling.

Superstar duo The Bacon Brothers know to strike when the iron is hot. Cemented in both the rock and Americana genres as successful lyricists and seasoned performers, The Bacon Brothers are following up their latest single “In Memory (Of When I Cared)” with a remix of a previous release.

The song’s title cleverly calls to mind real-world events, while the track itself reveals that it’s actually about a pretty British girl who “invaded [the narrator’s] soul.” With clever references like “goodbye to my blue suede rock and roll,” this track highlights some of the most iconic and entertaining stylings that have peppered the rock genre since its inception.

Cheeky laughter at the opening and close of the song ties the track together while foreshadowing and then reminding the listener of who, not what, the “British Invasion” truly is. Who could resist that “black eyeliner and a Twiggy skirt” the titular invader sports? Those UK girls are, evidently, some irresistible people.

Releasing the new single in conjunction with Sound Mind Network was an easy choice for Kevin and Michael, who are proud supporters of the non-profit’s mission and work closely with producer and co-founder Joe Nicolo. The single has been released under the major label Heart Songs Music Group, which will be releasing additional music with the non-profit in 2022.

The duo has also recently been announced as the headliner of the Sound Mind Network Music Festival on June 26, 2022, at Bally’s Atlantic City to further the mission of the non-profit.

“British Invasion (Remix)” is available on digital service providers by clicking here. It garners two thumbs up. The Bacon Brothers are like fine wine, where they only get better with age.

The Bacon Brothers have spent the past quarter-century in a creative whirl, funneling their shared DNA into a genre-bending sound. They call that sound “forosoco” — a blend of folk, rock, soul, and country influences, delivered by two songwriters who were born to collaborate — and it’s taken the siblings across the world, from shows in Japan to performances at American landmarks like Carnegie Hall and the Grand Ole Opry.

Joined by songwriting sensation Desmond Child, producer Joe Nicolo, and other collaborators, The Bacon Brothers veer from the stripped-back soul of “Dark Chocolate” to the pop-friendly modern rock of “In Memory (Of When I Cared),” proving their staying power once again.