There is definitely something Joni Mitchell-esque about Carol Lipnik and her angelic singing voice, though this Coney Island native, who released her fifth studio album Almost Back to Normal in February last year, is so much more than just another Mitchell clone.

“I have a three-week residency coming up in March at Joe’s Pub; three Thursdays at seven P.M. – March 3, March 10 and March 17,” notes the star, whose music also has an air of Kate Bush about it. “We will be playing mostly songs from Almost Back to Normal and then some older songs and some brand new songs.” 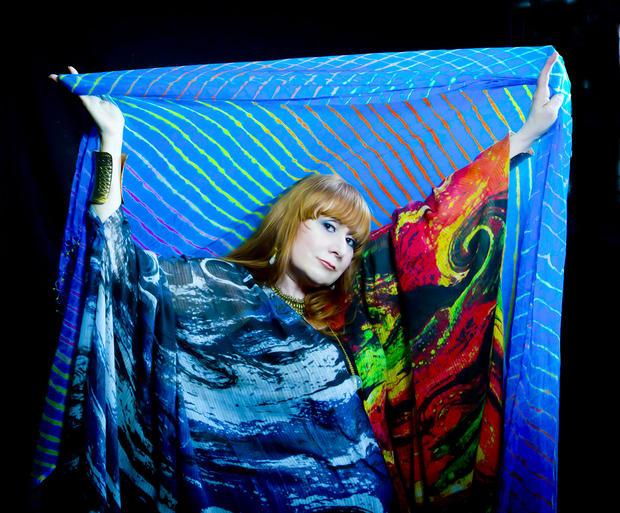 Carol Lipnik
Albie Mitchell
Advertisement. Scroll to continue reading.
“Almost Back to Normal is a collection of songs that I think of as talismans or shields to take with you into battle,” muses Carol, explaining the thinking behind the title – “the battle being today’s increasingly uncertain world. The lyrics allude ominously to subjects like climate change and income inequality.

“I grew up in Coney Island and I’ve always been attracted to glittery desolation and decay, and that feeling – that aesthetic – kind of fills up my music. I had some minor knee surgery a couple of years ago and a friend asked me how I was doing and I said, ‘Well I’m almost back to normal.’

“I said, ‘That would make a great song title,’ so I went and wrote the song. The song is open about the meaning, but I think it touches definitely on climate change – and the fact that ‘normal’ is a word that can have a lot of different meanings to different people.

“‘Normal’ is kind of a tyrannical label for something – like who wants to be normal? Never aspire to be normal by any stretch of the imagination, but if you’re in pain, then normal could represent just walking around and thinking of something other than your pain.

“But I think the idea of ‘almost back to normal’ is no one’s ever gonna be back to normal. I mean what is normal? Just being able to walk around and listen to birds and look at the sky and not think, ‘Oh, my knee hurts’ could be some form of normal!”

Revealing why she chose to do the residency at Joe’s Pub – and what it is she finds special about that particular space – the colourful figure states, “Oh, well Joe’s Pub is a wonderful venue in New York City. It’s the Public Theatre and it’s heavily curated. The best artists in the world perform at Joe’s Pub.”

Carol, whose pianist Matt Kanelos plays an 1895 Steinway grand piano on the new CD, addresses the dark humour in her music: “Once again returning to the aesthetic of Coney Island, there’s an element of vaudevillian humour – like a deadpan clownishness because the songs are deadly serious but they’re very funny at the same time… It’s a contrast. My whole aesthetic is about light and dark together.”

The pensive artiste has a great deal of affection for all the songs on her latest long-playing effort, but there are one or two that especially stand out. “There’s a song called ‘The Oyster and the Sand,’ which traces the journey of a pearl that lives inside an oyster, but it’s also a metaphor for a co-dependent relationship.

“It’s strange and whimsical, but it’s very dark when you analyse it. I also love the song ‘The Things That Make You Grow,’ which is definitely like a battle cry for the misfit, for the weaker people. The metaphor is putting your antlers on. The weeds get trampled on and the weak get trampled on, so sometimes you have to put your antlers on, kind of thing.”

“Like when you’re sitting by the river or ocean and you’re looking out and it puts your mind into this oneness with emptiness. It’s makes you realise it’s not about you – it takes you out of yourself. So my goal is to take people out of themselves and into the cosmos of emptiness.”

Almost Back to Normal is out now and can be purchased here.

For more information on Carol Lipnik, visit her official website.