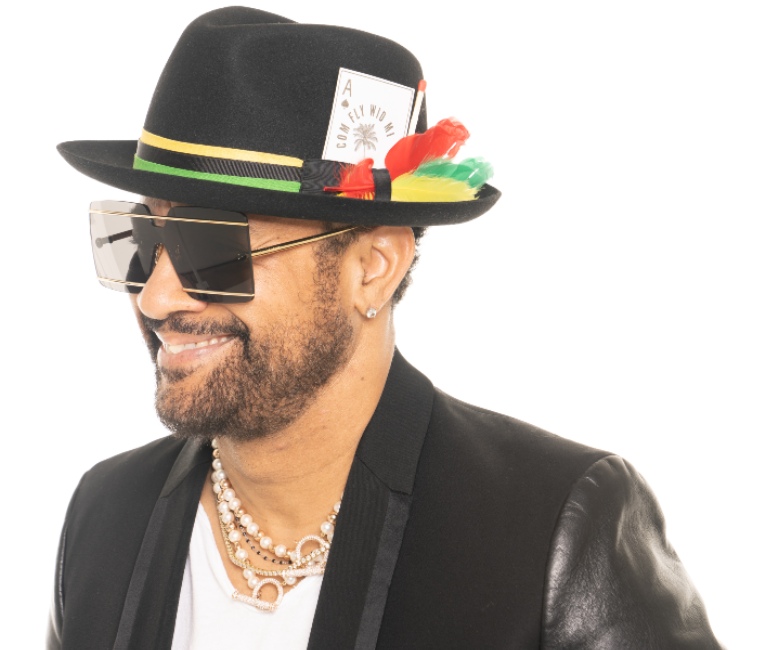 On May 26, Shaggy had an album release party at the historic Blue Note Jazz Club in New York City, which was hosted by Sting. This showcase was well-received. “We are only doing songs from the album,” Shaggy said.

“We will probably do every single track. We will probably do some of them more than once and nobody will notice. It’s with a full band and we have a horn section, guitars, the whole shebang. I might even get a little help from Sting,” Shaggy said prior to the show.

“That’s Life,” is the first single off the album, “Com Fly Wid Mi.” This record features the dancehall and reggae icon singing the Frank Sinatra songbook in a reggae style.

The music video for “That’s Life” was directed by Jay Will (who has worked with Sean Paul and Spice), was also released and it offers an intimate, behind-the-scenes look at the “unexpected pair” while making the album.

Shaggy listed “Luck Be a Lady” and “That’s Life” as his personal favorite tunes on the album. “I have been rehearsing them over and over, and I’ve been singing ‘That’s Life’ a lot too,” he said.

“I really get into each song that I sing on this album,” he added. “I jump to the opportunity to do anything with Sting. It’s just fun, we enjoy ourselves.”

Sting and Shaggy are managed by The Cherrytree Music Company. Shaggy listed “Fields of Gold” and “Every Breath You Take” as his personal favorite Sting songs.

As the only diamond-selling dancehall and reggae artist in music history, Shaggy has sold over 40 million albums in addition to landing eight singles on the Billboard Hot 100 charts and seven albums on the Billboard 200 (including four in the Top 40).

A pioneering reggae and dancehall icon, Shaggy has received two Grammy Awards and is among the Top 3 streamed reggae artists of all time on Spotify (along with Bob Marley and Sean Paul). He has amassed over 800 million streams across his catalog.

He has collaborated with, written, and produced records for the most renowned and respected reggae musicians in the world including Toots and the Maytals, Barrington Levy, and Maxi Priest, as well as mainstream artists such as Sting, Cardi B, Janet Jackson, and Chaka Khan, among others.

*Including his viral sensation “Banana,” with fellow Jamaican artist, Conkarah which garnered over two billion streams and spawned over 50 million Tik Tok videos with over five billion video views for the #bananadrop challenge, Shaggy has had a massive hit for four consecutive decades.

In collaboration with Sean Paul and Spice, the Queen of Dancehall, “Go Down Deh” debuted at No. 1 on the global reggae music charts. Shaggy also co-wrote and executive produced Spice’s debut album, “TEN,” on VP Records which received a Grammy Award nomination for “Best Reggae album.”

Following his ‘reveal’ as Space Bunny on Fox’s The Masked Singer, Shaggy released a new, modern version of “Jump in the Line,” a song he performed earlier in the series.

On May 11 in New York City, Shaggy was honored by the Third Street Music School Settlement – the nation’s longest-running community music school – with the “Distinguished Artist” award.

*Following the Grammy Award for their collaborative album, 44/876, rock icon Sting and Shaggy have joined forces again for Com Fly Wid Mi. The new album, produced by 17-time Grammy Award winner Sting, features Shaggy singing the Sinatra songbook in a reggae style and will be released May 25 on all digital platforms. To celebrate the album’s release, a special limited access, one night only performance will take place at the Blue Note Jazz Club in New York City on May 26

On May 28, Shaggy received an honorary degree from Brown University and delivered the honorary degree oration at their Undergraduate Class of 2020 Commencement Ceremony. It may be seen below (around the 1:47:32 mark).

The entire Brown University Undergraduate Class of 2020 Commencement Ceremony Livestream may be seen by clicking here.

Shaggy hosts his own weekly radio show, Shaggy’s Yaad, on SiriusXM FLY featuring a wide range of contemporary, rare, and classic tracks spanning hip hop, dancehall, and reggae genres with insights from Shaggy about the musical history of his Jamaican homeland and its global impact.

A couple of lesser-known facts are his altruistic endeavors (he established the Shaggy & Friends foundation which benefits the Bustamante Children’s Hospital in Kingston; the only English-speaking children’s hospital in all of the Caribbean) and that he served in the U.S. Marines for four years (including two tours of duty in the Middle East as part of Operation Desert Storm).

On the tite of the current chapter of his life, Shaggy responded, “Gratitude.” If he were to have any superpower, Shaggy revealed that he would be “Kryptonite.”

Shaggy defined success as “changing people’s lives, as long as we change the course of their lives positively.”

“Com Fly Wid Me” sung by Shaggy (produced by Sting) is available on digital service providers by clicking here. “I want the fans to get smiles out of this album,” Shaggy concluded.