More than a week after the pop music star watched a baseball game in Seinfeld’s box seat, the comedian has spoken out and he is not happy. He doesn’t understand why Lady Gaga was upgraded to sit in his luxury box after she berated fans during the fifth inning, displaying a double middle-finger salute. Apparently, she didn’t like her seats, saying they were too close to photographers.

“This woman is a jerk. I hate her,” he said in a radio interview with WFAN. “I can’t believe they put her in my box, which I paid for.”

After she argued with fans for an inning, while wearing a bra bikini bottom, Lady Gaga reappeared in Seinfeld’s luxury box. Seinfeld is a notorious Mets fan.

“You give people the finger and you get upgraded? Is that the world we’re living in now?” Seinfeld said in the interview. 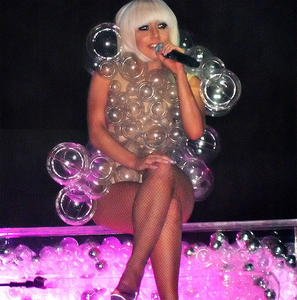 He went on to blast Gaga, spicing his tirade with a flourish of humour. “I don’t know what these young people think or how they promote their careers. I’m older, I’m 56. I look at Lady Gaga the way Keith Hernandez watches these kids when they pull the pocket out, they wear the inside-out pocket. … Do you think he understands that? He can’t understand that. That’s a new game, that’s kids.”

The Mets organization apologized to Seinfeld for the incident, saying: “We deeply regret that Jerry Seinfeld has been associated with this matter and have apologized to him.”

Lady Gaga didn’t just cause a stir at Citi Field. Days later she attended a New York Yankees game, wearing no pants and unbuttoning her shirt to reveal a lacy black bra.