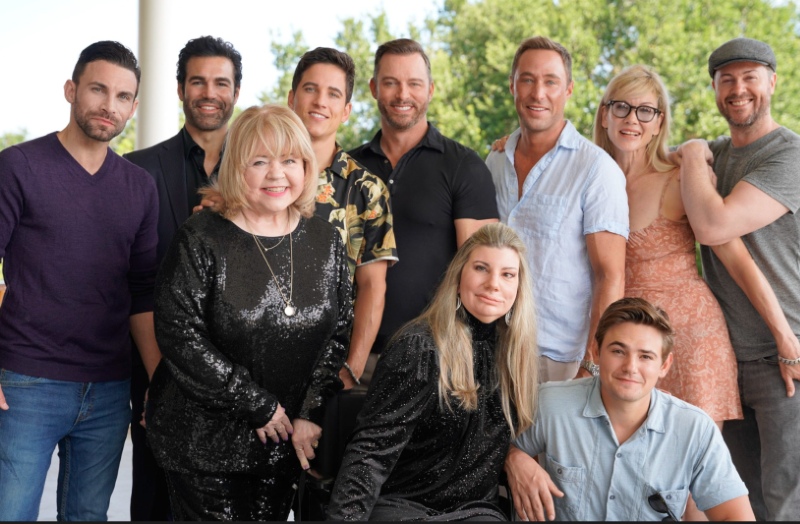 On May 14 and 15, the “Samantha’s Friends” annual fundraiser took place at the elegant Lakewood Ranch Golf and Country Club in Florida, which benefits the Southeastern Guide Dogs. This year’s event had a James Bond theme to it with a true “Casino Royale” fashion.

This event was co-hosted by Sammy Lee Bozza, Alice Bozza, and Craig Bozza of “Samantha’s Friends.” This nonprofit charity has been in existence for the last 26 years and has partnered with the Southeastern Guide Dogs, where they have provided service canine support to individuals in need, which include the visually impaired and veterans suffering from PTSD.

Margaret Mead once said: “Never doubt that a small group of thoughtful, committed citizens can change the world; indeed, it’s the only thing that ever has.” This quote applies to everybody that made Samantha’s Friends a true success this year.

They were joined by nine daytime actors (all of which are known for their acting work on “Days of Our Lives”): Eric Martsolf, Kyle Lowder, Mike Manning, Stacy Haiduk, Jordi Vilasuso, Patrika Darbo, Dan Feuerrigel, Erik Fellows, and Carson Boatman. Three of these aforementioned actors (Martsolf, Haiduk, and Vilasuso) are nominees at the upcoming 2022 Daytime Emmy Awards.

This marked the first time that actors Carson Boatman, Dan Feuerrigel, and Erik Fellows attended this poignant event, and hopefully, it isn’t their last one.

Actors Eric Martsolf and newcomer Carson Boatman displayed their rich, resonant vocals, while Patrika Darbo and Stacy Haiduk were impressive with their own witty and irresistible skits.

“Our 26th year of ‘Samantha’s Friends’ was a huge success and the best one yet,” Sammy Lee Bozza exclaimed. “Thanks to all our supporters, many who came to donate their time and talent year after year to help this very worthwhile charity. We had gorgeous service canines that the entire crowd went wild for. Awesome and amazing celebrities and entertainment. Thank you again to all our dedicated supporters. My heart is so full right now it’s going to explode.”

Aside from the actors, Karen Conkel and her beloved dog Levi were also present at the event, as well as U.S. veteran and musician Russell Smith with his dog Mustang, as well as Gwenn Villa raising Pepper, and Sandy raising Bonnie.

The emotional highpoint of the day was when Russell Smith shared his moving life story and how his service dog Mustang essentially saved his life and transformed it exponentially for the better. One should have had the Kleenex handy for that. His trumpet performance of the timeless James Bond tune “Goldfinger” was just as noteworthy.

Southeastern Guide Dogs began in 1982 with a single vision: to help those who cannot see. Today, they also serve veterans with disabilities and children with significant challenges. They are an internationally accredited guide and service dog school that is headquartered in Palmetto, Florida.

These guide dogs transform lives by creating and nurturing extraordinary partnerships between people and dogs. They help improve and positively impact the lives of people with disabilities and military members that have been experiencing PTSD. It is evident that the Southeastern Guide Dogs were the true stars of the event.

The organization operates the most advanced training facilities of any service dog organization in the world. Their experts breed, raise, and train elite working dogs and they now have over 1,200 dogs under their auspices. For more information on the Southeastern Guide Dogs, visit their official website.

Emmy winner Mike Manning hosted a “James Bond Trivia” segment, which was engaging and fun. After a live auction, which was well-received and hosted by all nine actors, raffles were drawn and prizes were given out. The soap actors subsequently took the time to interact with the fans, as well as pose for photos and sign autographs for them prior to the conclusion of the event.

Overall, the 26th annual “Samantha’s Friends” was such a beautiful, vibrant, and heartwarming community. It is highly worth checking out if one is ever in Lakewood Ranch, Florida. It raises money for a wonderful cause (the Southeastern Guide Dogs) coupled with the presence of some of daytime’s biggest and most well-loved names. The weather cooperated, and it was a celebration of life, the dogs, and daytime TV.

Kudos to Sammy, Alice, and their entire family and friends/supporters, for putting on such a remarkable event that was able to put a smile on so many people’s faces, and that was impeccable.

By the time it was over, this journalist wanted to adopt his own Golden Retriever, but the only problem was that it would have been unable to fit on his airport carry-on bag.

To learn more about “Samantha’s Friends,” check out its official website.