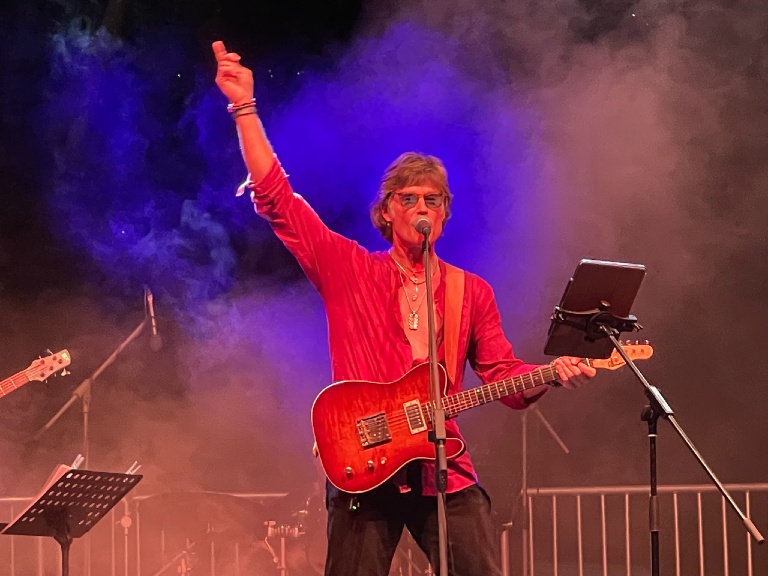 Veteran producer and actor Ronn Moss (“The Bold and The Beautiful” fame) chatted about his new film “Surprise Trip.”

Can you tell us about your latest movie, how did it come about and how was your experience with that?

My latest movie is a romantic comedy called “Surprise Trip.” We filmed it in Puglia, Italy. I wrote this story with my producing partner, Tiziano Cavaliere, while we drove from south to north, north to south Italy many times for appearances and concerts that I would perform with my Italian band The Men in Black. I wanted to make a postcard for this lovely part of southern Italy called Puglia.

I used only Pugliese actors who spoke the true dialect of this region. So yes, there are subtitles in this movie. I was very happy to have one of Italy’s most loved iconic comic actors, Lino Banfi, in our movie. It was quite the challenging experience making this movie because we became determined to not let the “shutdown” of 2020 stop us from achieving this.

I’m very proud of this cute movie we made. We had several theatre premieres around the different regions of Italy and it’s now released in Italy, on Amazon Prime and Sky Prime, and some other satellite providers.

Can you tell us about your latest hit song… what inspired you to write it and how did it come to fruition?

I’ve had a few over the last couple of years being in Europe most of the time. During 2020, being forced to stop performing the project I was doing in Belgium, again for the stupid lockdown, on my wife, Devin’s recommendation, I spent my time recording a new collection of songs that I called “Lockdown Lover.” That did very well. Then, still in Belgium, I wrote a new song called “Dreaming in Color” as a duet with a lovely Flemish singer named Ella Luna. She also sings in French, so we translated my lyrics for her into French.

This song went to No. 1 on the Belgium charts. Feeling our oats because of this, we then recorded another duet. This would be our version of Leonard Cohen’s Hallelujah. This also went to No. 1. So… feeling even more oats… I wrote yet another song called “Will You Miss Me.” This song literally came to me in a dream. I woke up and wrote it down.

Another duet with Ella Luna. We are finishing the music video for this now and then it will be released. If anyone wants to see any of these, they are on YouTube under my name. They are also on Spotify for listening. So now the latest. Tiziano, myself, and another friend wrote our homage to Puglia called “Vado a Vivere in Puglia” (I Want To Live in Puglia). It’s out now on Spotify. It’s gaining a lot of attention and just last night, Tiziano and I, sang it live on stage for a large crowd (5,000 people) festival near Lecce, also in southern Italy.

You are touring Italy right now… what can your fans and supporters expect?

I like doing a combination of original songs as well as songs I’ve always liked. Classic rock and ballads. Songs I’ve grown up with or artists I’ve always liked. But in Italy, I also found a few Italian singer-songwriters that really appealed to me, so I learned a few songs in Italian. I find singing these songs to be very emotional for me. And apparently, for my Italian audience as well, which is so cool.

Can you tell us about your experience in ‘Studio City’ and working with Sean Kanan?

Doing that stint on “Studio City” was great. It started out being one scene and grew into a few more that were completely improvised by me and Sean. He’s very talented and fun to work with. I love what he and Michele Kanan have made with that show.

More music tours in Europe. Another film, a western, is to be filmed in Europe and the US. A sequel to Surprise Trip the movie. When I return to the US, we’ll have some concerts planned as well using my US-based group called Ronn Moss’ Player. The original Player from the ’70s is defunct now. There’s also tending to the production and marketing of my Ronn Moss Wine produced in Puglia. Very proud of this wine.

What is the title of the current chapter of your life?

For me, success means doing things that make you happy. Success can be in small steps or large leaps. Success is often measured by failures along the way. Not letting any failures stop you, learning from them, that is a success.

What would you like to say to your fans that have been on your journey?

I’d like to say a huge heartfelt “thank you.” Many have been on this journey for many years. Many have recently joined in the last couple of years. I have a wonderful respect for you all and look forward to seeing where it goes from here.