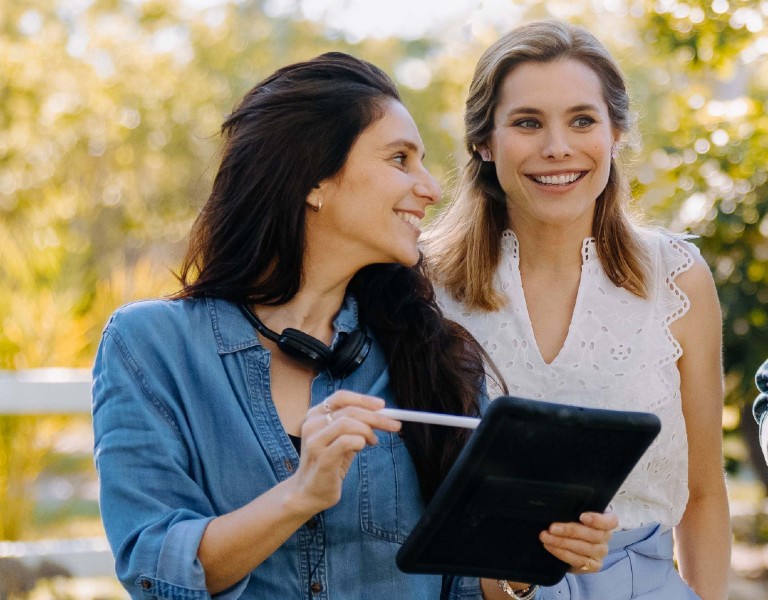 Filmmaker and director Rogue Rubin chatted about her new film “Love In Bloom,” which premieres on August 27 on Great American Family.

I am thrilled romantic comedies have officially returned to the screen and people love them as much as I love making them. ‘Love In Bloom’ was such an exciting project to direct in Queensland – home to some of the most beautiful scenery and animals in the world. Being able to direct a film is always a gift that I never take for granted – a film set is a place I consider sacred.

What was it like working with leads Susie Abromeit and Julian Haig?

Susie Abromeit and I have been close friends for years and I specifically created the character of Amelia for her. So much of Susie is in the character – silliness, kindness, warmth, and a little bit of throwing it all away for love.

I also asked LoveShackFancy to supply most of the main dresses Susie wears – which further highlight not only the character of Amelia but Susie – stylish, feminine clothing that has so many elements of romance attached to it.

I met Julian Haig for the first time on this project and was so excited to work with him and watch him bring Grayson to life. I knew Grayson had to be a vet because the only way Amelia would stay was for a selfless man. And, Julian encapsulated all these incredible characteristics which brought Grayson alive.

It would be wrong of me not to mention the incredible ensemble cast that support both of them – Mr. Poppy is played by an  Australian acting legend Steven Tandy and Mrs. Poppy, Monettee Lee, had me regularly crying with laughter.

Lin Yin who played Piper brought so much professionalism and giggles to her role and the exceptional Artin John – who played Dr. Peter made an enormous impact with his comedic timing.

As a director, we get a strong depiction in our minds of how we would love to see a character brought to life, and  Joey Viera who played Enrique not only brought my imagination to life but made it even more fabulous. Melinda Vidler and Jason Wilder gave us another perfect love story.

What motivates you each day as a filmmaker?

I am motivated every day as a filmmaker – and person – to tell stories that not only engage and educate us but make us better people. The story of “Love In Bloom” reminds all of us that the most important things in life money cannot buy are “love, family, and friends.”

How does it feel to be a filmmaker in the digital age? (Now with streaming and technology being so prevalent)

Being a female filmmaker in the era of streaming means that we are constantly being challenged to embrace new forms of technology but it also means there are so many different outlets.

With the huge number of streaming services, it is harder to make films that capture people’s attention – so when you find a special film that you think will touch a few hearts you have to hold onto it tightly.

What is your advice for young and aspiring filmmakers?

If someone is thinking of being a filmmaker you need to know it is all-consuming and that you will never be able to have a work-life balance.  But, if you want to change the world – I truly believe this is the way – and do not let anyone or anything stop you. Believe in yourself as is inner strength is the most important motivator.

How did it feel to direct Conner Floyd in his first commercial?

I love directing commercials as it affords me the luxury to meet incredible up-and-coming talent and working with sports and TV legends. For this particular commercial everyone was an unknown – so I auditioned a lot of different types of people. The moment I met Conner with his Southern drawl and incredible charisma I knew he was going to succeed as an actor.

I often find myself suggesting to young actors other professions – but I had no doubt Conner was going places. What we have seen from Conner, so far,  is only the beginning – he has an incredible career ahead of him and I am so blessed I got to direct him “fresh off the boat” and I really look forward to directing him again in a feature!

Wow, the word “success” is a huge word! To me, success is about personally being proud of my work,  being happy, and making others truly happy! I believe if we are not doing something that emotionally fulfills us then very quickly it becomes a “chore”.  I believe life is too short not to be happy and love what you are doing and love the people you are working with.

What would you like to tell our readers about ‘Love in Bloom’? What’s the one thing you want them to get out of it?

“Love in Bloom” – is a true homage to the classic romantic comedy. I wanted the viewers’ eyes to be as fulfilled by the beauty on screen – which includes the amazing costumes, unbelievable artistic design, cakes that make you drool, Australian wildlife, incredible Australian destinations, and more.

Your ears will be listening to an original score by Brett Rosenberg (my long-time musical collaborator) who shot to fame for his score for Half Light starring Demi Moore – so I really hope the audience gets a kick out of how the music adds to the film!

I wanted to introduce an international audience to my dear friend and colleague famous Australian illustrator Angie Rehe who personally drew the images Amelia draws as well as so many small touches you see including art on the walls.

I want audiences to not only fall in love with the beautiful story of Amelia Hart finding herself but to have all their senses captivated.

Worst case – I threw a baby Joey in – because if you cannot love a Baby Joey what hope is there?

To learn more about filmmaker and director Rogue Rubin, visit her official website.