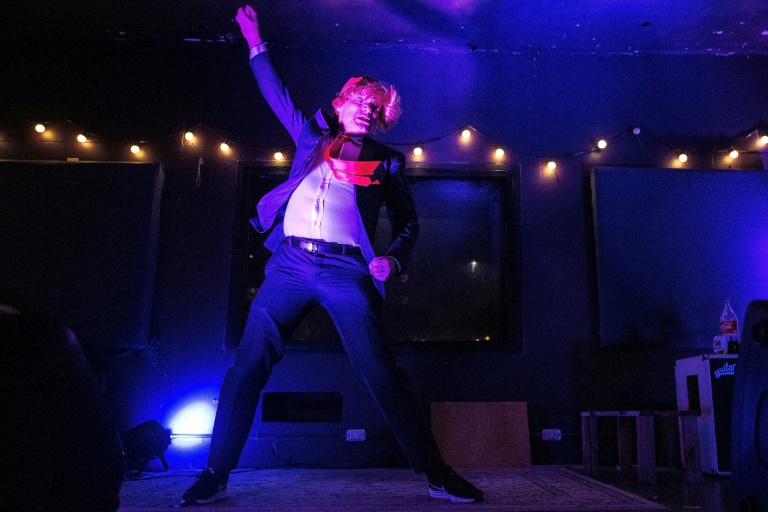 What happens when Donald Trump, a Bangkok moto-taxi driver, and a Squid Games contestant take the stage in a Bangkok bar late on a Saturday night? It can only mean one thing: an air guitar battle for peace.

The cosplaying individuals were gathered at the second annual Thai air guitar championship for the chance to represent Thailand in the beloved World Championships in Finland later this year.

The hallowed international event, founded in Finland in 1996 to promote world peace — “hold air guitars, not guns” is the tongue-in-cheek motto — has given rise to good-natured and over-the-top competitions around the world.

“This is going to be the greatest thing you have never seen,” roared co-host and organiser Jacob “Airlectic Eel” Conga, bouncing across Brownstone venue’s stage following his exuberant performance to warm up the crowd.

For the first round, each of the nine contestants gave a 60-second performance marked by three judges with the top five progressing to the second and final round.

Contestants were marked on technical ability, stage presence and “airness” — “the ‘je ne sais quoi’ of air guitar, when it transcends a performance and becomes a true piece of art,” said Conga.

The eccentric and electric sets, performed to a medley of genres and tastes from Rihanna’s “Shut Up And Drive” to self-composed Thai rock-pop, eventually saw the strutting and pouting “Trump” win the night, despite fierce competition.

“He made Thailand great again, for sure,” judge and comedian Charles the French said.

Rob “Donald Trump” Palmer, who when not performing air guitar solos has lived and worked in Thailand for the past eight years, said the evening was “fantastic”.

Explaining his costume, most of which was chaotically thrown to the crowd during the final round, he said: “if you have to do this, you got to do something crazy, so let’s do the craziest man on the planet, to do Trump.”

Having won the 5,000 baht ($141) prize, and a trip to Finland to represent Thailand, Palmer grinned and said: “For most of us, it’s probably the only chance you have of becoming a national champion or even a world champion — so you got to do it.”

France, a 22-year-old spectator who gave only his nickname, had come along to support his friend but was totally unprepared for the “crazy” spectacle.

“I played guitar before and I do some air guitar, but I’ve never seen air guitar like this.”

In this article:airguitar, Music, Offbeat, Thailand