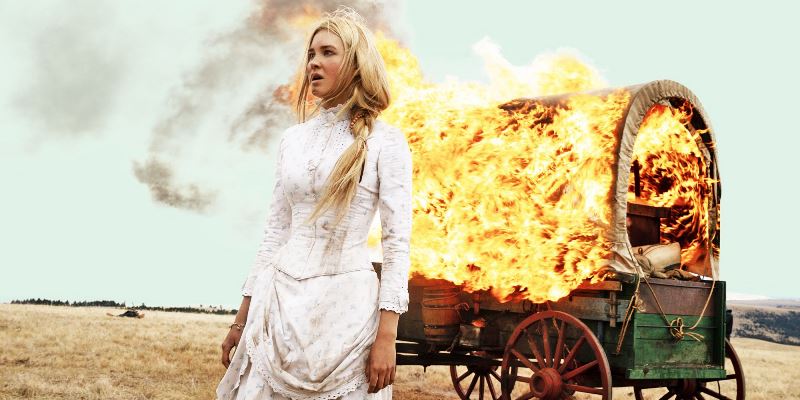 This week’s releases include a wrenching origin story; a stunning collector’s set; and a reimagined thriller.

1883: A Yellowstone Origin Story (Blu-ray)
The miniseries follows the Dutton family as they embark on a journey through the Great Plains. It is a stark retelling of Western expansion, and an intense study of one family fleeing poverty to seek a better future in America’s promised land — Montana.

Everyone knows pioneers had an exceedingly difficult time travelling west to claim land and build a life on the frontier. However, there have been few other fictional narratives that portray this journey with such raw sincerity and brutal honesty. Shea Brennan (Sam Elliott), alongside one of his former soldiers, Thomas (LaMonica Garrett), agrees to take a group of European immigrants along the Oregon trail, which is one of the most dangerous endeavours anyone could embark on at the time, but even more so for inexperienced settlers. Shea recruits James Dutton (Tim McGraw), whose taking his family west, to help him manage his helpless company. James’ wife is portrayed by McGraw’s real-life wife, Faith Hill, but the heart of the narrative is the Dutton’s daughter, Elsa (Isabel May), whose free spirit and stubborn curiosity grips audiences as she determines to live her best life regardless of what anyone else may think. Another element of note is creator Taylor Sheridan’s treatment of the Indigenous people in the series, who are not just painted as stereotypical villains.

Special features include: “Behind the Story” for each episode; “A Land of Peril & Wonder: The Journey of 1883”; “From Cast to Cowboys: Creating the Pioneer Spirit”; “1883: The Road West”; and “Inside 1883.” (Paramount Home Entertainment)

Belle [Collector’s Edition] (4K Ultra HD & Blu-ray)
Suzu is a shy, everyday high school student living in a rural village. For years, she has only been a shadow of herself. But when she enters “U”, a massive virtual world, she escapes into the online persona of Belle, a gorgeous and globally-beloved singer. One day, her concert is interrupted by a monstrous creature chased by vigilantes. As their hunt escalates, Suzu embarks on an emotional and epic quest to uncover the identity of this mysterious “beast” and to discover her true self in a world where you can be anyone.

The narrative that unfolds within the fantasy world has parallels with the fairy tale, Beauty and the Beast. Belle seeks out the misunderstood Beast to try to understand his rage, while the vigilantes are only looking to destroy him. Belle becomes a different person in the virtual world, but it’s just a freer version of herself — the beautiful singing voice still belongs to Suzu, even if she doesn’t think anyone knows it’s her. The story in the real world, however, is much more complicated and unexpected. As everyone tries to find the real identity of the Beast, what they find is a very dark and sad reason for his behaviour that pushes Suzu to act bravely outside the internet — and she does it alone, for some unknown reason. This upgraded boxset complements the film’s animated beauty, highlighting it in the art cards, the collector’s book and all the additional artwork incorporated in the release. This edition will delight fans as it emphasizes the picture’s vibrancy and passion.

Cat People [Collector’s Edition] (1982) (4K Ultra HD & Blu-ray)
Irena (Nastassja Kinski) is a beautiful young woman who discovers love for the first time only to find that the experience brings tragic consequences. The tremendous passion of this woman’s first romantic love is so strong, however, it bypasses the chaos around her — including the extraordinary demands of her brother (Malcolm McDowell) — as it pushes her on to her own bizarre destiny.

Although this movie shares a title with the 1942 film of the same name, the two are only very loosely connected. This picture embraces the horror element of the narrative and presents it in a highly sexualized picture filled with sultry looks and repressed desires. Irena’s brother moves with catlike precision, looking at her the way a sibling shouldn’t and insisting her presence is the change he needs to be a better man. In the meantime, she finds herself drawn to a zoologist (John Heard) who’s trying to understand how a murderous black leopard got loose in the city. Sex is inherent to the story and director Paul Schrader doesn’t shy away from his attractive cast’s natural talents. The one parallel between the two similarly titled films is a pool scene, which is portrayed with increased intensity in the latter picture.