It doesn’t take much effort to discern people’s expectations of the future are bleaker than they were 50 or even 30 years ago. The images of utopian cities with flying cars and crystal towers are long gone. The looming possibilities of so many destructive forces — from war to aggressive weather to disease to out-of-control technology — make it difficult to be optimistic. But what is that loss of hope doing to the prospective future? Tomorrowland explores both sides of the coin, while providing the ideal solution to the problem.

Casey (Britt Robertson) is a dreamer, learned from parents who equally believed anything is possible. So when she finds a novelty pin that seems to have the power to transport her to another world, she not only believes it but is determined to find a way to stay there and explore it. Frank (George Clooney) is an ingenious inventor who used to be exactly like Casey — until reality punched him in the gut. Now he lives in seclusion, using his innovative gadgets to keep out the rest of the world. However, Frank creativity and Casey’s ability to simply know how things work are humankind’s only shot at preventing a terrible prophecy from coming to pass.

Developed in reverse order, this is a movie actually inspired by a Disney theme park attraction of the same name rather than vice versa. The parallel world into which Casey ventures is spectacular, illustrating the picture is definitely not wanting in the imagination department. And Brad Bird‘s history with engaging, whimsical stories makes him the ideal choice to direct this fanciful adventure. From transportation to architecture to fashion, everything about this civilisation represents incredible advancements in every facet of life. Even the technological evolution of this already enhanced society is demonstrated by viewing it during Frank’s childhood and decades later during Casey’s recruitment. 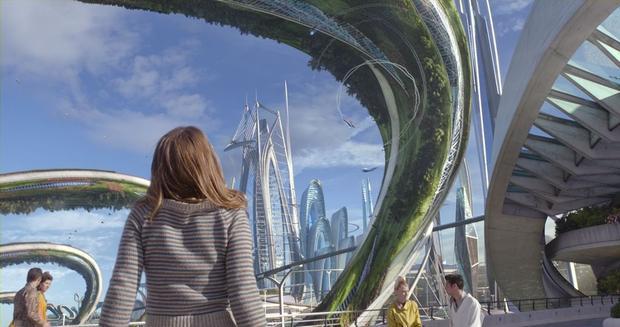 While the depictions of the technology and stunning city are immaculate, the same is not true of the film’s narrative. The opening is more complicated than would seem necessary as Frank and Casey squabble about where they should begin the story. This results in a lot of unfinished thoughts and sequences, time jumping and general disorder; and even though it’s amusing, it’s not a stellar start to the fantastic tale. Clooney doesn’t officially enter the narrative until nearly the midpoint, leaving Robertson to carry the picture while everyone in the audience wonders when the leading man will appear. Nonetheless she’s charmingly pure of heart without being naïve or inept — a combination not often exhibited in heroic female characters. Conversely Clooney is comically curmudgeonly at first, but his heart grows two sizes before the end. Supported by Raffey Cassidy who plays a child-sized recruiter, and Hugh Laurie, the conservative leader of tomorrow, the actors pull together what can otherwise seem like a half-baked script.

The film’s conclusion includes a dramatic action sequence to save the world and defeat the evil mastermind behind its impending doom. However before being beaten, the villain delivers a rather accurate yet disheartening monologue about humankind’s resignation and ultimate embracement of the end of days — and this is in spite of many of the contributing factors being not only detectable but preventable (cue the climate change debate). This moment is pretty heavy handed, but the point it makes is still mostly valid.