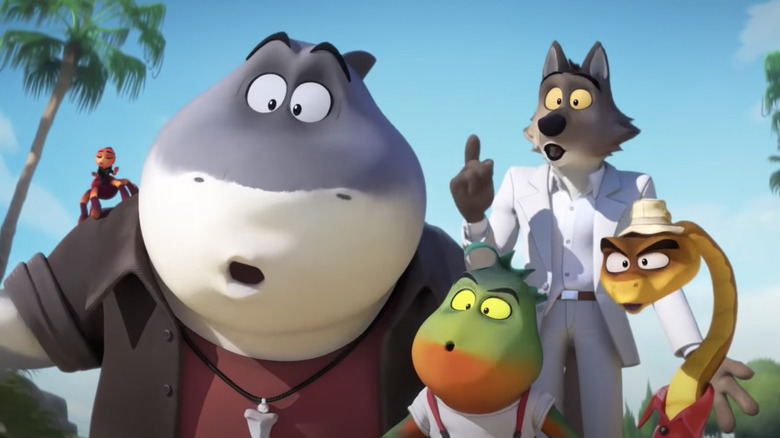 This week’s releases include a fun heist movie; an outdoor escape room; a haunted house; the King of Atlantis’ alternate story; and a brotherly drama.

Aquaman starts his first day on the job as King of Atlantis — and he’s got a lot of catching up to do. Luckily, he has his two royal advisors to back him up: the scholar Vulko, and Mera, the water controlling warrior princess. Between dealing with unscrupulous surface dwellers, elder evils from beyond time and his own half-brother who wants to overthrow him, Aquaman must rise to the challenge and prove to his subjects — and to himself — that he’s the true heir to the throne and holder of the trident.

This is a three-episode miniseries produced by James Wan, who directed the live-action Aquaman picture. Visually, it’s very much like the Steven Universe series — bright, bubbly with squarely-shaped characters. The 40-minute stories are kind of goofy as the King of Atlantis has difficulty adapting to his new role and its idiosyncrasies. In the first few minutes of the opening episode, he has trouble winning over his new constituents, can’t figure out how to sit on the sea-inspired throne and briefly loses the crown to a challenger. Yet, there are staples, including fun conversations with fish and Mera’s entertaining water displays. There’s also music and some serious notes via his own self-doubt and constant threats to his reign.

There are no special features. (Warner Bros. Home Entertainment)

Never have there been five friends as infamous as “The Bad Guys” — Mr. Wolf (Sam Rockwell), Mr. Snake (Marc Maron), Mr. Piranha (Anthony Ramos), Mr. Shark (Craig Robinson) and Ms. Tarantula (Awkwafina). After years of countless heists and being the world’s most-wanted villains, the gang is finally caught. Mr. Wolf brokers a deal with Diane Foxington (Zazie Beetz) and Professor Marmalade (Richard Ayoade) to keep them out of prison, and the Bad Guys set out to fool the world into believing they’ve gone good.

This is an amusing animated film about an animal Ocean’s Eleven. It’s not a coincidence that each of their species have a bad rap as many people irrationally fear them, so they’re just living up to their reputations. Conversely, the sly fox uses her cleverness for politics, becoming the Governor of California, while the innocuous guinea pig is a pillar of goodness in the community. It’s obvious where this story will end as the crime team enjoy pretending to be good and one of them even begins to have an identity crisis. But there’s also an underlying scheme unfolding that threatens to turn everything on its head. The voice cast is stellar, each fitting their respective cartoon personalities, with Rockwell’s suave Wolf topping the list.

The Beatles and India (Blu-ray)

Rare archival footage, recordings and photographs, eye-witness accounts and expert comments along with location shoots across India, bring alive the fascinating journey of George, John, Paul and Ringo from their high octane celebrity lives in the West to a remote Himalayan ashram in search of spiritual bliss that inspires an unprecedented burst of creative songwriting. It is the first serious exploration of how India shaped the development of the greatest ever rock band and their own pioneering role bridging two vastly different cultures.

In spite of not being able to speak to any of the individuals at the story’s core, the documentary still manages a deep dive into this period of Beatles history. Even though the band would split up a couple of years later, it was following this trip that they would release one of their greatest records — the White Album. Trying to escape their fandom was no easy task as they’d reached the height of their popularity, but they yearned for peace that Yogi promised he could deliver. It’s unfortunate so much ugliness would follow these events as scandals arose, questioning Yogi’s motives and authenticity. Filmmakers skillfully use rare archival footage to capture the band’s experience, while interviews with others who lived through the events provides first-hand accounts, even if from an observer’s viewpoint.

There are no special features. (MVD Visual)

Keira Woods’ (Elisha Cuthbert) daughter mysteriously vanishes in the cellar of their new house. She soon discovers there is an ancient and powerful entity controlling their home that she will have to face or risk losing her family’s souls forever.

It’s always somewhat astonishing when a family doesn’t run at the first inkling of an evil entity inhabiting their house — but then we wouldn’t have all these scary movies about hauntings. The kids’ unusual behaviour is an instant sign not all is well, but by then it’s too late. The family becomes tied to the house when they believe one of the children is trapped somewhere inside of it, guarded by a satanic beast. The background story to the strange phenomenon is unexpectedly interesting and could’ve been its own narrative rather than a supporting tale. However, since the origin story isn’t wholly fleshed out, the conclusion is a bit weird and difficult to embrace. There was definitely a good concept in there, but it’s buried beneath the haunted house element.

Special features include: commentary by director and producer; interviews with cast & crew; The Cellar VFX before & after; and “The Ten Steps” short film & commentary. (RLJE Films)

Six strangers suddenly awaken in a remote, endless cornfield. Stripped of their possessions, they are left with only six items: a gun with a single bullet, matches, a lantern, a knife, a compass, and a flask of water. As mysterious sirens blare in the distance and traps appear at every turn, the group realizes it’s been plunged into a cat-and-mouse game with an unseen evil, and survival depends upon solving a diabolical — and deadly — puzzle.

This movie has a heavy escape room vibe as a group of strangers find themselves in an elaborate game or experiment that will kill them if they’re not careful. Distrust within their ranks is one of the biggest threats as their individual objects force them to work together and rely on total strangers. The selection process is unclear, though there are some theories audiences can debate afterwards. Parts of the narrative feel a bit forced as the creators clearly had dynamics they wanted to play out and an ending already in mind. The mysterious presence that’s also stalking them is an added element that both seems to go on an unnecessary tangent, as well as serve as the source of another potential hazard. In the end, this is a film that offers more questions than answers.

Jack (Jeff Bridges) and Frank Baker (Beau Bridges) are stuck in a rut. Playing the same tired tunes night after night; the brothers are in desperate need of change. So, when they meet a sultry songbird named Susie Diamond (Michelle Pfeiffer), their future starts to sparkle. But when life in the limelight brings old rivalries to the surface as Jack and Susie’s relationship heats up, the Baker boys soon find their act — and their lives — growing more entertaining than either of them may be able to handle.

This is the only movie the Bridges brothers ever acted in together. Beau, who is eight years Jeff’s senior, naturally fits into the role of the older sibling. It’s obvious Jack hates their day-to-day, but he can’t leave his brother high-and-dry. Conversely, Frank is convinced Jack needs him to run everything because otherwise he’d be lost and spiral out of control. Then Susie comes along and injects new energy into their act, and it’s difficult to determine if Jack is trying to sabotage their newfound success by pursuing her or if he’s genuinely interested. Pfeiffer, in the meantime, slips into her role perfectly, though Susie is not the typical lounge singer and must be gradually molded into their ideal frontwoman. In the end, they’re all great entertainers and the shows are appealing, while the conclusion is satisfying for everyone.

In this article:Aquaman: King of Atlantis, Blu-ray, DVD, Escape the Field, Movie, Movie review, The Bad Guys, The Beatles and India, the cellar, The Fabulous Baker Boys, Tv series