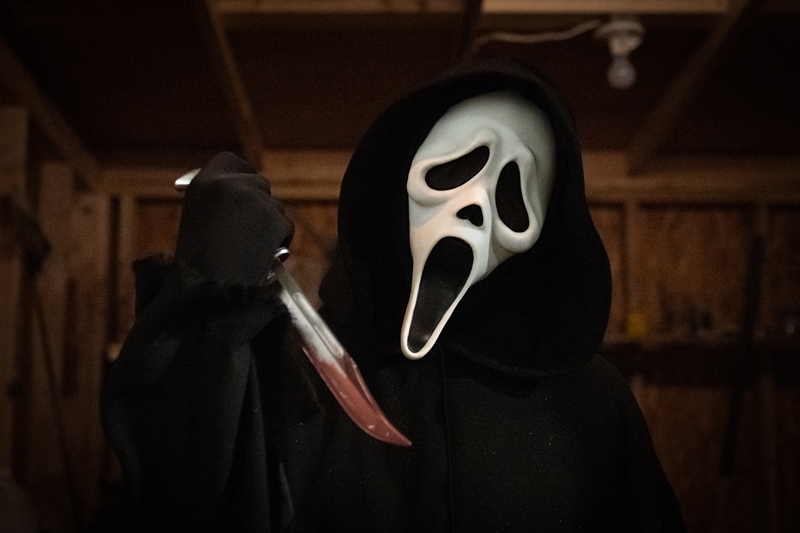 This week’s releases include another chapter in an iconic horror franchise; a dark turn of events in a thrilling drama; a good effort horror movie; and a touching romance that struggles with storytelling.

A Journal for Jordan (Blu-ray)

Based on the true story of First Sergeant Charles Monroe King (Michael B. Jordan), a soldier deployed to Iraq who begins to keep a journal of love and advice for his infant son. Back at home, senior New York Times editor Dana Canedy (Chanté Adams) revisits the story of her unlikely, life-altering relationship with King and his enduring devotion to her and their child.

This is a moving narrative, but it is very slow. Dana and Charles don’t appear to be the most compatible couple as their relationship is complicated by his service and their interests are very dissimilar. Yet, they find a way through their differences to enjoy short-lived, intermittent happiness. It’s far from a fairy tale, but Jordan and Adams’ chemistry go a long way in supporting the story’s romantic element. However, jumping back and forth between timelines as their son discovers his father and looks for his guidance via his journal is trying. Denzel Washington appears to be an actor’s director as the performances are excellent, which makes it even more unfortunate that the film is somewhat of a struggle to watch.

June (Elisabeth Moss) strikes back against Gilead as a fierce rebel leader, but the risks she takes bring dangerous new challenges, and her quest for justice and revenge threatens to consume her.

June has repeatedly chosen to stay in Gilead until she can rescue her daughter, but this season suggests there may be more behind her decision to avoid freedom. After “Angel Flight,” June and the other fugitive handmaids go into hiding, where they encounter more women being abused by men and this horrific system. Unsurprisingly, June grows determined to empower and/or free them at any cost. In the meantime, Serena and Fred (Yvonne Strahovski and Joseph Fiennes) are weighing their hate for each other against their odds in the legal system as they face prosecution for their many crimes. Also in Canada, Moira (Samira Wiley) questions the effectiveness of their humanitarian efforts and the cost of her guilt regarding June. It’s satisfying to see some of the villains get their comeuppance, even if it is only briefly in some cases. However, the season finale is one of the series’ darkest moments and raises a number of questions for the next chapter, particularly about June and her motivations.

Special features include: “One Burning Question” for each episode. (Warner Bros. Home Entertainment)

While searching for the parents she’s never known, New York transplant Grace (Scout Taylor-Compton) returns to her childhood southern stomping grounds with her boyfriend, Jack (Nolan Gerard Funk), to investigate a promising lead on her family’s whereabouts. Upon arrival, the couple’s weekend takes a bizarre, terrifying turn as a nightmarish cult and their maniacal leader terrorize the pair enroute to fulfilling a twisted ancient apocalyptic prophecy.

The opening of the film is not very informative as audiences may feel unsure of the stability of Grace and Jack’s relationship, particularly as the first time she meets his family is summarized in a brief argument between the pair in spite of earlier build-up. Instead, the narrative begins when they arrive at the home of the mysterious person who contacted Grace about her family. To their credit, when things start getting weird, the couple actually tries to leave almost immediately rather than wait until morning or some other poor excuse that would unquestionably cost them their lives. The cult appears quite menacing with their bony masks, and their ability to reach them without even entering the house is more frightening. The narrative direction is obvious early on, though it does raise some additional questions regarding Grace’s adoption. It’s a solid thriller through the second act, but then loses momentum.

Twenty-five years after a streak of brutal murders shocked the quiet town of Woodsboro, a terrifying new killer resurrects the Ghostface mask. As the deaths mount, Woodsboro’s new targets must seek help from the survivors of the original Ghostface attacks. Now, only Sidney Prescott (Neve Campbell), former sheriff Dewey Riley (David Arquette), and reporter Gale Weathers (Courteney Cox) can find a way to stop the killer when everyone is a suspect.

It’s time to go back to Woodsboro where Ghostface is once again targeting unwitting teens, though their connection to the earlier murders, if any, is not immediately obvious. What is clear is the filmmakers’ appreciation for Wes Craven’s work, from this franchise and beyond. Fans of the first film — and its sequels to a lesser extent — will spot countless nods to the earlier pictures, from the score to wardrobe to specific frames. The film is still self-aware, but in a different way as a new cast of characters must face the masked killer, while legacy personalities play a supporting role. Although not everyone will enjoy the many tributes to the Craven’s franchise, it can be very endearing and provide fun Easter eggs for fans — outside of trying to play by the rules and identify the killer before the reveal.

Special features include: filmmaker commentary; deleted scenes; “Bloodlines”; “New Blood”; and “In the Shadow of the Master.” (Paramount Home Entertainment)