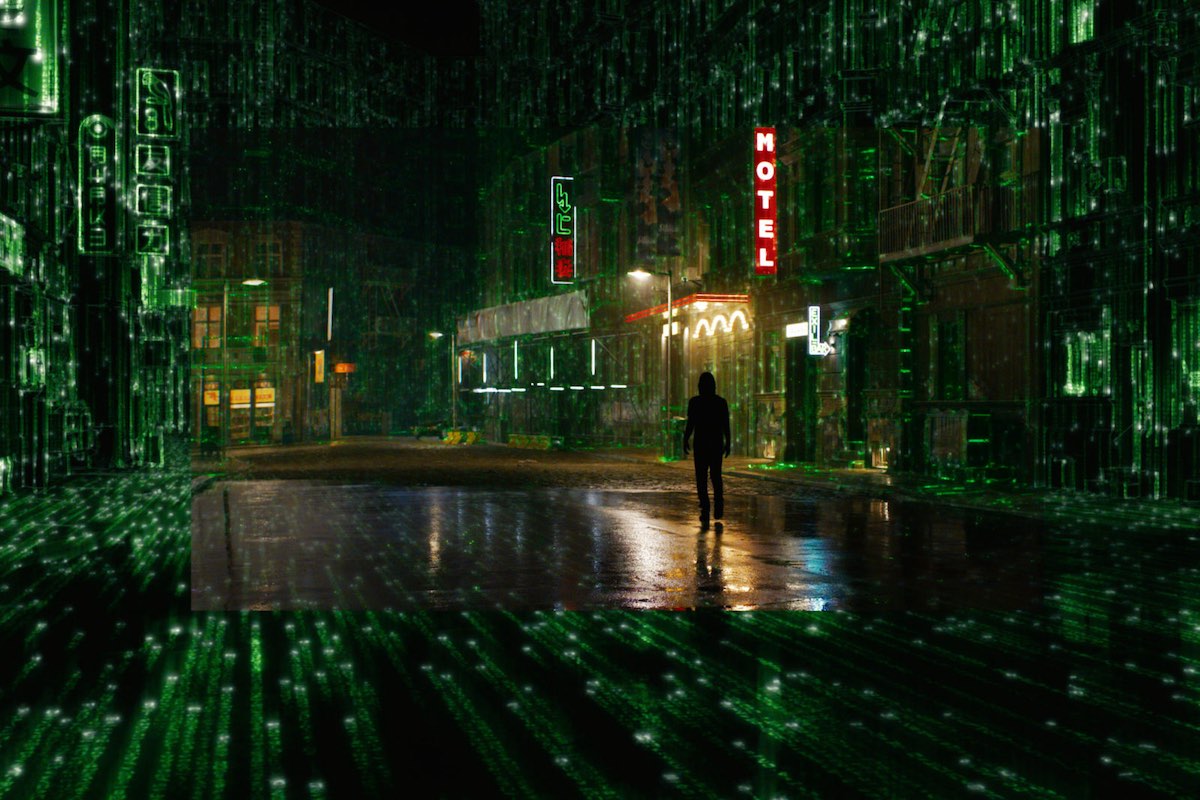 This week’s releases include an unexpected sequel; a blending of genres; the fates of a TV family; a fantastical series; a comedy reunion; a movie spin-off; and a blurring of lines between real and imaginary.

After the disappearance of his daughter six years ago, Guan Ning (Jiayin Lei) descended into despair. With nothing left to lose in his life, he is approached by a powerful corporation who hires him for a dark task — to kill the young author of a fantasy novel. But the author’s work is no ordinary book for its fantastic world is somehow impacting and merging with the real one. Guan’s journey into this realm uncovers hidden secrets… and reveals the transformative power of art and imagination.

The story is somewhat convoluted as the fantasy world and reality intersect, and the characters’ paths become less linear. Though, the real world is not exactly like the one audiences know either as there are people with superhuman abilities. Guan’s search for his daughter is both admirable and pitiful as his commitment to finding her has turned him into a shell of a man. Conversely, connecting with the author awakens something in him and gives him a new lease on life. In the meantime, families in the war-torn imaginary world are torn apart by powerful forces as giants and Silent Hill-esque warriors threaten to destroy everything and everyone. It definitely demands the viewer’s attention to effectively follow along, but the characters are quite captivating.

There are no special features. (Shout Studios)

Set in a hidden world where magic is real and gods exist on earth, the TV series chronicles the brewing war between Old Gods and New Gods, as the traditional gods of mythology are steadily losing believers to a burgeoning pantheon of modern gods focused on technology and money. The story across three seasons centers around ex-convict Shadow Moon (Ricky Whittle), bodyguard for the mysterious Mr. Wednesday (Ian McShane), an Old God trying to rebuild the power and influence the Old Gods once had. As events unfold and Shadow struggles with his identity and place in the world, the show examines humanity’s conflicted relationship with faith and the unknown.

This TV series is based on Neil Gaiman‘s award-winning book of the same name. Sharing several of the themes first seen in his comic book series, The Sandman, the story was largely thought to be unfilmable, but a high-production TV show seems well-suited to the multi-faceted tale. Each episode of the first season includes the ancient tale of a god or people who encountered a deity, providing audiences with a greater understanding of the story world. This is not a show you can watch casually. It requires the viewer’s full attention as brief glances, innocuous words and split-second decisions can have monumental consequences. Characters like Laura Moon (Emily Browning), Mad Sweeney (Pablo Schreiber), Czernobog (Peter Stormare), Mr. Nancy (Orlando Jones), Mr. World (Crispin Glover) and others also keep the story’s interesting. Unfortunately, not a lot is resolved in the final season, but things are made more complicated — particularly as Shadow and Laura try to navigate their destinies.

Newly crowned King Akeem (Eddie Murphy) and his trusted confidante Semmi (Arsenio Hall) traverse the globe from their great African nation of Zamunda to the borough of Queens, New York once again when Akeem learns he has a long-lost son, Lavelle (Jermaine Fowler), in the United States.

It’s been more than 30 years since audiences first met Prince Akeem as he stumbled through his inaugural visit to America, working at McDowell’s and wooing his soon-to-be queen, Lisa (Shari Headley). Being King isn’t without its issues as the neighbouring General Izzi (Wesley Snipes) challenges Akeem’s power, and insists on a marriage to unite their families and resources. Of course, the fact that Akeem’s daughters are prohibited from inheriting the throne in spite of the eldest’s competence is pretty obvious foreshadowing to the conclusion. In the meantime, Lavelle’s preparation for the throne is non-traditional and finds a perplexing ally. While the plot is not as inherently funny as the previous picture, seeing the entire original cast return — with the additions of Leslie Jones and Tracy Morgan — as well as Murphy’s and Hall’s bonus characters, such as the barbershop crew and Randy Watson, is amusing enough. There are also excellent cameos by En Vogue, Salt-N-Pepa, Gladys Knight, Morgan Freeman, Trevor Noah, John Legend, Louie Anderson and Colin Jost.

Return to a world of two realities: one, everyday life; the other, what lies behind it. To find out if his reality is a physical or mental construct, to truly know himself, Mr. Anderson (Keanu Reeves) will have to choose to follow the white rabbit once more. And if Thomas — Neo — has learned anything, it’s that choice, while an illusion, is still the only way out of — or into — the Matrix. Of course, Neo already knows what he has to do. But what he doesn’t yet know is the Matrix is stronger, more secure and more dangerous than ever before. Déjà vu.

When learning about a fourth Matrix movie, most people likely had the same reaction Reeves had when called by Lana Wachowski:  But they’re dead! Of course, in this world that defies our understanding of what is and isn’t, anything is possible. The approach to reviving these beloved characters is interesting as Neo and Trinity’s (Carrie-Anne Moss) love affair is revealed to be at the film’s core. It also produces the most rewarding moment in the movie as Trinity is finally given her due after years of being confined to just being the woman behind “The Chosen One.” The film finds appealing ways to incorporate and acknowledge its past, creating a meta-narrative that becomes increasingly self-aware as the story unfolds. However, outside of the audience’s enduring adoration for Neo and Trinity, some may find at times the only other element keeping them anchored in the movie is (Neil Patrick Harris) as his standout performance serves to reconnect viewers to the picture when it’s stumbled too far into the rabbit hole.

Special features include: “No One Can Be Told What The Matrix Is”; “Resurrecting The Matrix”; “Neo x Trinity: Return to the Matrix”; “Allies + Adversaries: The Matrix Remixed”; “Matrix for Life”; and “The Matrix Reactions.” (Warner Bros. Home Entertainment)

Tokyo, 2021. A high-ranking government official is killed when his chauffeur loses control on an expressway. Detective Kento Saegusa (Kentaro Sakaguchi) suspects it was far from accidental. Meanwhile in 2009, parliamentary officials are dying in a succession of fatal car crashes. While the police write them off as accidents, Detective Takeshi Oyama (Kazuki Kitamura) is the only one convinced of foul play. This time, Saegusa and Oyama are forced to go up against corruption in their own home: the police force. Will they finally reunite in the present?

This movie is an extension of the Japanese TV series, Signal: Long-Term Unsolved Case Investigation Team, which was a remake of a South Korean show of a similar name. It features the same cast and a recap at the start of the film for those unfamiliar with the characters or plot. The concept of solving crimes across time is a curious approach to detective work as the pair share information found during their respective investigations. Even though the series only lasted one season, it’s still difficult to connect to the characters without the backstory. Fortunately, eventually the case takes over and it’s just like watching another ticking-time-bomb procedural, but with a time-travel twist.

There are no special features. (Eleven Arts & Shout Factory)

Nell (Keira Knightley) and Simon (Matthew Goode) have invited their closest friends to join their family for Christmas dinner at their idyllic home in the English countryside. As the group comes together, it feels like old times — but behind all of the laughter and merriment, something is not quite right. The world outside is facing impending doom, and no amount of gifts, games or Prosecco can make mankind’s imminent destruction go away. Surviving the holidays just got a lot more complicated.

The narrative takes this familiar “home for the holidays” trope and points it in an entirely new direction. The film begins with the typical chaos as the host family prepares for everyone’s arrival — trying to finish all the food preparation, getting the children bathed and making sure the rooms are ready. Each group’s entrance is met with warm hugs… and gloomy affirmations of a mysterious agreement. It’s some time before the magnitude of the evening is revealed, though clues are dropped via various conversations and newscasts. This is an unusual picture because it combines two contradictory genres with remarkable ease. The ensemble cast does a wonderful job drawing audiences into this story with their laughter and tears. Freshman writer/director Camille Griffin’s film lacks the pessimism that generally dominates this type of movie, making it feel simultaneously refreshing and contradictory.

The epic story of a multi-generational family that controls the largest contiguous ranch in the U.S. In season four, the fates of Kayce (Luke Grimes), Beth (Kelly Reilly), and John Dutton (Kevin Costner) are unknown as Rip (Cole Hauser) and the other wranglers wield their own brand of justice to take revenge and defend the Dutton legacy.

The explosive ending of season three had immediately built a lot of anticipation for this new season and it doesn’t disappoint, beginning where it ended — with an attack on the family in progress. Unsurprisingly, each member reacts differently to their near-death experience. One is on a mission to make it safe for them again by eliminating their assailants; another becomes even more ruthless in their quest to protect the ranch; and another reflects on their age, legacy and family ties. One of the more interesting aspects of this season is its focus on Jimmy (Jefferson White), who also ended the previous season on a cliff-hanger. His evolution is a major part of this season, which features more of creator Tyler Sheridan’s cowboy character as well.

Special features include: “Opening Pandora’s Box: Making Yellowstone Season Four”; “Bloodline: Yellowstone Origins”; “Season 4: Back to the Bunkhouse”; “Working the Yellowstone: Making it All Happen”; “Inside Yellowstone: Season 4”; “Behind the Story”; and “Stories from the Bunkhouse.” (Paramount Home Entertainment)